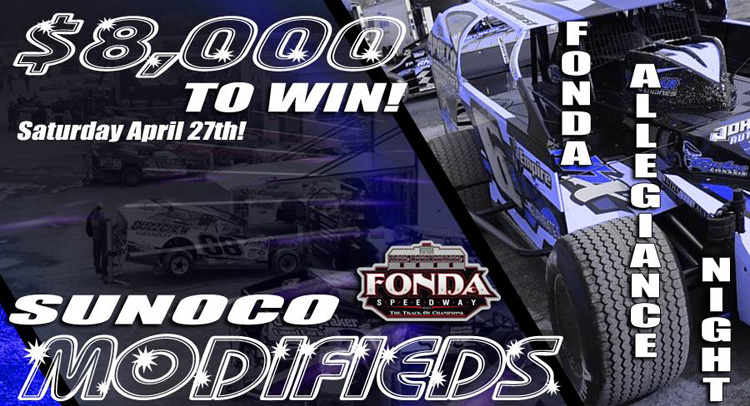 FONDA, NY – According to the dictionary, the definition of the word Allegiance is “loyalty or commitment of an individual to a group or cause”.

On Saturday April 27, 2019, the “Track of Champions” welcomes you to join us for “Fonda Speedway Allegiance Night” & Season Opener! Let’s fill the famed Fonda grandstands with all that old & new Fonda Speedway racing apparel! Let’s show the racing world that Fonda Speedway is back! Our Fonda Speedway store will be open on Saturday and throughout the 2019-racing season so you can pick up some brand new Fonda Swag!

After a rainout last Saturday April 13, Saturday, April 27 will now serve as Opening Night for the 2019 racing season at the Montgomery County Fairgrounds half mile track and on this night the Sunoco Racing Modifieds will be competing for a top prize of $8,000! To sweeten the pot for our loyal Fonda Speedway Sunoco Racing Modifieds on this night, the Modified feature will be a 30 lap main event! No extra laps with big money on the line!

Joining the Modifieds on April 27 will be the Crate 602 Sportsman ($1,000 to win – (thanks to Eric Orozco Racing), the Montgomery County Office for the Aging Inc. Limited Sportsman, Pro Stocks ($1,000 to win), the Trackside Auto Body Works Street Stocks and the Four Cylinder Cruisers!

The Fonda Speedway Hall of Fame and Museum will be open at 3:30 p.m. on Saturday afternoon with a Meet & Greet starting at 4:00 p.m. with 2018 Track Champions Bobby Varin (Modified), Chad Edwards (602 Sportsman), and Kenny Gates (Pro-Stocks). Admission to The Hall of Fame & Museum is FREE!

Last season, the final car prepared for Fonda Speedway legend Jumpin’ Jack Johnson made its way back to the Fonda Speedway Hall of Fame and Museum for the first time since 2014. We are pleased to announce that it will be back for 2019.

Thanks to longtime Fonda Speedway supporters – Alton and Carole Palmer – the famous #12A will once again call the Montgomery County Fairgrounds home. So be sure to stop by and see us starting this Saturday at the Fonda Speedway Hall of Fame and Museum, where the past comes back to life!

ALLEGIANCE ALERT: Stewart Friesen declares his allegiance this Saturday night and will be competing in the Fonda Speedway Allegiance Night/2019 Season Opener in search of the $8,000-to-win Sunoco Racing Modified checkered flag! “Mr. Freeze” has three opening night wins at the Fonda Speedway in 2015, 2016, and 2018!

Friesen is currently tied for fifth on the All Time Fonda Speedway Modified win list with Kenny Shoemaker, both having 54 wins to their credit. Friesen accomplished his win total in just eight seasons at Fonda, his first career win coming on 7/27/10 and his last win coming last year on 8/4/18. He also has one 358-Modified win at Fonda, which is part of a separate All Time win list, that victory coming last year on 9/21. Friesen was also crowned the Modified Track Champion at Fonda for four consecutive seasons in 2012, 2013, 2014, and 2015!

INVADER ALERT: With $8,000 on the line for Saturday night’s Sunoco Racing Modified feature event at Fonda, Billy Pauch Racing has set plans to attend the Fonda Allegiance Night / Season Opener. Likening Fonda’s unique layout to his beloved Flemington Speedway, “The Kid” is ready for a rare New York State start this weekend! Pauch has two victories to his credit at Fonda, both coming back in 1985 on 8/20 and 9/28!

ROAD TRIP: Milford, Delaware’s Jordan Watson Motorsports is on the heels of a championship-winning season at his home track of Delaware International Speedway. This weekend, Watson plans a road trip from his First State residence to compete in the $8,000-to-win Sunoco Racing Modified event during the Fonda Speedway Allegiance Night/Season Opener!