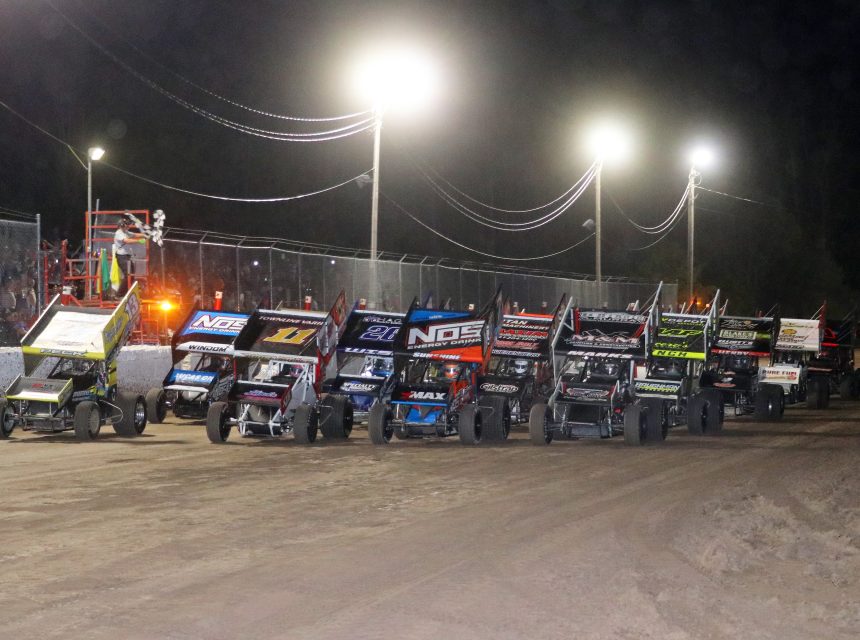 Fonda, NY – With much anticipation, the Tezos All Star Circuit of Champions (ASCoC) presented by Mobil 1 released their schedule for the 2023 410 Sprint car racing season according to a press release on Thursday, December 1. Unveiled that day was a 50-race slate for the 2023 season, all of which will be kicking-off in traditional fashion with their annual southern swing through Georgia and Florida on February 3-14.

Diverse as well as competitive, the 2023 All Star agenda boasts a travel plan that features 33 different facilities across 11 states. In addition to the visits to Georgia and Florida, America’s Series will trek through Ohio, Pennsylvania, New York, Wisconsin, Iowa, Illinois, Missouri, Michigan, and New Jersey during the new year.

When the schedule was unveiled on Facebook and other media outlets, local race fans took notice as the Tezos All Star Circuit of Champions (ASCoC) presented by Mobil 1 will invade the Montgomery County Fairgrounds facility for the first time in ten years on Saturday, May 20, 2023 with drivers competing for $10,000 to win!

The visit by the ASCoC marks the ninth time in Fonda Speedway history that 410 Sprint Cars have competed at the “Track of Champions”, with each of the previous four events falling under ASCoC sanctioning.

Formed in 1970 by Bud Miller, the series has largely been considered the first “outlaw” Sprint Car organization of the modern era. After a 10-year stint as owner of the All Stars, Miller passed control of the series to Bert Emick in 1980; a reign that would continue through 2002. Guy Webb then purchased the series from Emick in the summer of 2002 and served as the series President for the next 12 years.

Motorsports entrepreneur Tony Stewart agreed to terms with Guy Webb to become the sole owner of the original winged sprint car tour in January of 2015. Stewart and his team look forward to building on the All-Star Series impressive legacy by taking it to a new level of success and sustainability.

“We had objectives to accomplish while working through the scheduling process for the 2023 season”, said Tony Stewart, owner of the All Stars in a press release about the 2023 schedule. “We made a concerted effort to desaturate certain markets to facilitate a hopeful improvement in the demand to attend our events. Further, we continue to pursue partnerships with increased purse payouts for the race teams. Once again, we appreciate the support of the many track owners and promoters in scheduling an All-Star event or events with us in 2023.”

“We’re really excited about what we were able to put together for 2023”, Stewart continued. “We feel it’s a great mix of our staple events, combined with some new dates for some tracks, sprinkled in with a handful of visits to tracks that have either never been on our schedule or we haven’t visited in a few years. We’ll be anxious and ready to head down to Georgia at the end of January.”

The 410-Sprint cars produce incredible speeds, and this night was no different as the World of Outlaw Gumout Series invaded the Fonda Speedway with Tyler Walker setting a track record of 15.281 for an average speed of 117 MPH! Walker led the race up until just before lap 10 was completed when a flat left rear tire forced him to the pit area.

Walker’s crew got the tire changed without him going a lap down and he restarted the event at the rear of the 24-car field. Shane Stewart took the lead on lap ten and led the remaining laps for the win with Walker getting all the way back up through the field to finish third behind second place finisher Wayne Johnson.

Tyler Walker’s track record stood up until the second ever appearance of the All-Star Circuit of Champions 410-Sprint cars at Fonda 6/8/2011 when Fred Rahmer set a new record with a lap of 15.110 for an average speed of 119 MPH! The record came after a three-hour rain delay when the rain started to fall just as cars were going out for hot laps.

Tim Shaffer was running second to Rahmer up until the white flag was waving as the cars came out of turn four when Shaffer took over the lead and his first ever win at Fonda with Rahmer finishing in the second spot.

So, will we see another track record broken on Saturday, May 20, 2023 by the All-Star Circuit of Champions (ASCoC) 410-Sprint cars at Fonda? One thing is for sure, we will see exciting fast laps by the stars of the ASCoC whether or not a new track record is set. It will be a must-see event for sure!

Since 1953, the “Track of Champions” Fonda Speedway has hosted the best in stock car racing. Under the management of BD Motorsports Media LLC, the speedway will operate weekly on Saturday nights from April through August plus several special events. Fonda Speedway is located on the Montgomery County Fairgrounds off of New York State Thruway Exit No. 28 at 21 S. Bridge Street Fonda, NY 12068.

For more information about the Tezos All Star Circuit of Champions (ASCoC) presented by Mobil 1 please go to their website, www.allstarsprints.com