A TRIBUTE TO DAVE LAPE IN THEIR OWN WORDS 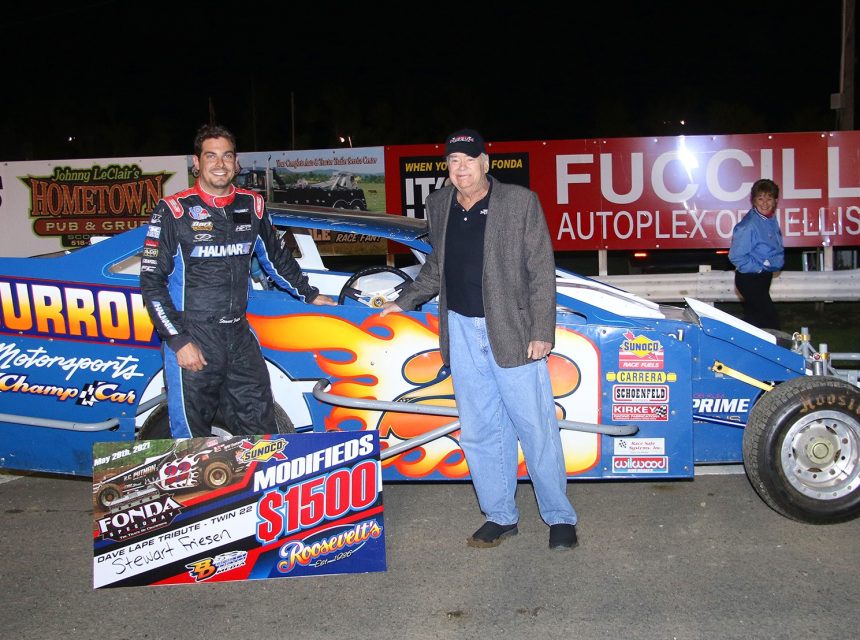 Fonda, NY – Last Saturday evening at the “Track of Champions” Fonda Speedway there were many special moments at the track during opening ceremonies for the 30th edition of the Fonda 200.

But the special moment that touched the hearts of all of the fans and everyone in attendance was the tribute to Dave Lape who recently passed away. Here are the thoughts of two of Dave’s family members and two very special friends who spoke about Lape on victory lane in their own words while the #22 Vintage Modified race car of Joe Rando sat on victory lane.

“Last week we lost a hero, a legend, a friend,” Lazzaro said to the crowd. “Mr. Dave Lape left us before we completed our 2022 racing season. Dave was a friend to all of us and we thank Dave for all of the memories and thrills that he gave us. He will continue to live through us because legends never die.”

“I was born on a Sunday after a rain out and I was back here six days old the next Saturday,” Lape-Schwab said. “We won the track championship that year so clearly, I’m a good luck charm. I would like to share the perspective of a driver’s daughter. Others may see a driver, a promoter, a Champ Car Fabricator, a speed shop owner, a competitor, but truly I just see my dad.”

“Growing up in my family was so different than other people that I knew. Typically, people would go to work and come home at the end of the day. My dad worked from home in the garage so he could make my school lunches, remind me to pick up my room, and welcome me home after school.”

“My parents worked as a team with the same goal and success. In my house I learned to be part of a team. My mother Jackie was a significant team member to my dad. On Saturday nights when we were here at Fonda and able to celebrate together that made the most precious memories. My parents modeled how marriage and life is a team sport.”

“Racing has taught me the significance of kindness, gratitude, help, communication, and the value of relationships that are developed during a life. Racing is a family, let’s keep working together towards a goal to keep this sport alive and thriving.”

“David’s goal when he wasn’t as competitive as he wished he could be, was to just be here at Fonda, and there are probably a few people that got a little sick on the one lap Lape,” she said. “But he didn’t care because he was here, he wanted to make it to 50 years at his home away from home, so we kept going and we made the best of it and I’m glad we did that.”

“What I want to say is that we were most excited and happy that Fonda Speedway was back. We watched it for years going downhill but look at what Brett (Deyo) has done, look at this track, look at this place. Brett, I hope that you are here for 50 years and thank you, I am so proud.”

“With Dave being here for 50 years, one of the drivers that never left, he never went out on the road or somewhere else on a Saturday night, the only time he left was when there was a race somewhere else,” Biittig Sr. said. “Otherwise, David Lape was here, if David Lape had chosen to race rough like others, he may have had 200 wins. But he chose to drive his car in the hauler every night and not have it in pieces.”

“He had respect for everyone that was involved in racing. As far as I’m concerned, there were three amigos here and now they are all in heaven. Lou (Lazzaro), Jack (Johnson), and David (Lape), those three did so much for this speedway, they are the history of this speedway.”

“If you want to know something that you can do in Memory of David Lape between now and next spring when we return to this racetrack, get a piece of paper out and write 1-22 on it. Then do 22 acts of random kindness of any kind whether it be to shovel a person’s sidewalk, walk a person’s dog, making sure that a neighbor has groceries, anything.”

“It is one of those things that we can do for the Memory of David Lape and that is very important because he was so very important to this place Fonda Speedway. David Lape was this speedway, and he gave so much of his life to it.”

Although I didn’t say anything about my friend and my hero Dave Lape the evening of his tribute at the track, I’d like to share some thoughts about him now.

When I was 10 years old my brother Jim took me to the Fonda Speedway for the first time. At the time my brother was driving a 1969 Camaro and when we got to the track, I identified Dave by the car that he was driving at the time. It was the red, white, & blue #22 Camaro that looked just like my brother’s car except for the colors. I became an instant fan and added a hero to the list that included my father, my brother, and my other family members.

I started a scrapbook and pasted in it all of the Dave Lape photos that I could find in those papers along with stories about races that he had won at any tracks that he competed at. When he won what was then called the Schaffer Qualifier at Fonda back on 7/31/1973 I purchased a photo of Dave and the Cadillac bodied car that he was driving at the time in victory lane and believe it or not got up enough nerve to go up and ask Dave for his autograph on the picture.

I still have the photo and for those of you that know me I am not one of the most outgoing or outspoken people out there, so it took a lot of nerve for me to go up and ask him for that autograph. Once I got the photo in a frame, I put it up on my dresser in my room with two checkered flags hanging behind it on the wall. It was my own personalized Dave Lape display.

In the month of June 1999, I was writing for Tracy Paige for Redline Magazine and had the chance to interview Dave about his racing career. I remember being just as nervous going to do that interview as I was when I asked him for his autograph on that picture of him and his race car back in 1973. It was a day that I’ll never forget, along with the day that Dave took a picture with me when he had his rebuilt #44B race car at the Fonda Speedway Museum and other memories that come to mind when I think of my racing hero Dave Lape.