MATT SHEPPARD WINS THE 30TH EDITION OF THE FONDA 200 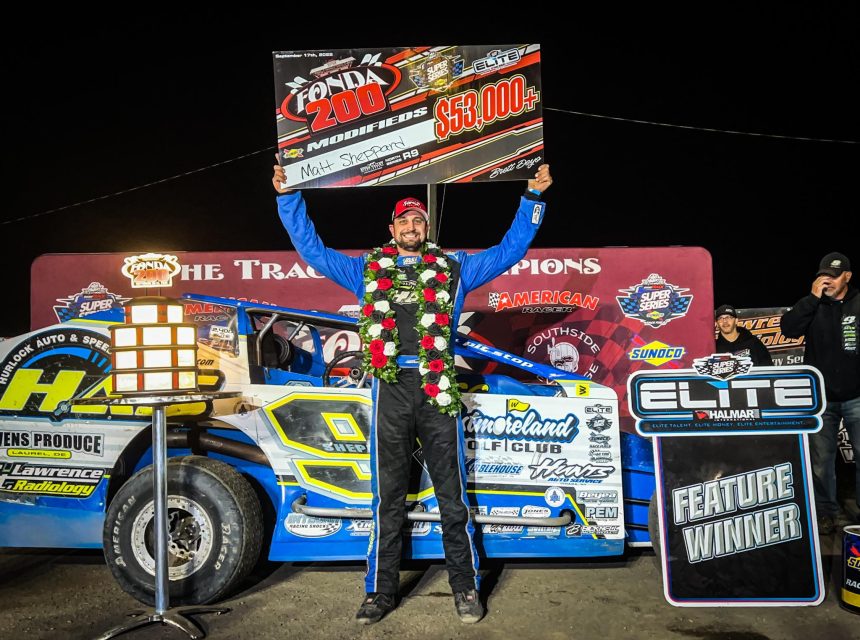 Fonda, NY – NASCAR or any of the big league motorsports sanctions had nothing on the “Track of Champions” Fonda Speedway on Saturday evening as they had all of the pageantry and special ceremonies as well including a tribute to the late Dave Lape, the starting field lined up on the front straightaway, driver introductions with the drivers walking down in front of the grandstands as they were introduced to greet the fans, a four wide salute by the starting field, and the vintage race cars of CD Coville, Jack Johnson, and David Lape pacing the field.

Then it was time to race in the prestigious Fonda 200 presented by Southside Beverage which saw its share of different strategies and twists and turns during the long-distance race. When the checkered flag flew it was “Super” Matt Sheppard the winner of the $53,000 prize in what he called the “crown jewel that we were looking for.”

Also in action on Saturday evening was the Swagger Factory Apparel STSS Crate 602 Sportsman with Cody Clark taking home the top prize after having to repair damage to the car when the left side short rod bracket got ripped off of the frame of the car taking all of the other parts on the left side of the car with it during his qualifying event. The crew was able to get it all back together allowing Clark to take home the win in the event.

The tribute to Dave Lape started off the evening with more on that coming later in a separate release. Pastor Greg Nitz said the prayer followed by the singing of the Canadian National Anthem by Joe Kriss. Mimi Lazzaro performed the National Anthem as the crowd sang along with her in a touching moment and then it was race time.

The top three starters Stewart Friesen, Bobby Hackel IV, and Max McLaughlin were three wide through turns one and two at the start with Friesen taking the lead going down the backstretch. The yellow was out with no laps completed for the Ultimate Underdog event winner from Thursday evening Jack Lehner going hard into the tire wall in turn three. His car sustained heavy damage but fortunately he walked away from the wreck.

Friesen led on the restart with fifth place starter Mike Mahaney the new second place car and when lap traffic came into play on lap five Mahaney was able to close in on Friesen. The action started getting hot and heavy after a caution on lap 16 with Anthony Perrego the new third place car after starting fourth. Laps 30-36 saw four changes to the race lead starting with Mahaney who took the lead from Friesen on lap 30 on the inside of the backstretch.

Perrego also got by Friesen for the second position at that point and took over the race lead briefly on lap 33 at the line to complete the lap. Friesen never dropped too far back however and went three wide around the outside of both Mahaney and Perrego to take the lead back two laps after that. Lap traffic made these passes for the lead very difficult but kept the leader close to the other competitors with Mahaney getting the lead back from Friesen on lap 36.

Everybody settled in at that point with the top five at the quarter race mark consisting of Mahaney, Perrego, Friesen, McLaughlin, and 11th place starter Matt Sheppard. On a restart after a lap 65 caution, Mahaney continued to lead the event while Friesen fell back to the ninth position. Mahaney held a straightaway lead on lap 77 with all cars racing around the bottom of the track at that point.

During a caution flag period on lap 89, Mahaney decided to go to the hot pit for adjustments to his race car handing the lead over to Perrego who led through to the halfway point with Sheppard the new second place car followed by McLaughlin, 23rd place starter Danny Varin, and Friesen who fought his way back into the top five.

At the halfway point competitors had a choice to either go to the infield for fuel only and a tire pressure adjustment or go to the hot pit for tires and adjustments to the race car. The first driver to go to the infield was Billy Decker who came out first as the leader of the second half after track prep was completed.

Decker led the next seven laps until lap 108 when Marc Johnson who also pitted on the infield and came out third for the restart, took the lead on the inside of Decker at the line to complete the lap. Decker was able to retake the lead three laps later but that was only for a brief time as Johnson went to the outside of him in turn four on lap 115.

At that point Sheppard, who restarted the second half of the race in the 13th position, was moving his way to the front, getting by Mahaney for the third position on lap 117. Sheppard was the new second place car two laps later after getting by Decker with Johnson now out to a straightaway lead. A yellow flag on lap 132 slowed the field and took away the big lead that Johnson had built up. On the restart, Sheppard took over the lead after getting by Johnson on the outside of turns three and four.

Lap 150 saw another caution slowing the field and under the caution Friesen went to the hot pit, coming out in 16th place for the restart. The yellow was back out on the restart, this time for Friesen, who went up in smoke on the front stretch ending his day. Mahaney and Perrego both got by Johnson for the second and third positions on the restart with only one more caution flag slowed the field through the last 50 laps.

The final caution came out with 10 laps to go with a single file restart putting Sheppard under control of the race followed in the top five by Perrego, Mahaney, Danny Varin, and Johnson in the top five. Sheppard got out of the groove in turns one and two with only a few laps to go allowing Perrego to close in down the backstretch, but then Perrego slipped up in turns three and four allowing Sheppard to get away and take the big win in the Hurlock Auto & Speed Supply #9 Bicknell car.

“I’m not really sure what happened,” Sheppard told Chris Moore in victory lane regarding the last few laps of the event. “I felt pretty comfortable but there with three or four laps to go I felt like the thing dropped down on the left rear and I thought that I was getting a flat tire. I was scared to death but then it kind of took back off.”

“We had a decent car all weekend, decent but not really good enough to win,” Sheppard continued. We just kept working on it and working on it and took one last stab at it during the halfway break. This thing came to life in the second half of the race, and I finally found the balance that I was looking for. Such a great season, and I can’t say enough about this whole team, but I can’t wait to see my picture on this trophy with all of the other winners.”

“He (Sheppard) really missed it in turns one and two there that one time and we closed in on him pretty good but down in three and four we got a little bit tight, and he gained on us,” Perrego said after finishing second. “Our car rolled really good there in the second half, but we were a little better in the first half. Obviously, a great night for us though to come home second. I was just biding my time, trying to be patient. I overdrove it one lap and fell one spot short.”

“Or you could say that I just got pushed out of the way,” Mahaney said regarding a pass by Sheppard after Chris Moore asked him about the top two cars making better adjustments than him at the halfway point. “They were a little faster, I felt like we were better in the first half of the race. That sure was a crap shoot when you sit there, you already made changes to the car, and then they do track prep. That’s a tough one and a real serious challenge so live and learn I guess.”

Bobby Varin was named the Hard Charger of the event after starting 40th and finishing 11th saying “We didn’t have the fastest car; I wish it was a little bit quicker but coming from 40th to 11th that’s not a bad run. Hats off to my crew, after blowing a motor on Thursday they busted their ass on this car for two days straight.”

The 25-lap Swagger Factory Apparel STSS Crate 602 Sportsman feature began with Cody Clark leading after the luck of the draw placed him on the pole position for the start. Fifth place starter Troy Zilles moved into the second position on lap four with the caution out at that point for Tanner Warner who was in the wall in turns one and two.

Clark chose the outside for the restart and held the lead with sixth place starter Payton Talbot moving up to the third position on lap nine after getting by Jeremy Tyrrell. Clark was in lap traffic on lap 11 when the caution came out again, with Clark again choosing the outside on the restart. Zilles was the new race leader on the restart with 16th place starter Tim Hartman Jr. the new third place car behind Clark.

One more caution came out on lap 16 and this time Clark got the best of the restart, taking the lead away and going on for the win in the Upstate Motorsports #4 DKM car, his fourth of the season and the 17th of his career at Fonda. Zilles, Hartman Jr., 12th place starter Michael Ballestero, and Talbot completed the top five.

“When I came in after the heat race, I had no idea if we were gonna be able to make it out for the feature,” Clark said in victory lane. “All the guys from DKM along with guys from other race teams came over to help, it’s amazing how other people come and help out everybody. We’ve had a decent year in my book, a lot of bad luck more than anything, we put a lot of preparation coming into this race, all we wanted to do is win and end the year on a good note, so we were able to do that.”

Keep track of off-season news and plans for the 2023 racing season by going to the Fonda Speedway website or Facebook page.