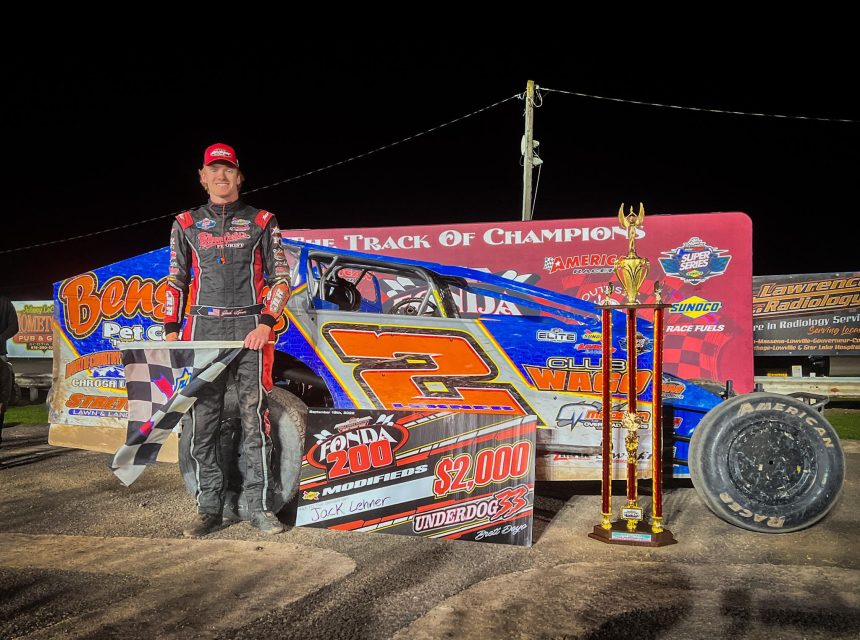 Fonda, NY – Day 1 of the 2022 Fonda 200 weekend presented by Southside Beverage saw the #2 Benson’s Pet Center Modified of Jack Lehner in victory lane for his first win of the 2022 season and the second of his career at Fonda. Lehner’s first win at Fonda was back on 5/1/2021 in the Nelson Motorsports #85 but last night the win came in his self-owned #2 powered by a motor borrowed from Paul Pinkerous.

“I have a lot of cool people that make this all happen for me and thanks to Paul Pinkerous, this is his motor that he let us use this week,” Lehner told Mimi Lazzaro in victory lane.

The “Ultimate Underdog 33” was a race that allowed anyone, from any track, to participate in if they didn’t have a win during the 2022 racing season. It also allowed a few of the Crate 602 Sportsman competitors to get some track time and experience running with the Modifieds.

The other event held on Thursday evening was a 20-lap event for the Montgomery County Office for Aging Inc. Limited Sportsman cars and it was Kyle Dingman taking home the $1,100 win in the Sickler Construction car #1D. For Dingman it was his fourth win of the 2022 season and the sixth of his career in the division at Fonda.

Special thanks to Holmes & Kugler Towing who contributed $1,000 to the winner of the event making it a big $1,100 payday for the competitors in the division.

Pastor Greg Nitz said a prayer before Stephanie May performed the National Anthem during opening ceremonies. Great job by all of the 50/50 girls with the winner Aaron from Fonda, NY taking home the $1,349 prize!

Jimmy Horton led the first lap from his outside front row starting position with the yellow flag coming out just after the first lap was completed for Ryan Odasz who was in the turn two wall. On the restart, Bobby Hackel IV was the new race leader with Horton dropping all the way back to the sixth position, Hackel pulling away to a straightaway advantage by lap five.

JaMike Sowle started the event in the fifth position and was running fourth before making a great move on lap six to get around both Chris Curtis and Jack Lehner for the second position. When George Foley slowed in turn four on lap eight, Lehner who was running third on the restart made his move into the second position as he got by Sowle with Ronnie Johnson also getting by Sowle for the third position after starting 11th.

The top three of Hackel, Lehner, and Johnson were nose to tail for the lead just before the halfway point in the event with Johnson getting by both Lehner and a lap car for the second position on lap 17. At the hallway point in the event Hackel, Johnson, Lehner, Sowle and 15th place starter Tanner Warner were in the top five with the race for the lead becoming a very interesting one as lap traffic came into play.

Warner’s great run came to an end on lap 18 when he suffered what looked like a flat tire, but it must have been more serious as he never re-entered the race from the hot pit. The top three continued their see saw battle to lap 22 when Lehner got by Johnson for the second position and began pressuring Hackel for the lead three laps later.

Coming out of turn four to complete lap 27, Lehner took the race lead away from Hackel and immediately pulled away to a straightaway advantage with only two laps to go. He led the rest of the way to Joe Kriss’ checkered flag for the win followed by Hackel, Johnson, Sowle, and 18th place starter Tyler Dippel.

“That was definitely a lot of fun,” Lehner said in victory lane. “It got kind of hairy with the lap cars not being sure which way they were gonna go so I think that played a big part in it. Bobby was running a good race there running the bottom and sliding across the track, I was hoping that would fade for him when the track slickened up, I felt really good on the bottom, so it just worked out for us.”

“You had to pick your lane wisely, I was pretty tight early but as the race went on, I felt like I was getting better and better so it kind of fell at the right time in the right place for us,” Lehner continued saying. “The new lighting is awesome, usually you can’t see a whole lot on the top of turns two and three, and three and four is kind of dark but it is lit right up now. It’s great that Brett (Deyo) did that, he’s always trying to make it better.”

27 cars started the 20-lap Montgomery County Office for Aging Inc. Limited Sportsman feature with Lance Hill the early race leader. Second and fourth place starters Zach Dufel and Butchie Irwin made contact at the start with Irwin getting the second position while Dufel dropped back to third.

Two consecutive yellow flags slowed the field one lap into the event and on the single file restart the top two of Hill and Irwin pulled away from the third place running Dufel. When something broke on the left rear of the leading car of Hill, it brought out the caution and handed the lead over to Irwin on lap five.

With one lap to go the red flag was out after EJ Gallup rolled his car over in turn four but landed on all four wheels and kept on going. Other cars were involved as well causing the red flag condition. Dingman got a good restart and led the final lap to the big win followed in the top five by Irwin, Dufel, Arnold, and Michael Kalkbrenner.

“When I ended up getting up to second with Butchie (Irwin) there, I knew that he’s been doing this stuff for a long time,” Dingman said in F.X. Caprara Car Companies Victory Lane. “My only thinking was I knew he was gonna fire there at the first sign and I just had to drive it harder into the turn. He did that but it stuck for me, and I drove out to a lead and never looked back after that.”

“It got a little scary there during that red flag on the front stretch, but the car was awesome and went anywhere that I wanted it to,” Dingman continued to say. “Thank you to my crew and sponsors and everyone that helps me, this is my final Limited Sportsman race. I’m moving up to the regular sportsman division next year, so this is definitely the way to go out.”

Day two of the 2022 Fonda 200 Weekend presented by Southside Beverage continues today (Friday) with qualifying events for the STSS Sunoco Modifieds for the Fonda 200, The Algonkin Motel Pro Stocks, the Fonda Fair Four Cylinders, the Street Stocks, and the CRSA Sprint cars with racing beginning at 7:00 p.m.