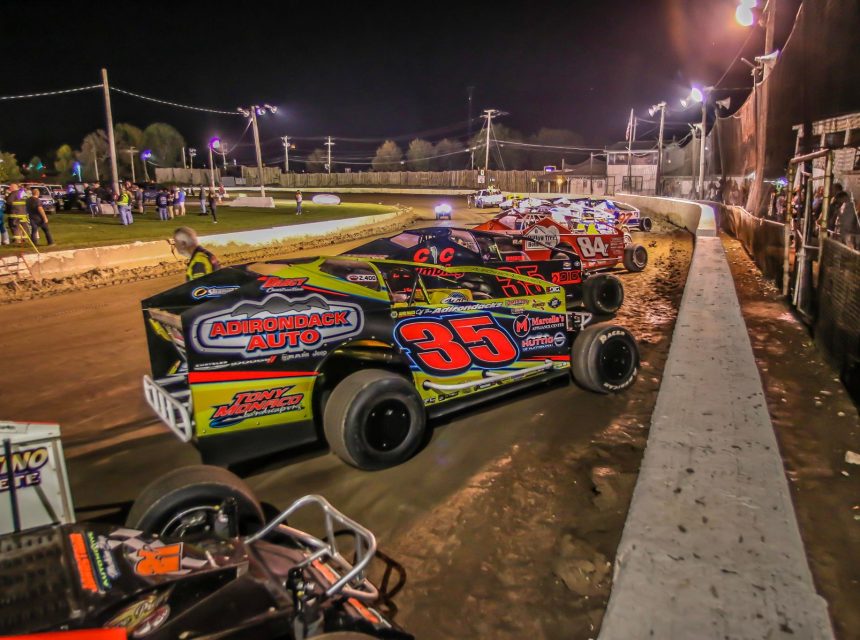 Fonda, NY – In a press release put out earlier this month, Fonda Speedway announcer Chris Moore said it best regarding the 2022 edition of the Fonda 200. “It’s Time.” The Fonda 200 weekend presented by Southside Beverage is just days away at the historic Fonda Speedway.

The stars of the Bob Hilbert Sportswear Short Track Super Series (STSS) Fueled by Sunoco clash with Fonda Speedway’s best in pursuit of a $53,000 grand prize.

The historic – and now annual – event serves as the richest winner’s share in Modified racing with a purse nearing $140,000 for Saturday’s main event.

On day one of Fonda 200 weekend 2021, Pittsfield Massachusetts driver Brett Haas started on the outside of the front row in the “Underdog 33” event, taking the lead at the drop of the green flag. He led every lap of the event through four caution flag periods and restarts, winning not only his first career victory at the Fonda Speedway but also his first win of the entire 2021 racing season in the Mac Tools #55.

A regular competitor at the Lebanon Valley Speedway, Haas finished third in the season long point standings without the benefit of a race win. The “Underdog 33” at Fonda was held with that in mind as it was for competitors from any racetrack who didn’t have a victory during the 2021 racing season.

“I’ve had some awful luck here,” Haas said in victory lane. “But tonight, I had a good draw, and I knew that I had a good car, so I was finally able to get the monkey off my back here at Fonda.”

On day two of the 2021 Fonda 200 weekend, the four qualifying heat races for the Fonda 200 were won by Matt Sheppard, Rocky Warner, Tyler Dippel, and Danny Varin.

The Algonkin Motel Pro Stocks ran a feature event that saw Kenny Gates lead every lap from his pole position start to take his second win of the 2021 season and the 85th of his career at Fonda.

“This is the shot in the arm that we needed,” Gates told Mimi Lazzaro in victory lane. “The car was on rails tonight and I could go anywhere that I wanted to with it. The track was prepared well, and I couldn’t be happier. Thanks to all of my sponsors and thanks to my long-time sponsor George Smith of School House Pools for all of his support through the years it has definitely been a great ride.”

Jordan Hutton led every lap of the CRSA feature event after starting on the front row for his first career win in the CRSA Sprints which was also his first career win at Fonda. “I’m so excited right now,” Hutton said in victory lane. “I ran the car wide open all race long and I don’t think I’ve ever had such a good car. Turn four was the most challenging here at Fonda. I almost went too high and out of the groove there many times tonight.”

Matt Mosher was the winner of the Street Stock feature, the first of his career at Fonda, taking the lead on lap 14 of the 20-lap event. “This is awesome,” Mosher said in victory lane about his first career win. “I broke a brake hub in practice and started last, but I was able to make my way to the front.”

PJ Bleau (DOHC) led the final ten laps of the Fonda Fair Four Cylinder feature for the overall victory with Ken Hollenback finishing second to take the win as a SOHC.

On day three of Fonda 200 weekend 2021, Chad Edwards got by Tucker O’Connor for the second position on a lap ten restart in the Swagger Factory Apparel Crate 602 Sportsman feature and started pressuring Michael Sabia for the lead as the two ran side by side for many laps. Edwards took the lead away from Sabia on the inside of turns one and two on lap 18 and led the remaining laps for his fourth victory of the season and the 13th of his career in the division.

“The track was real racy tonight, the car had a lot of speed,” Edwards said following his win. “I have to thank my car owner John Kollar for going above and beyond to give us what we need to race and be successful.”

The opening ceremonies at any event can be special, the one at the 29th edition of the Fonda 200 on Saturday 9/18/2021 was one of the best. Drivers were introduced according to their starting positions and walked to their cars in front of the fans in the grandstand.

Friesen took the lead away from Varin on the inside of turns three and four on lap 66 only to have Varin get back by for the lead on the backstretch of the next lap. The race took a turn for the worse on lap 67 for Friesen who cut down a right front tire to bring out the caution. Friesen would pit to change the tire and discovered that he also had a broken right rear shock which his crew changed, and he went back out on the track in the 24th position.

Lap 101 saw Friesen get by Matt DeLorenzo for the lead with Mike Mahaney getting by David Schilling and DeLorenzo for the second position on lap 109 with Friesen now out to a straightaway advantage. Through two more cautions Friesen pulled away on each restart to a straightaway lead each time, including lap 155 with lap traffic coming into play, but he would go on to the $53,000 victory.

“Pretty wild out there today, I could get to the 93 (Varin) but then he would get away from me,” Friesen told Chris Moore in victory lane. “Had the tire go down and a broken shock and thanks to my crew for getting things changed for me to get back out there. The best race in New York State was here at Fonda today.”

“I saw the 97 (Warner) along side of me at one point and knew that I had to get going,” Friesen continued. “On the restarts I just tried to get a good launch and get back to the top. Congratulations to Jake Spraker who was a great car owner that I got to drive for at one point in my career.”

The 2022 Southside Beverage Fonda 200 weekend begins this Thursday (Sept. 15) with the Sunoco Modified ‘Ultimate Underdog 33’ taking place. Any driver unable to pick up a Modified victory at any speedway this season will be eligible to participate.

The Montgomery County Office of the Aging Limited Sportsman join the program, now racing for a $1,100 top prize thanks to Holmes & Kugler Towing in Schenectady, N.Y. Open Practice for all other divisions participating during the weekend will also be available.

Friday night’s racing action will be followed by a post-race party with LIVE music in the Entertainment Building on the fairgrounds.

The weekend concludes on Saturday, Sept. 17. The STSS Modifieds take part in Last Chance Races to set the final starting field for the $53,000-to-win ‘Fonda 200’ headliner paying $1,000 to take the green flag.

The Swagger Factory Apparel STSS Crate 602 Sportsman join the Saturday program, battling for 25-laps in Round No. 6 of the Precision Hydraulic & Oil North Region.

Since 1953, the “Track of Champions” Fonda Speedway has hosted the best in stock car racing. Under the management of BD Motorsports Media LLC, the speedway will operate weekly on Saturday nights from April through August plus several special events. Fonda Speedway is located on the Montgomery County Fairgrounds off of New York State Thruway Exit No. 28 at 21 S. Bridge Street Fonda, NY 12068.