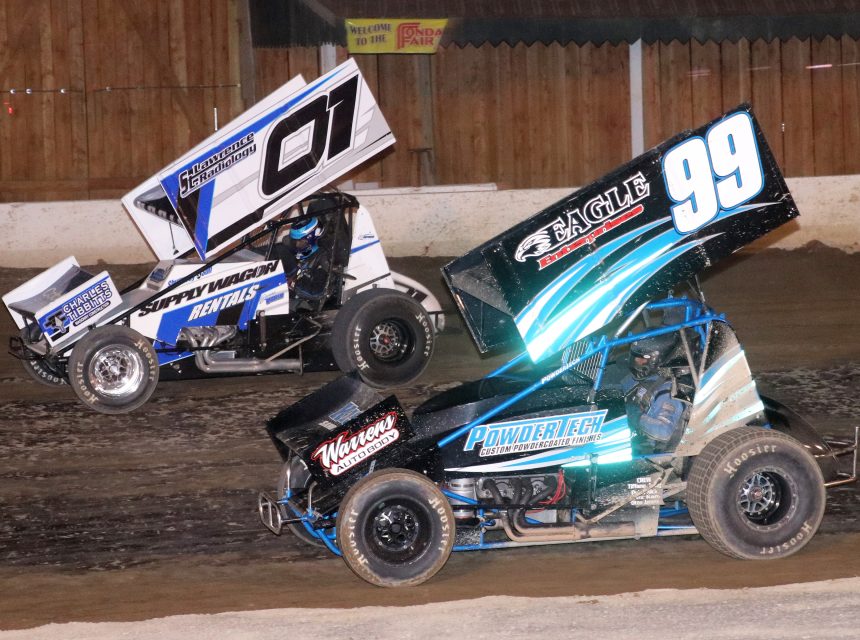 Fonda, NY – The “Track of Champions” Fonda Speedway management will welcome a new sponsor to the Montgomery County Fairgrounds track this Saturday, August 6 when Carver Companies presents the Lucas Oil Empire Super Sprints (ESS) for their second visit of the season at Fonda.

Al regular divisions will also be in action on Saturday including the Sunoco Modifieds, the Swagger Factory Apparel Crate 602 Sportsman, the Algonkin Motel Pro Stocks, the Montgomery County Office for Aging Inc. Limited Sportsman, and the Fonda Fair Four Cylinders. Gates will open at 4:00 p.m. with hot laps at 6:00 p.m. and racing at 7:00 p.m.

The Empire Super Sprint (ESS) Series made an appearance at Fonda back on 5/14/2022 for the first time since 2018, with a four wide salute to the fans starting things off before the green flag was thrown. At the start of the 25-lap event, it was Steve Glover who grabbed the lead after three tries were needed to get the first lap completed.

Jason Barney was next to lead with Chuck Hebing second on lap six while Danny Varin moved up to the seventh position after having to pit to repair the top wing on his car during one of the early caution periods and restart at the rear of the field. Paulie Colagiovanni moved into the second position on lap 13 and two laps later was the new race leader with Varin now all the way up to the second position.

Varin took the lead on lap 18 with a pass on the inside at the line to complete the lap and led the remaining laps for what was his third consecutive win in the ESS Series in 2022 at the time (Fulton, Utica Rome, Fonda). It was also the fifth consecutive win of his career in the ESS Series at Fonda in the St. Lawrence Radiology/Supply Wagon Rentals #01 car on Supply Wagon Rentals Night at the “Track of Champions” a business owned by the Varin family. Jordan Poirier, Colagiovanni, Josh Pieniazek, and Barney competed the top five in the event back on 5/14/2022.

“I pulled into the pits and said man I don’t feel that good,” Varin told ESS Series announcer Adam Buchanon in victory lane almost three months ago. “They told me well we have too much else to fix so just man it up and run it. This thing was on rails I just needed a little bit of speed and clean air and once I got that it was rolling. This fifth consecutive ESS Series win at Fonda means everything, we struggled there for a couple of years, but this was three straight for this X1 chassis I can tell you that. We put this car together with basically no sponsors, then right at the end people jumped on board to help us out.”

All total in 2022 in the ESS Series alone, Varin has four wins after winning at Evans Mills on asphalt back on 6/18/2022 coming into the event at Fonda this Saturday.

A total of 23 ESS Sprint Car events have been held at Fonda from 1987 through 2022 with 13 different drivers winning those events. Justin Barger and Danny Varin lead the way with five victories apiece while Lance Yonge and Steve Poirier both have two wins apiece. John Brutcher, Bobby Parrow, Tom Taber, Craig Lane, Doug Emery, Jessica Friesen, Jeff Cook, Chuck Hebing, and Stewart Friesen all have one win apiece. One of the wins for Varin was the prestigious Kramer Williamson Memorial event back on 8/12/2017.

Also, on Saturday the Fonda Speedway Kids Club will present backpack night featuring backpacks donated from different race teams and fans. With the school year coming up quick this will come in handy to many local families. If you would like to register your child to win one of the backpacks, please sign up with Ashley Abeling under the grandstand at gate two.

If you would like to donate a backpack, please let the Fonda Speedway Kids Club know that you are interested in doing it by going to their Facebook page. There goal is to give away 50 backpacks!