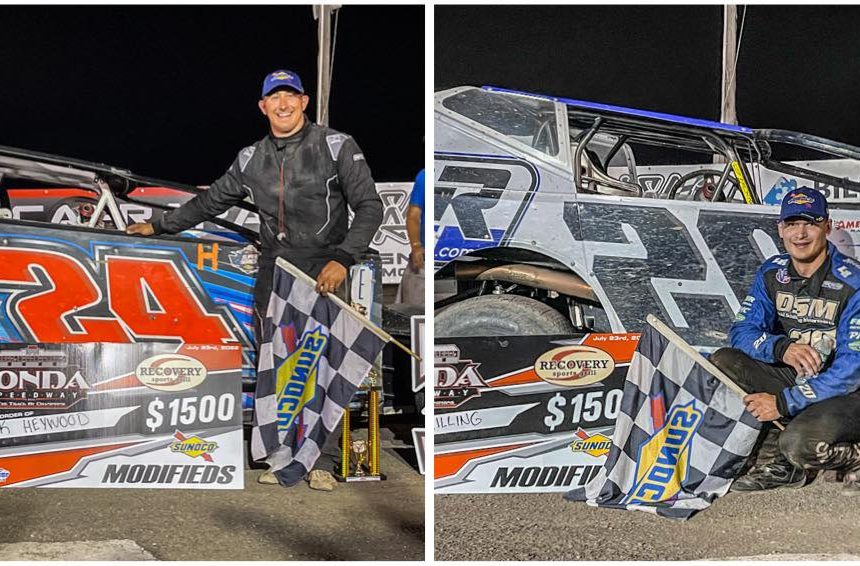 When the final checkered flag flew to complete the two feature events there were two first time winners celebrating in the F.X. Caprara Car Companies victory lane, Nick Heywood in the Moody Mile Motorsports #24H owned by the legendary Wes Moody and David Schilling in the BDR Speed #20 which had a Wegner spec motor in the car carrying him to victory lane.

“It’s been a rookie year for us that’s for sure,” Heywood told Mimi Lazzaro in victory lane. “But we’ve been persevering and pushing every week busting our butts. Wes (car owner Wes Moody) keeps saying we just gotta keep rubbing it and we’re gonna get it and tonight was our night.”

“This is amazing,” Schilling said after the second twin 20 event. “A lot of people stuck behind me when they probably shouldn’t have and I really appreciate all those people, Brett Deyo, my dad, all of the people on this car. I didn’t know if this day was ever gonna come, I ran so many races here, but we were never good enough to win. I don’t know if I would have won if it was 30-laps, but we’ll certainly take that.”

With the wins, Heywood and Schilling became the 139th and 140th different drivers to win a Modified feature event at Fonda in a total of 1413 events!

Pastor Greg Nitz said the prayer to start opening ceremonies while Abbileigh Coon of Cortland, NY sang the National Anthem. The 50/50 on a very hot night was $2092 and was won by Craig from Hunter, NY.

The starting lineup for the first twin 20 event was determined by normal handicapping procedures with Darwin Greene and Nick Heywood making up the front row, running the entire first lap side by side before Heywood cleared Greene coming out of turn four to complete the lap. Heywood was in lap traffic by lap eight with Greene, Pep Corradi, David Schilling, and Brian Gleason completing the top five at the halfway point in the event.

Greene was held up by the lap cars of Rich Christman and Brian Pessolano just after the halfway point in the event allowing Heywood to pull away while ninth place starter Rocky Warner made his way by Schilling and Corradi for the third position on lap 17. Heywood was out to a half track lead with only two laps to go and went on for the win over Warner who took the second position on the final lap, Greene, Schilling, and Gleason.

“We travel two and a half hours from Plattsburg, NY so it’s a haul,” Heywood added. “We are on the road from Friday night to Sunday mornings and we’ve been pushing for it. Wes has been trying to win here at Fonda for 60 years, so he finally got it. What a great feeling.”

“It’s been a long time,” Wes Moody said to Mimi Lazzaro in victory lane. “I’ve been here over 60 years, and this is my first feature win, I won a lot of heat races myself but to have somebody like Nick behind wheel of my car I am really proud of him and his whole family.”

The starting lineup for twin 20 number two was inverted by six placing Corradi and Gleason on the front row at the start. When Joe Kriss threw the green flag to start the event, Gleason was the race leader with an early caution out on lap two. On the restart, Schilling went by both Warner and Corradi for the second position with Danny Varin now fourth behind Warner.

Corradi brought out the caution on lap three for what was thought to be a flat tire, but the issues must have been even more serious as he fell out of the event after bringing out the caution again three laps later. On the restart, Schilling took the lead from Gleason with Warner also getting by Gleason for the second position.

Another yellow was out on lap eight for Gleason who suffered a flat right rear tire with Schilling choosing the inside for the restart. At the halfway point the top five consisted of Schilling, Warner, Varin, Ryan Odasz, and Ronnie Johnson. One final yellow flag was out on lap ten with Schilling pulling away on the restart to a comfortable lead. Schilling went on to his first career win at Fonda followed in the top five by Warner, Varin, Johnson, and Odasz.

“Casey Wegner put the spec motor in this thing, and it ran great right around the top,” Schilling said. “There was some bite leaving on the bottom right there (pointing towards turn four) so that is why I restarted each time on the inside. If you restarted on the top, you couldn’t grab anything and that’s how I got by Brian (Gleason). I was trying to stay conservative; I wasn’t very consistent, so I guess that was just nerves.”

Harry Shaffer and Griffen Mansmith started the 20-lap Swagger Factory Apparel Crate 602 Sportsman feature on the front row and ran lap one side by side until Mansmith cleared Shaffer at the line to complete the lap. Brett Mortensen started the event in the fourth position and took the second spot away from Shaffer on lap three but under a caution one lap later suffered a flat tire and headed to the hot pit. He would restart at the rear of the field.

On the restart, tenth place starter Cody Clark was the new third place car while 12th place starter Payton Talbot was right behind in fourth. Another yellow flag slowed the field on lap 11 for a four-car wreck in turn four with point leader Chad Edwards going to the hot pit at that point. He would restart at the rear of the field. Clark was the new second place car on the restart with Talbot in the third spot with Clark pressuring Mansmith for the lead on lap 16 just before he suffered a right rear flat tire to bring out yet another caution. Clark also went to the hot pit for a tire change and rejoined the rear of the field.

Talbot got by Mansmith for the lead with a slide job pass in turn two on the restart and led the remining laps through two more caution flags for his third win of the season and the fourth of his career in the division at Fonda. Edwards came all the way through the field to finish second followed by Troy palmer, Tim Dwyer, and Chip Constantino who also suffered a flat tire and had to come through the field.

“This car was awesome,” Talbot said in victory lane. “I didn’t know where Chad (Edwards) was, I knew that he went into the pits but then I heard over the Raceceiver that he was second. I knew he would be on the bottom; I tried the bottom a few times and the car just wasn’t good enough on the bottom, so I had to stick with the top. Turn one and two was pretty good, three and four I was sliding a bit, I could enter real good but then I would slide up. I was trying to keep my momentum up and it paid off.”

The Algonkin Motel Pro Stock feature started with Josh Coonradt leading from the pole position. With no laps completed, the yellow flag was out for Luke Horning who was in the wall in turn two. Horning was not injured but was done for the evening at that point. As Coonradt continued to lead, Caden Dumblewski and his father Chuck were racing for the second position, swapping the spot twice before Caden took control of the position on lap four.

“This win is great for our team and my family,” Coonradt said. “We lost our grandfather this week and this one is for him. With the field of cars, you have here you don’t know who is behind you and starting up front you don’t know what lane they are running. There are so many good, fast, competitive cars here that you just don’t know where anybody is.”

Connor Prokop took the lead on a lap 13 restart after the top two of AJ Greco and Josh Kane came together after the green flag flew on the restart. For Prokop it was his third win of the 2022 season in the 15-lap Montgomery County Office for Aging Inc. Limited Sportsman division and he was followed in the top five by Greco, Kane, Brady Cordova, and Ryan Sweet in the top five.

Next Saturday, July 30 Parks Companies will present a regular racing program in all divisions along with the CRSA Sprint Cars. Gates will open at 4:00 p.m. with hot laps at 6:00 p.m. and racing at 7:00 p.m.

1st career win in the division at Fonda for Heywood

1st career win in the division at Fonda for Schilling