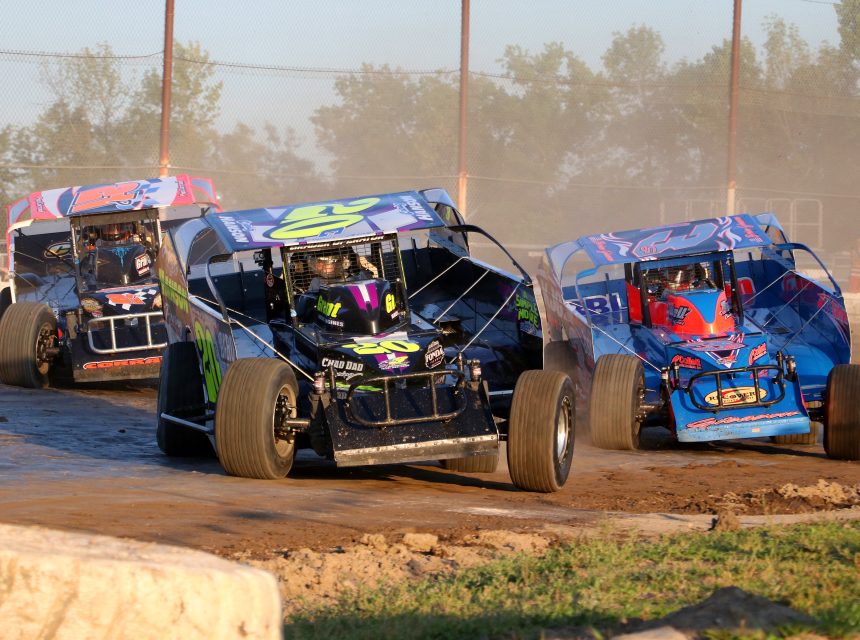 Fonda, NY – This Saturday, July 23 the Recovery Sports Grill will present Twin 20’s for the Sunoco Modifieds paying $1,500 to win each! Also, in competition on Saturday will be the Swagger Factory Apparel Crate 602 Sportsman, the Montgomery County Office for Aging Inc. Limited Sportsman, the Algonkin Motel Pro Stocks, and the Fonda Fair Four Cylinders. Gates will open at 4:00 p.m. with hot laps at 6:00 p.m. and racing at 7:00 p.m.

So far in 2022 there have been 14 events run in the Sunoco Modified division with six different drivers winning those races. Leading the way with five wins so far this season is Matt DeLorenzo followed by Stewart Friesen with four; Craig Hanson with two; Danny Varin, Dave Constantino, and Brian Gleason who all have one win apiece with Gleason’s win the first of his career in the division. DeLorenzo is the current point leader going into this week’s events.

There have also been 14 events held in the Swagger Factory Apparel Crate 602 Sportsman with current point leader and defending Track Champion Chad Edwards leading the way with six event wins. Following behind Edwards is Cody Clark with three wins; Payton Talbot with two wins; Brian Calabrese, Mark Mortensen, and Rocky Warner all with one win apiece. So far in 2022 there have been no first career winners in the division.

Current point leader Zach Dufel leads the way in the Montgomery County Office for Aging Inc. Limited Sportsman division with four victories followed by Kyle Dingman with three; Connor Prokop with two; Lance Hill, Josh Kane, Harold Robitaille, and Bob Rowback all with one win apiece. In summary there have been seven different winners in a total of 13 events.

The Algonkin Motel Pro Stock division has run a total of 13 events so far in 2022 with four different drivers winning those events. Leading the way in both feature wins and current points in Nick Stone with nine total wins followed by Beau Ballard with two victories, one being the prestigious Hondo Classic, Luke Horning and Jason Morrison with one win apiece with Morrison’s victory the first of his career in the division.

There have been no big surprises in the Fonda Fair Four Cylinder division as both Ken and Kerrie Hollenback have dominated the division again in 2022. Ken leads the SOHC class with 12 victories with the only other winner in the class being Todd Morey who scored his first career win back on July 2.

The Fonda Fair Four Cylinder DOHC class has seen a little more competition with Kerrie leading the way with nine feature wins while John Napoli has three wins and Dale VanAllen has one win which was the first of his career in the division. Ken is the current point leader in the SOHC class while Kerrie leads the way in the DOHC.

THE FONDA SPEEDWAY KID’S CLUB TO CELEBRATE “CHRISTMAS IN JULY”

The Fonda Speedway Kid’s Club will be celebrating “Christmas in July” this Saturday, July 23 so be sure to see Ashley Abeling and sign up your child for the prizes and giveaways so that they don’t miss out! There will be some special donated “stuffed” stockings thanks to the work of Debora Ward and Jann Ivancic-McGaffin! So be sure to get a jump start on Christmas and celebrate the holiday early as many people do with a special “Christmas in July”!

This will be an exciting night of baseball and a great opportunity to meet and greet some of your favorite Fonda Speedway drivers!!!!

Special THANK YOU to the Amsterdam Mohawks for their continued partnership with Fonda Speedway!!!!!! AmsterdamMohawks.com

It’s 𝗥𝗔𝗖𝗘 𝗪𝗘𝗘𝗞 at Fonda Speedway. Recovery Sports Grill presents the action at the Track of Champions THIS SATURDAY, JULY 23.