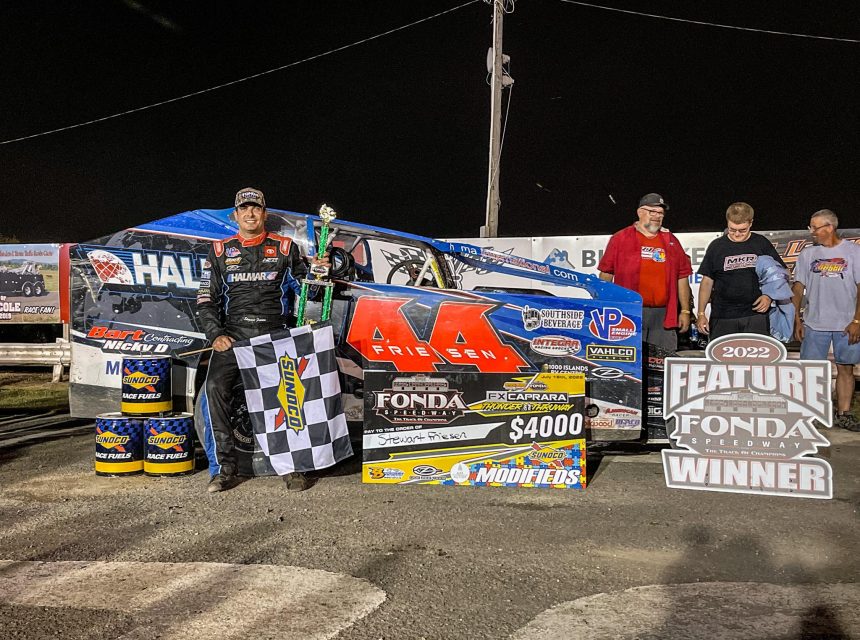 Fonda, NY – On Saturday evening at the “Track of Champions” Fonda Speedway, Stewart Friesen started the 30-lap Sunoco Modified feature in the fourth position by the luck of the draw as the event was part of the F.X. Caprara Thunder on the Thruway Series with a $4,000 pay day on the line. Shortly after lap one was completed, Friesen got up too high in turn one and scraped the wall with the right rear of his car which ended up spinning out in turn two to bring out the caution.

Friesen went to the hot pit for repairs and rejoined the race at the rear of the 27-car field, putting on a clinic to get back to the front. With the aid of a few caution flags and a switch to the bottom lane late in the event, it was no problem for Friesen to get to the front, take the lead from Rocky Warner on lap 25, and go on to his fourth win of the 2022 season and the 83rd of his career at Fonda.

“It was faster up on top, so I stepped on it there and got behind Jess (wife Jessica Friesen) in the dirty air and it took off,” Friesen told Mimi Lazzaro in victory lane. “I wiped half of the right rear clip off the car at that point and got the rest of it down in three and four coming through traffic. Great race car, great race team, I don’t know what to say. Rocky was up top and then the top was going away, and I was able to get him on the bottom.”

The racing event at Fonda on Saturday was special for another reason as well as it was presented by One Zee Tees and AIM Autism to benefit the Crossroads Center for Children. The “Tailgate for a Cause” took place from 1:00 p.m. to 4:00 p.m. with a chicken barbeque, a dunk tank, raffles, and activities for the kids and all total according to Friesen in victory lane raised close to $30,000 for the Crossroads Center, which was attended by Stewart and Jessica’s son Parker in the past.

“I didn’t grow up on dirt,” Bodine said to the crowd. “I grew up on asphalt but going to a couple of dirt races with Jess and Stewart I didn’t realize how much fun I was missing; it is very different and a lot of fun. I never raced on dirt with anything, but I would love to race a Modified.”

Next week at the Pocono Raceway, Bodine will make his 800th career start in the Camping World Truck Series as a teammate to Friesen in the Halmar #62 truck so best of luck to both drivers from the Fonda Speedway!

Pastor Greg Nitz said the prayer during opening ceremonies with Amanda Aiello of Schyler, NY doing a great job singing the National Anthem. Leeanne from Gloversville, NY was the winner of the 50/50 worth $2,871! As always great job by the 50/50 ladies and congratulations to Leeanne.

The 30-lap F.X. Caprara Thunder on the Thruway Series Sunoco Modified feature began with Rocky Warner the early race leader from his outside pole starting positions thanks to the luck of the draw. Jessica Friesen followed along in second with the caution out shortly after lap one was completed for Stewart Friesen who came in contact with the wall in between turns one and two and ended up sideways in turn two. Friesen went to the hot pit for repairs and rejoined at the rear of the 27-car field.

Warner chose the bottom on the restart and led at the drop of the green flag while Drellos took the second position away from Jessica Friesen with Stewart Friesen now up to the tenth spot. At the halfway point Warner was the race leader followed by Drellos, Jessica Friesen, Johnson, and seventh place starter Alex Yankowski.

After a caution on lap 17, Warner continued to lead running the outside of the speedway while others switched to the bottom including Stewart Friesen who was now in the top five after getting by Yankowski. One by one afterwards, Stewart Friesen made his way by Johnson and Jessica Friesen, making both of those passes on the bottom.

One final yellow flew on lap 19 and on this restart, Stewart Friesen was the new second place car after getting by Drellos. With Warner running up high, Stewart Friesen stayed low and challenged Warner for the lead in every turn but coming out of the turn Warner would use his momentum on the outside to maintain his lead.

Going into turn one with five laps to go, Stewart Friesen got alongside of Warner down low and coming out of turn two took the lead away, leading the remaining laps for the $4,000 win in the Halmar #44 Bicknell car. Warner ended up second followed by Drellos, Jessica Friesen, and Johnson.

“On a couple of those restarts guys were getting bottled up and going where I wanted to go,” Stewart Friesen said in victory lane. “I also got jammed up, so I went to the bottom, and I was able to pick off some cars. We adjusted the car before the feature and tightened it up a little more than I thought that we needed to.”

The F.X. Caprara Car Companies Thunder on the Thruway Series Swagger Factory Apparel Crate 602 Sportsman feature began with Brett Mortensen leading at the drop of the green flag after starting third with the first of many caution flags in the event out with no laps completed for pole position starter Troy Palmer who pitted and rejoined the field at the rear.

Mortensen led on the original restart with 25th place starter Cody Clark in the tenth position when lap five was completed. Tony Farone brought out an unnecessary caution on lap six when he came to a stop in turn three at the pit entrance, then after the caution was thrown, he drove to the hot pit. He would continue on at the rear of the field.

On the restart, Mortensen dropped back to third after Tanner Warner made a slide job pass for the lead coming out of turn two with fourth place starter Chad Edwards also getting by Mortensen for the second position. After Farone brought out another caution flag on lap ten, Edwards was the new race leader on the restart with 11th place starter Payton Talbot now in the fourth position after getting by Mortensen.

At the halfway point in the event the top five consisted of Edwards, Warner, Talbot, Mortensen, and 17th place starter Chip Constantino. When the caution came out on lap 18 for Palmer who had his front-end collapse in turn four, it took away the straightaway advantage that Edwards had built up.

On the restart a multi car pileup ensued in turn one after Talbot and Mortensen came together on the front stretch just before the flag stand, with Mortensen ending up sideways collecting four other cars in the process. All drivers were okay, but Mortensen’s night came to an unfortunate end at that point while Talbot was able to continue on in the third position after the “racing” incident.

Edwards led the remaining laps for his sixth victory of the season in the John Kollar owned #10% Bicknell car followed in the top five by Talbot, Warner, Clark, and Constantino.

“Like usual I draw like crap for the heat races but still made our way into the draw for the feature then drew good for that,” Edwards said. “The track was real racy for us going before off the Modifieds, so I was able to get to the front, the last few weeks the track has been great for the most part.”

The F.X. Caprara Thunder on the Thruway Series Algonkin Pro Stock feature was caution free with Chuck Dumblewski leading at the drop of Joe Kriss’ green flag from the pole followed by outside front row starter Beau Ballard. At the finish line to complete lap three, Ballard nosed past Dumblewski for the lead and from that point on the race was for the second position to the checkered flag.

Fifth place starter Ivan Josin went around the outside of both Kenny Gates and Jason Morrison for the third position on lap six with ninth place starter Nick Stone also getting by the pair of drivers for the fourth spot. Ballard raced out to a straightaway lead at the halfway point with the top five at the time consisting of Dumblewski, Joskin, Stone, and eighth place starter Luke Horning.

Kenny Gates fell back out of the top five but after the halfway point he found the inside groove to his liking and got back into the top five at the checkered flag after getting by Joslin late in the event. Ballard went on to his second consecutive win of the season and the third of his career at Fonda followed in the top five by Dumblewski, Stone, Gates, and Joslin. Beau Ballard’s family was very excited in victory lane, greeting Ballard with cheers and hugs in victory lane.

“This poor kid right here (Parker) has been saying that he thinks that he is bad luck, Ballard said in victory lane. “He hasn’t been to victory lane with me since a tour race at Five Mile Point with my IMCA car when he was three years old. So, you don’t know how much this win means to me to have my two kids Parker and Weston with me here in victory lane. I was a little nervous how it was going to go with the rule change, but I’ve got no problem with it, we’re rolling.”

Zach Dufel took the lead on a lap nine restart and went on to win the 15-lap Montgomery County Office for Aging Inc. Limited Sportsman feature for his fourth win of the season and the fourth time in his career in the division over eighth place starter Kyle Dingman, 10th place starter Connor Prokop, third place starter John Anderson, and seventh place starter Ryan Sweet.

The Hollenback brothers Ken and Kerrie continued their dominance of the Fonda Fair Four Cylinder division winning their 12th and ninth features respectively with Kenny the overall winner (SOHC) and Kerrie finishing second overall for the win in the DOHC category. John Napoli, Dale VanAllen, and TJ Marlitt completing the top five overall.

Next Saturday, July 23 the Recovery Sports Grill will present “Fan Favorite” Modified Twin 20’s paying $1,500 to win each along with all other regular divisions in action and no increase in the admission price! Gates will open at 4:00 p.m. with hot laps at 6:00 p.m. and racing at 7:00 p.m.