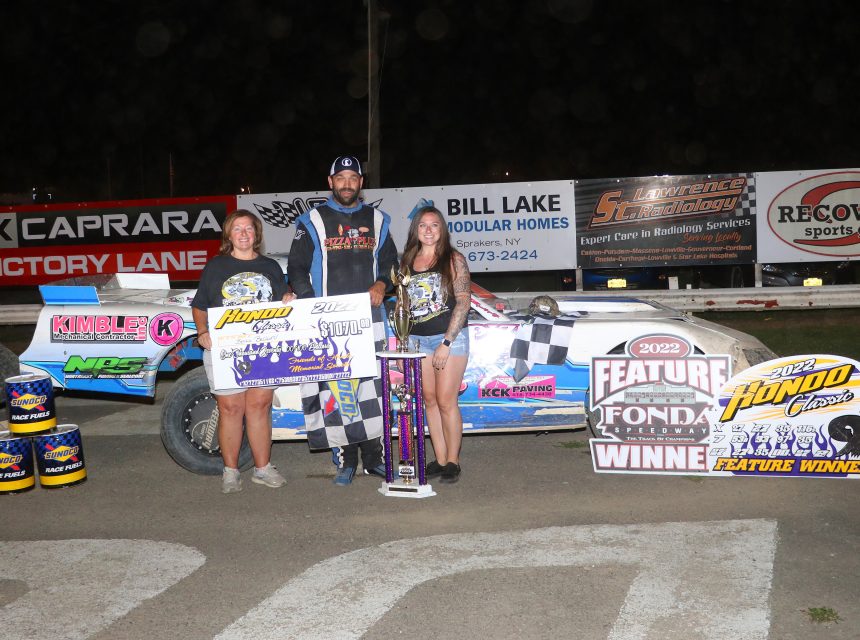 Fonda, NY – On Saturday evening at the “Track of Champions” Fonda Speedway, the 29-lap Algonkin Motel Pro Stock feature was the 17th edition of the Hondo Classic in memory of the late Hondo Carpenter featuring a total purse of $3,669.97 in bonuses and lap sponsorships on top of the regular track purse! A complete list of bonuses and lap sponsorships are listed at the end of this release.

At the end of the extra distance 29-lap event, Beau Ballard was the winner of the Hondo Classic in the Kenn VanWert owned, #15 Nick Stone built “Manimal” Chassis. For Ballard it was his first win of the 2022 season, his first in the “Hondo Classic” and the second of his career at Fonda.

“We were real close Covid year and ran second to Nick (Stone) and last year we were alright, but it means a lot winning this race,” Ballard said in victory lane. “Kelley and Kaitlyn (Keefe) put a ton of work into it, there are tons of sponsors, and I grew up watching Hondo race here at Fonda. This one is really special; it means a lot to me.”

The 2022 version of the event started with Luke Horning carrying a flag in his race car around the track which said “#9 HLC In Loving Memory” followed by a four wide salute to the fans while “Thunderstruck” played over the loudspeaker. Fonda Speedway announcer Chris Moore yelled Hondooooooooooooooooooooooooooo as the green flag was thrown with Jason Morison leading the first lap of the event.

The top three of Morrison, Beau Ballard, and Chuck Dumblewski were three wide coming out of turn four to complete lap one with Morrison holding on to the lead at that point until lap two when Ballard took over the lead. Nick Stone started the event in the 11th position and by lap six he was running in the top five.

The first yellow flag of the event flew on lap eight and on the restart, Stone got by two cars into the second position with Ballard maintaining his lead. Seventh place starter Luke Horning was also making his way to the front after the restart, getting by Morrison for the fourth position just before the red flag came out on lap nine for Randy Cosselman who got into the front stretch wall collecting three other cars in the wreck. Fortunately, nobody was injured in the wreck with Ballard choosing the outside groove for the restart which is where he had been running the entire race up to that point.

Horning was the new third place car on the restart behind the top two of Ballard and Stone. With Ballard running the outside it left no choice for Stone but to run the inside and lap after lap Stone tried to find the grip on the bottom to get by Ballard to no avail. At the halfway point in the event the top five consisted of Ballard, Stone, Horning, Dumblewski, and Ivan Joslin.

On lap 20, Stone brought out the caution when a wheel broke on his car while he was running in the second position. He went to the hot pit for a new tire and restarted at the rear of the field. Ballard again chose the outside for the restart and held on to it at that point before one final yellow slowed the field on lap 22 for Jim Normoyle who suffered a flat tire.

Ballard held on to the lead into turn one but in turn two Horning made a slide job pass for the lead. The lead was short lived however as Ballard crossed over and retook the lead on the inside of the backstretch. Ballard pulled away with three laps to go while Horning lost a bunch of positions after getting out of the groove in turn four and settling back in, in the seventh spot.

“I kind of anticipated the slide job was coming from Luke after the restart before,” Ballard said. I knew that he was gonna drive it in hard, so I just kept my momentum up and I’m gonna lie to you I wasn’t gonna give him any room going into turn three because after leading that many laps I wasn’t about to let it go.”

Ballard crossed under Joe Kriss’ checkered flag first followed in the top five by sixth place starter Josh Coonradt, Stone who came all the way from the rear of the field in nine laps for the third spot, Dumblewski, and Morrison.

“I was getting sick of all the yellows I can tell you that,” Ballard told Mimi Lazzaro in victory lane. “But I knew that we had a good hot rod, and we were able to hold off both Nick early on and Luke as well.”

We’ve struggled all year here at Fonda definitely for the worse, so we’re happy with second,” second place finisher Josh Coonradt said as the top three joined Ballard in victory lane. “Beau is a great guy, and the win couldn’t have gone to a better person tonight.”

“I hit the wall during my heat race and cracked the wheel which came apart during the feature,” Stone said after his third-place finish. “I should have found it, but I overlooked it. Stuff like that happens and after that I just tried to focus more and picking off all of the cars that I could. It’s nice to see the “Manimal” cars here in victory lane in the top three.”

“We always said that we would keep doing this as long as the fans, drivers, and everyone was interested in doing it,” event organizer Kelley Keefe (along with her daughter Kaitlyn said of the Hondo Classic. “We never have a problem getting sponsors and we have more drivers all the time, so we are grateful that they are interested in the event and that they want to keep Hondo’s memory alive with us. It is fun and we are glad to be able to do it, Fonda is great to us and lets us do basically whatever we want.”

In addition to the Hondo Classic the 1st Annual Bobco Memorial Dash for Cash in memory of the late, long time Fonda Speedway videographer Bob James who passed away on September 20, 2020, was held. Organized by Bob’s longtime friend Mark Krosky, the top two finishers in each of the Algonkin Motel Pro Stock heat races were eligible to participate in the five-lap dash event.

Bob’s mother and sisters were there for the presentations in victory lane for the event which paid $509 for first place followed by $409 for second, $369 for third, $329 for fourth, $289 for fifth, and $269 for sixth based on a six-car field. Bob James was a long-time car owner for Hondo Carpenter so what better night to have a Dash for Cash in his honor than during Hondo Classic Night!

Nick Stone was the winner of the Bobco Memorial Dash for Cash followed by Chuck Dumblewski, Jason Morrison, Bill Knapp, Andy Graves, and Luke Horning. A special trophy was presented to Stone with an old-time video camera on top of it, what a fitting tribute to a man who lived and breathed videoing stock car races at different tracks.

“I met Bob when we first started racing,” Stone said after the event win. “I remember we used to call him to try and get the videos as fast as we could after Saturday nights race, so whenever they were ready, we would go to his house and get them. Things are a lot different now with TV and cell phones and I kind of miss those days.”

“Bob and Hondo were two of the guys I first met when we started racing through Kenny Martin and those are the people that brought me around and into this,” Stone continued to say. “It is great to have this dash in memory of Bobco, we always look forward to the Hondo Classic and this is a great little bonus added on to it to remember Bob and Hondo both on the same night.”

“Starting on the pole is sometimes tough,” second place dash finisher Chuck Dumblewski said afterwards. “I wanted to go to the top but sometimes you don’t know if someone else is up there and by the time I got up there it was too late. Bob was always the first to come up and see me to buy a video, and he told me how I did on the video. That was always fun, and I do miss that. He wasn’t only videoing, he was paying attention to what was going on, it was always nice to talk to him.”

“I’ve only been in these car (pro stocks) for eight years,” Morrison said after his third-place finish. “I have participated in every one of these Hondo Classic events and I’m gonna keep doing it.”

1st win of 2022, 1st Hondo Classic win, and the 2nd win of his career in the division at Fonda for Ballard

The family of Bob James (BOBCO) would like to thank the racing community for their support of the dash and remembering Bobby with this special memorial dash. Special thanks goes out to: Krash Menders, Holly Krosky, NESCOT, Rich Carpinello, Kelley and Kaitlyn Keefe, Mel Thomas, Bob and Tina Gamache, Don Kruger, Racin’ Tom Czaban, Joe and Ivy Williams, All in Printing and Designs, Bob Hackel Used Cars, Krazy Kenny Martin, Don and Diane Champion in memory of Craig, Kugler’s Red Barn, along with Bob’s Mom and Sisters who also donated to the dash.