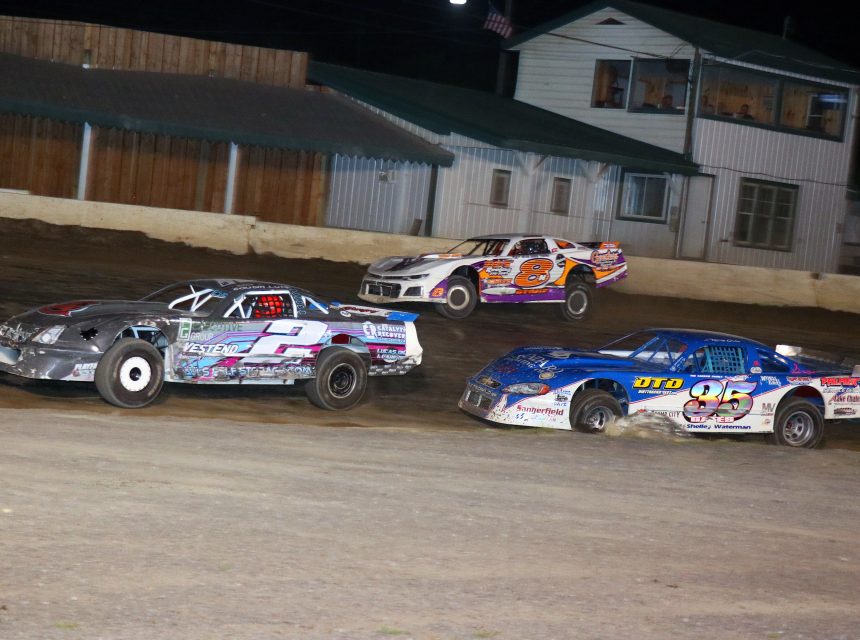 Fonda, NY – On Saturday, July 9 at the “Track of Champions” Fonda Speedway, Sampson Motorcar presents “Fan Appreciation Night” with a $5 grandstand admission price! All regular divisions will be in action including the Sunoco Modifieds, the Swagger factory Apparel Crate 602 Sportsman, the Algonkin Motel Pro Stocks, the Montgomery County Office of the Aging Limited Sportsman, and the Fonda Fair Four Cylinders.

Thanks to a partnership with the Village of Fonda, there will also be a Massive Fireworks Display between 10:00 p.m. and 10:30 p.m.!

There will be three special events on Saturday that will either be a part of the racing program or will be held in addition to the regular racing program. The 20-lap Algonkin Motel Pro Stock feature will be the 17th edition of the Hondo Classic in memory of the late Hondo Carpenter featuring a total purse of $3,669.97 in bonuses and lap sponsorships (amount as of the time of the writing of this press release) on top of the regular track purse!

In addition to that the 1st Annual Bobco Memorial Dash for Cash in memory of the late, long time Fonda Speedway videographer Bob James who passed away on September 20, 2020, will be held. Organized by Bob’s longtime friend Mark Krosky, the top two finishers in each of the Algonkin Motel Pro Stock heat races will be eligible to participate in the five-lap dash event.

Bob’s mother and sisters will be there for the presentations in victory lane for the event which at the time of the writing of this press release will pay $509 for first place followed by $409 for second, $369 for third, $329 for fourth, $289 for fifth, and $269 for sixth based on a six-car field.

Bob James was a long-time car owner for Hondo Carpenter so what better night to have a Dash for Cash in his honor than during Hondo Classic Night!

Also on the racing card will be the 1st Annual Swagger Factory Apparel Black Flag Challenge, which only drivers with perfect attendance during the 2022 season will be eligible to participate in.

The total payout for the event at the time of this release was $2,350 along with $800 in bonus money, $750 in gift certificates, and a $999 Swagger Factory Apparel Custom Drivers Suit for a current total of $4,899 as of the time that this press release was written.

A complete list of contributors to all three special events listed above will be available at the speedway on Saturday to be read by the announcer or you can keep track of it all on Facebook.

At the Northeast Motorsports Expo back in 2017, Bobco Video owner Bob James was given an award for his 25 years of videoing racing events at the “Track of Champions” Fonda Speedway.

The award was given to Bob by Fonda Speedway promoter Pete Demitraszek and the plaque on the front of the award trophy said: “In recognition and appreciation for your twenty-five years of dedication and diligence videotaping the racing action at Fonda Speedway, March 18, 2017.”

James started going to the races with his parents when his mother was pregnant with him, and when he was old enough to remember who the drivers were, his favorites were Harry Peek and Jack Johnson. However, it was one other driver who gave him his first kiddie ride that he will never forget, that was Lou Lazzaro.

James started videoing racing events at Fonda back in 1986 when he got his first video camera. At that time, he would either go on the infield or in turn four to do his videotaping. At the midpoint of the 1992 season at Fonda, the videographer at Fonda left, and James was asked to take over at that time.

James started owning a race car when he and his cousin Hondo Carpenter got into the sport back in 1996 as partners. Their first car was purchased in 1996 which Hondo raced in the street stock division at Albany Saratoga for one year in 1997. Chris Fain built them their next street stock which Hondo ran at Fonda and Albany Saratoga for two or three years before moving up to pro stocks and running only at Fonda.

Hondo’s statistics at Fonda included five wins in the street stock division to go along with four wins in the pro stock class. But perhaps what had even more meaning for Hondo was his popularity with the kid’s and the fans, always ready to take a photo with anyone or autograph anything that a fan desired.

Plus, a complete show of: