FRIESEN WINS $10,000 FOR HIS FOURTH CONSECUTIVE “FIRECRACKER 50” WIN AT FONDA 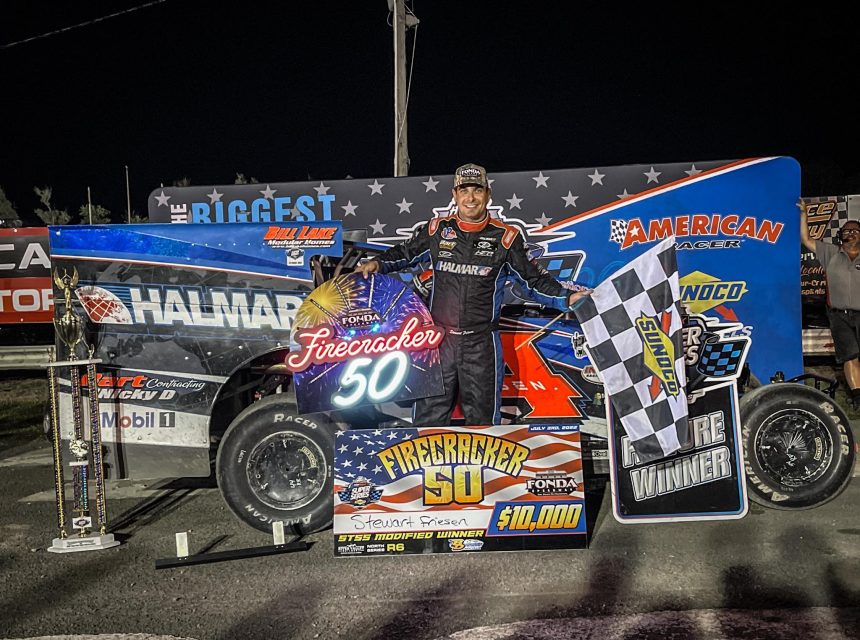 Fonda, NY – In racing and other sports there is something known as a homefield advantage. Sunday evening at the “Track of Champions” Fonda Speedway, Stewart Friesen took advantage of being home winning $10,000 for his fourth consecutive victory in the “Firecracker 50” event.

The special event held at Fonda on Sunday to celebrate the Fourth of July Independence holiday was part of the Bob Hilbert Sportswear Short Track Super Series (STSS) Fueled by Sunoco, was the fourth edition of the “Firecracker 50” event and also round six of the River Valley Builders Modified North Region for the STSS series.

“It is so great to be back here at Fonda,” Friesen told STSS announcer Jeff Ahlum in victory lane. Thanks to Halmar, all our guys, it’s been a tough season. The playing field, the competition is really high right now so whenever we get a big win it’s awesome. To be here at home on the Fourth of July weekend and to get another one here at Fonda it feels real good.”

The STSS Crate 602 Sportsman division was also in action in a 30-lap $2,000 to win event which was won by Rocky Warner in a pickup ride in the Brian Calabrese owned #21C. “Brian asked me numerous times to drive this car, but I just don’t have much interest in running crates especially after running modifieds and being successful. I had a lot of fun there but for his sponsors I wanted to help him out and we got the job done.”

Another fantastic job was done by the 50/50 ladies with a total of $4,209 going to Caitlyn from Chatham, NY. great job as always ladies!

A draw for starting positions placed Mat Williamson and Danny Creeden on the front row for the 50-lap event with Willaimson taking the early lead at the drop of Joe Kriss’ green flag who was celebrating his birthday on Sunday. Fifth and seventh place starters Demetrious Drellos and Stewart Friesen were getting to the front early taking the third and fifth positions respectively by the time the first caution of the event flew on lap four.

Drellos and Friesen took the second and third positions away on the restart and by lap seven Friesen got by Drellos for the second position with Williamson out to a half straightaway advantage. After a slide job in turn two to block Friesen and protect his lead, Williamson and Friesen were side by side for the lead coming to the line to complete lap 13 with Friesen now the leader after beating Willaimson to the line by a nose.

“We had a good draw for the heat race which helped us get to a redraw spot, started seventh and had a little bit of work to do,” Friesen said. “Luckily we were able to make some moves and get to the front before I kind of locked down on the bottom.”

By lap 19 Friesen was out to a straightaway advantage with the focus now turning to Matt Sheppard who started the event in the 10th position but was in the top five on lap 19 after getting by both Creeden and Rocky Warner for the spot. Sheppard took over the third position from Drellos two laps later while Friesen was now out to a half-track advantage.

At the halfway point the top five consisted of Friesen, Willaimson, Sheppard, Drellos, and Creeden with the caution out at that point for Keith Flach who slowed in turn four right in front of the leader in an anxious moment for Friesen. It took two tries to get the race restarted after Kyle Coffey spun on the backstretch on the first restart, but Friesen maintained his lead after choosing the inside for the restart as tire wear started coming into play.

Drellos slipped up high in turn one on the restart, falling back to the tenth position while Sheppard moved past Williamson for the second position. Friesen and Sheppard pulled away to make it their own race from that point on with Sheppard actually turning ¼ sec. faster lap times than Friesen at the lap 31 point in the event.

Sheppard closed in on Friesen who was having trouble getting by lap cars as the outside went away and he couldn’t find away around as they were running low on the track. Yellow flags affected the reminder of the event with three cautions from that point on never letting any of the drivers get back into a rhythm.

Sheppard had one final shot at the leader but slipped up high in turn two on the final lap allowing Friesen to get away for the win. For Friesen it was his third win of the season, the 82nd of his career at Fonda, and the 14th win in events 50 laps or longer at the “Track of Champions”. Sheppard ended up second with Williamson, Creeden, and Warner completing the top five.

“The cautions were definitely timely for us, it let us keep some clean air and keep Sheppard at bay,” Friesen said in F.X. Caprara victory lane. I was just trying to pace myself and not use up my tires or go as hard as I needed to. I figured he (Sheppard) could cook it and be right there, but the bottom was just so dominant, so it worked out and I was thankful for the cautions that we got. We’re gonna celebrate this one, it feels real good.”

“We had a real good car tonight, but we really didn’t catch any breaks with the redraw,” Sheppard told Jeff Ahlum in victory lane. “When we got up there it took me about five laps to get going after a caution, it seemed like every time I started running Stewy down a little bit we would get another yellow and get stretched back out but in all it was another real solid run for our team. A shoutout to Scotty Allen who lost a good friend this week, so we are thinking about you.”

“Not a bad run after the week that we had,” Williamson said after his third-place finish. “We’re getting there, getting better every time we come here so hopefully it’s a good adjustment for the $53,000 Fonda 200 at the end of the season. This is like Stew’s personal bank account here at Fonda so it’s tough to keep up with him and Matt (Sheppard) is good anywhere he goes so to be up here on the podium with them I’m happy about it.”

After two tries to start the event, Brett Mortensen led at the start of the 30-lap $2,000 to win STSS Crate 602 Sportsman feature which was round four in the Precision Hydraulic & Oil Crate 602 Sportsman North Region with Greg Havlichek in tow. On a restart on lap two, Troy Zilles who started third and Payton Talbot and Rocky Warner who started seventh were the new second and third place cars by lap ten with Mortensen in lap traffic two laps later.

With five laps to go Mortensen slowed on the front stretch with a flat tire and one by one after that, drivers started to have tire issues putting them out of the hunt for the win. Chad Edwards brought out an unnecessary caution with two laps to go when he came to a stop in turn three to bring the caution out then drove into the pit area done for the evening.

Warner hung on to the lead for the remaining two laps on the way to his 26th career win in the division over Zilles, Talbot, sixth place starter Tanner Warner, and ninth place starter Mark Mortensen who took over the fifth position on the final lap.

“I told Brian (Car owner Brian Calabrese) that I had to focus on my modified but then told me that he would take care of everything and all I would have to do is to drive the car,” Warner said of his pickup ride in the #21C. “I also told Brian that it’s a lose, lose situation for me because if I win, I’m a bully and if I lose, they will pick on me about it but we’re here and we took home the check.”

“Finishing second to Rocky is like a win for me,” Zilles told Mimi Lazzaro after the race. “He helps me out a lot and I appreciate it.”

“We got hung out on the top for quite awhile there, we didn’t get back down I think until around lap six,” Talbot said after his third-place finish. “But the car was real good, we got by a few people so I’m glad that we could come out of here with a third-place finish. Consistency definitely helps, it helps win championships, and that is my goal this year.”

Racing action continues at the Fonda Speedway on Saturday, July 9 with Sampson Motorcar Fan Appreciation Night featuring $5 grandstand admission with all regular divisions in action. The Crate 602 Sportsman will also be competing in the Swagger Factory Apparel 602 Black Fag Challenge while the Pro Stocks will be competing in the Hondo Classic event. Gates will open on Saturday evening July 9 at 4:00 p.m. with hot laps at 6:00 p.m. and racing at 7:00 p.m.