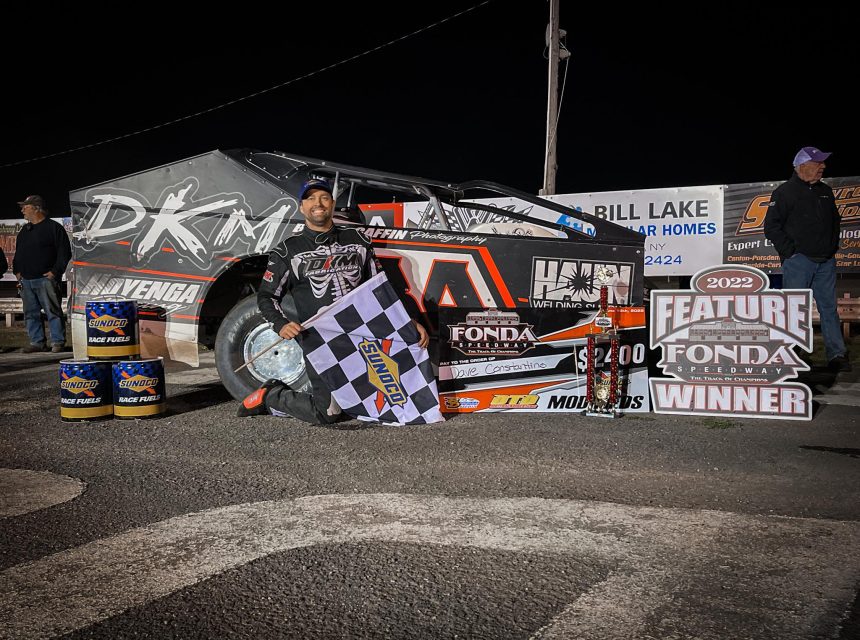 “It feels like about ten years,” Constantino said in F.X. Caprara Victory Lane about the time since his last win at Fonda which was on 5/4/2019. “I needed this real bad. I’m getting too fat to do roof dances, but I have to thank Laudy (car owner Laudy Hoyenga) for hanging with us, we tried some stuff and really struggled here last year but we have our shit together now.”

Pastor Greg Nitz said the prayer to start the opening ceremonies and Mimi Lazzaro performed the National Anthem to start the nights racing program. Mike from Broadalbin was the winner of the $2,538 50/50 after all the hard work was done by the 50/50 girls Julie Compani, Heather Marr, Rose McLoughlin, and Miss STSS Emilee Mills who was also on hand on Saturday evening!

The 30-lap Sunoco Modified feature began with Dave Constantino leading at the drop of Joe Kriss’ green flag with Chris Curtis in tow. By lap eight, Constantino held a straightaway advantage and was in lap traffic with sixth place starter Rocky Warner getting by Curtis for the second spot one lap later.

Just as Warner would close in on Constantino in lap traffic, Constantino would stretch out his lead all over again after he cleared the lap cars, in a back-and-forth kind of battle. At the halfway point the top five consisted of Constantino, Warner, Curtis, ninth place starter Demetrious Drellos, and tenth place starter Ronnie Johnson.

Brian Gleason brought out an unnecessary caution with eight laps to go in the event when he came to a stop in turn three. Once the caution was thrown, he drove to the hot pit area and then rejoined the field. Constantino chose the outside for the restart and cleared Warner coming out of turn two and again stretched out his advantage.

“I didn’t know if the car was gonna stick on the restart with Rocky,” Constantino said. “I never lifted, and it went.”

As Constantino stretched out his lead in the closing laps on his way to the victory, the race was for the third position between Curtis and Drellos who swapped the spot numerous times over the final laps. Constantino went on to the win in the DKM Fabrication #34 followed in the top five by Warner, Drellos, Curtis, and Johnson.

“I need to thank Chris Curtis for the shock change tonight,” Constantino added. “Thanks also to Laudy (car owner Laudy Hoyenga) and my crew, I couldn’t do this without them. Also, thanks to Swagger Factory Apparel for designing my new race suit. Sometimes you ask for something crazy and it doesn’t work out, but they did a great job on this suit.”

Clayton DuMond led from his outside pole starting position at the start of the 25-lap Swagger Factory Apparel Crate 602 Sportsman feature. Shortly after lap one was completed, the red flag was out for a multi car wreck in turn two involving Mark Mortensen, Jeremy Tyrrell, Joe Williams, Cody Clark, and Chip Constantino, three of those drivers who were in the top five in points at the beginning of the night.

Williams, Clark, and Constantino had nowhere to go and tried their best to avoid the wreck but still suffered damage to all of their cars. Fortunately, all drivers were okay after the wreck.

DuMond held the lead on the restart and was out to a straightaway lead on lap nine with 12th place starter Chad Edwards up to the fifth position on lap ten and three laps later he was the new second place car after getting by Griffen Mansmith. With under ten laps to go, Edwards closed in on DuMond, getting by DuMond for the lead on lap 18 in turn four.

One final caution came out with five laps to go for Mansmith who slowed on the front stretch while running fifth and for Stephen Gray who was in the back stretch wall. Edwards held the lead on the single file restart with 22nd place starter Payton Talbot in the third position with one lap to go. Edwards went on to his fourth win of the season and the 17th of his career in the division in the John Kollar owned #10% followed by DuMond, Talbot, Troy Zilles, and Troy Palmer.

“Last week we finished seventh, our worst finish of the season but still not too bad,” Edwards told Mimi Lazzaro in F.X. Caprara Victory Lane. “I hit the yuke tire in turn four last week, got a flat tire, and just kind of rode it out. It has been a tough week, I really wanted to win tonight after the unexpected loss of our good friend Kenny Tyler, so we were able to get it done for him and his family.”

The 20-lap Algonkin Motel feature began with Chuck Dumblewski the early leader from his outside pole position start with Jason Morrison second. Dumblewski and Morrison remained side by side at times for the first two laps with fifth place starter Luke Horning making it a three-car race for the lead on lap four with Morrison on the inside, Horning in the middle, and Dumblewski on the outside.

Horning was the new race leader on lap four after the move down the middle of both Morrison and Dumblewski in turn four with the top five at the halfway point consisting of Horning, sixth place starter Kenny Gates, Morrison, Dumblewski, and 11th place starter Nick Stone. In the closing laps Horning was running the outside while Gates was in his familiar spot down low. With three laps to go, Stone was up to the top two making it a three-car race for the lead and the win.

The final caution came out on the final lap for AJ Walters and John Holmes who were stopped after a spin in turn four. On the restart, Horning stayed on the outside while Stone was in the middle and Gates down low coming out of turn four to the checkered flag. Horning was the winner by 0.172 seconds at the line for his first victory of the season and the 26th of his career in the division over Stone, Gates, Morrison, and seventh place starter Beau Ballard.

“When I heard him say 8N in second, I wasn’t sure if that was the way it was gonna end, I might wreck this thing again,” Horning said. “I knew that I was gonna leave early on the restart, even before Joe (starter Joe Kriss) scolded me but I took a chance hoping that Nick (Stone) would leave with me and maybe they would let it go.”

“To have Nick run me clean on that last restart was more than I expected so thanks to him for that,” Horning continued to say. “I don’t agree with everything that Nick is doing but he has done a lot for the Pro Stock class, but I think that it is heading in the wrong direction and don’t agree on the path that we are going in. To break his streak means a lot to me and my crew, we tore this thing up many times this year, but here we are in victory lane again.”

Mark Lighthall led the first four laps of the 15-lap Montgomery County Office for Aging Inc. Limited Sportsman feature event before tenth place starter Kyle Dingman took over the lead on a lap five restart. Dingman went on to his third win of the 2022 season and the fifth of his career over Lighthall, Gus Kamburelis Timmy Wilmot, and Josh Kane.

Ken Hollenbeck started the Fonda Fair Four Cylinder feature event in the eighth position, but it didn’t matter as he was the leader at the completion of lap one and led the remaining laps for his ninth win of the 2022 season and the 77th of his career in the division over Kerrie Hollenbeck, John Napoli, Todd Morey, and Len St. Andrews.

Demetrious Drellos won the seventh annual Bill Ag Memorial Elimination Dash Race over Craig Hanson, Rocky Warner, Ronnie Johnson, Bobby Varin, and Matt DeLorenzo. The match races were two lap events for the top five in points as of 6/11/2022 and because of a tie for the fifth position in points there was no wildcard pick.

“It feels great to be back here in victory lane at Fonda,” Drellos said in victory lane. “Hopefully, we can get another one later on in the regular feature, but it was cool to win $1,000 it was a fun race.”

After being pushed to victory lane for the ceremonies for the Bill Ag event, Drellos said “I gotta figure out what’s wrong with the car, I think I broke the driveshaft, but I rather it happened now than during the regular feature.”

Next Saturday June 25, A-Verdi Storage Containers Night will feature the Patriot Sprint Tour (PST) 360- Sprint Cars along with all other regular divisions in action at the “Track of Champions”.