DELORENZO RIDES THE WAVE TO HIS 40TH CAREER WIN AT FONDA 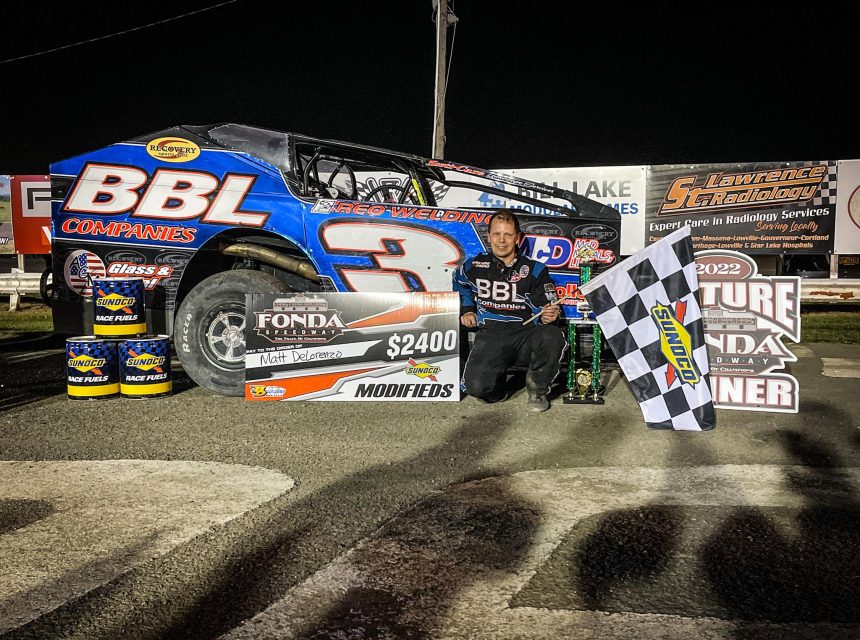 Fonda, NY – After winning at the Albany Saratoga Speedway on Friday evening, Matt DeLorenzo, his brother Mike, and his teammate Brian Gleason worked all day on Saturday to get the car ready to race at the “Track of Champions” Fonda Speedway. Proof that hard work pays off was when DeLorenzo ended up in victory lane for the third time in 2022 and the 40th time in his career at Fonda.

“My brother Mike works endless on this car,” DeLorenzo said in F.X. Caprara Victory Lane. “It’s just him my teammate Brian (Gleason) and myself working on two cars. We worked on it all day today, we’ve been doing it every week all season long. I’m beat, I’m tired, but this was a lot of fun. Thanks to all of the fans, it was great to put on a show for them, and hopefully we can keep on riding this wave.”

Congratulations to Chris from Fonda who was the winner of the 50/50 worth $2,658! Great job by the 50/50 ladies who continue to build the point fund for all of the drivers!

The 30-lap Sunoco Modified feature began with JaMike Sowle and Rocky Warner on the front row with Warner taking the early lead followed by third place starter Dave Constantino. DeLorenzo started the event in the ninth position and by the completion of lap one he was running in the top five.

Fifth place starter Ronnie Johnson and DeLorenzo both got by Constantino for the second and third positions on lap seven with Johnson on Warner’s rear bumper for the lead on lap nine. Warner was in lap traffic on lap eleven with Johnson taking the race lead on the inside of the backstretch just as a lap car crossed the track to go to the pit area in a very close call for the leaders.

With less than ten laps remaining, Johnson held a straightaway advantage with DeLorenzo now the second-place car after getting by Warner for the position on lap 19. Eighth place starter Jessica Friesen moved into the top five just before Steve Akers slowed on the front stretch to bring out the final caution of the event with three laps to go.

Johnson chose the bottom for the double file restart and held the lead through turn one until DeLorenzo got a great run on the outside of turn two to take the lead. DeLorenzo led the remaining laps for his third win of the 2022 season and the 40th of his career in the division in the BBL Companies #3D Bicknell followed in the top five by Johnson, Constantino, Friesen, and Warner.

“I’m really speechless right now,” DeLorenzo told Mimi Lazzaro in victory lane as a banner stating Matty D 40 career win was being held up. “In the heat race I wasn’t very good and almost flipped this car over. I know that Ronnie has a good small block, so I just sailed it into turn one on the restart.”

“I didn’t know whether he was gonna slide me or not, so I just didn’t let off,” DeLorenzo continued saying about the pass for the lead. “I was catching him (Johnson) a little bit and then I would mess up, I was a little pushy going into turn four and then he would pull away. I don’t know if I would have caught him without that caution. It was a heck of a race with Ronnie, he is a class act.”

The 25-lap Swagger Factory Apparel feature took two tries to get going with Harry Shaffer taking the early lead from his pole position start. Outside pole position starter Brendan Gibbons took the lead from Shaffer on a lap three restart just before Cody Clark brought out another yellow flag after spinning in turn four. Clark continued on at the rear of the field.

Tenth place starter Brian Calabrese made a great move to go from fourth to second on lap five after getting by both Griffen Mansmith and Shaffer. The next yellow was out on lap five for Troy Zilles who was in the backstretch wall after contact by Jason Reome. Zilles was done for the night at that point with Calabrese taking the lead away from Gibbons on the restart.

Ninth place starter Payton Talbot was the new second place car on lap ten after getting by Gibbons for the position with eleventh place starter Chad Edwards also getting by Gibbons for the third position. As Fonda Speedway announcer Chris Moore put it Talbot and Edwards were together like “peanut butter and jelly” coming from the back of the pack together to get to the front and they would remain together in a great race with Calabrese to the checkered flag.

Talbot and Edwards swapped the second position many times over the closing laps allowing Calabrese to pull away slightly with Clark back in the top five on lap 18 after spinning and going to the rear of the field on lap three. Talbot got a great run on the outside of both Calabrese and a lap car in turn two to take the lead with three laps to go with one final caution coming out on the final lap for Anthony Cardamone who came to a stop on the backstretch with a broken front end.

Talbot fought off one final challenge from Edwards and Calabrese who was pushing Edwards on the final restart and took home his first win of the 2022 season and the second of his career in the division at Fonda in the Ted’s Body Shop #14T followed in the top five by Edwards, Calabrese, Clark, and Chip Constantino. Mark Mortensen finished sixth after starting 26th after repairs were made to the front end of the 1M after contact with the inside wall in turn four during his heat race.

Talbot was the winner of the Crate 602 Sportsman feature at Utica Rome on Friday evening doubling up on the weekend after the win at Fonda just as DeLorenzo did in the Modified division.

“I was kind of struggling on the bottom,” 18-year-old Talbot said in victory lane. “I saw Chad (Edwards) go around me and I thought the bottom was gonna be way better tonight. I really didn’t expect the top to be there at all tonight, but I went out there and it stuck so I was really glad that it was there as it really saved us tonight.”

Chuck Dumblewski led the first eight laps in the Algonkin Motel Pro Stock feature until he slowed on the front stretch with sparks coming from underneath the race car. That brought out the caution with seventh place starter Beau Ballard taking over the lead for one lap until twelfth place starter Nick Stone took over the lead at the halfway point with a pass on the inside of turns three and four with Ballard, Luke Horning, Kenny Gates, and ninth place starter Ivan Joslin completing the top five.

Three more caution flags flew over the remaining ten laps, but Stone held on for his seventh consecutive win of the season and the 66th of his career in the division in the Todd Hoffman owned self-built Manimal chassis over Ballard, Horning, Gates, and Joslin who remained in the top five since the halfway point in the event until the checkered flag waved. Stone was also the winner of the Pro Stock feature at Utica Rome on Friday evening, so he joined DeLorenzo and Talbot on “doubling up” for the weekend.

“This is what we love doing, it’s what we come here to do,” Stone said in victory lane. “We hope these wins go on forever, we had years that we could barely get to victory lane once during the whole season. We all have our years; we enjoy it while it is going on because we know that it could go in the other direction very easily. Concentrating on one track is definitely making us more successful this year.”

Connor Prokop led all fifteen laps in the Montgomery County Office for Aging Inc. Limited Sportsman feature and was followed in the top five by Zach Dufel, Josh Kane, Lance Hill, and Kyle Dingman. It was the first career win for the young man who started go-kart racing at age seven.

“I started racing go-karts at age seven and ran here a couple of times in this division last year,” Prokop said. “This is my first full year of racing and I want to thank my dad who is celebrating his birthday today.”

The CRSA Sprints were also a part of the racing program at Fonda on Saturday evening with two consecutive red flags out on laps one and two for a three-car wreck in turn two that saw Cory Sparks come close to going into the waters of the Mohawk River and the other for Ethan Gray who flipped over in turn two. All drivers were okay after the incidents.

Once things settled down and racing continued, Darryl Ruggles was the early leader for two laps until Jordan Hutton took over the lead on lap three. Jeff Trombley started the event in the fifth position and moved into the second position on lap four, chasing the leader until moving in on the rear bumper of Hutton on lap twelve of the twenty lap event.

Trombley made a move on the inside of the backstretch with seven laps remaining to take the lead and he survived one final restart to take the win over Hutton, Thomas Radivoy, Dalton Herrick, and twenty-first place starter Jeremiah Munson who made his way up to the fifth spot at the finish in his self-owned #51 car. For Trombley it was his second career CRSA Sprint car win at Fonda to go along with thirty-five career Modified wins and two Modified Track Championships in 2001 and 2002.

“Experience here at the track definitely helped,” Trombley told CRSA announcer Brady Houser in victory lane. “He (Hutton) was fast and got out front but on that one restart I knew he was gonna cover the bottom and I got a run on him for the lead. The car was awesome, the track was good. I had a lot of fun, and it was good to see all the fans here. I love this place and anytime you can get a win here it’s a plus.”

Next Saturday, June 11 Bill Lake Modular Homes will present Fan Appreciation Night featuring $5 grandstand admission. There will be a pre-race meet and greet on the front straightaway allowing the fans to see the race cars up close and personal. All divisions will be in action along with the Mohawk Valley Vintage Dirt Modified Series (MVVDMS) and it will also be New York State Stock Car Association (NYSSCA) Night.

To become a member of the NYSSCA organization you can see Fonda Speedway NYSSCA representative Bonnie Mortensen who will be going through the pit area to sign up new members with the cost of a NYSSCA membership being $25 per year.