FRIESEN WINS $4,000 THUNDER ON THE THRUWAY SERIES EVENT AT FONDA 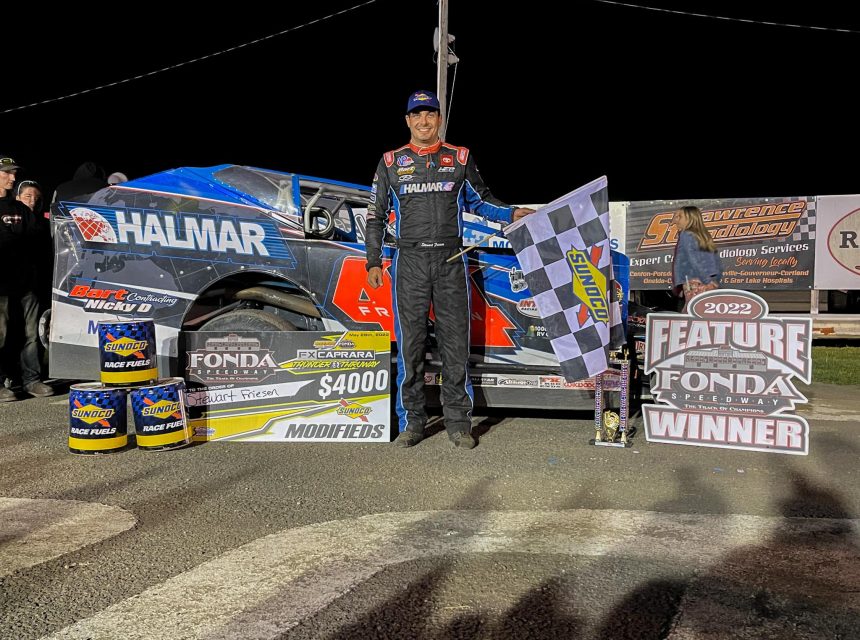 Fonda, NY – On opening day of the 2022 season back on April 24, Stewart Friesen was in victory lane at the “Track of Champions” Fonda Speedway which has become a very familiar place for the driver from Sprakers, NY in recent years. Things haven’t been the same for Friesen at Fonda since the opening day win and on Saturday evening after his second victory of the season and the 81st of his career in the division he said: “It’s been a while since we won a Modified race, so it was good to get back here tonight.”

Friesen used a timely caution to his advantage with six laps to go to get by Craig Hanson for the lead after shutting the door on Hanson going in to turn four after a restart with only a few laps remaining. “I was hoping for the yellow to come out, the track rubbered up on the top and bottom in turns two and four, I could get in there really good on the top but then there was nothing left so the caution was definitely timely. Probably not the most popular win tonight but we’ll take it.”

Pastor Greg Nitz said the invocation to start opening ceremonies for the evening while Mimi Lazzaro sang a beautiful rendition of the National Anthem to celebrate Memorial Day weekend 2022.

Congratulations to Katie from Roseboom who won the nights 50/50 prize of $2,248! Great job as always by the Fonda Speedway 50/50 sellers!

A redraw put Jessica Friesen and Bobby Varin on the front row for the 30-lap Modified feature event with the first attempt at the start being called back. Jessica Friesen took the lead on the second attempt with Varin in tow. The first yellow of the event was out at the completion of lap one for Jessica Friesen who slowed in turn four. She was towed away and done for the evening at that point.

Varin was the leader on the restart with sixth place starter Craig Hanson getting quickly up to the second position. On the inside of the backstretch on lap three, Hanson was the new race leader after getting by Varin with Stewart Friesen and Matt DeLorenzo now second and third after they also got by Varin for position.

Hanson was running the low to middle groove on the track while Friesen ran as high as he could searching for grip to close in on the leader. Hanson was in lap traffic by lap 12 and at the halfway point the top five consisted of Hanson, Friesen, DeLorenzo, eighth place starter Demetrios Drellos, and Varin.

Just after the halfway point Friesen switched to the bottom groove to try and find a way to close in on Hanson which at this point, he was unable to do. The race took a turn on lap 24 when Ray Zemken spun in turn four, giving Friesen the break that he needed with Hanson choosing the inside for the restart. Hanson and Friesen remained side by side into turn two after Joe Kriss threw the green flag with Friesen inching ahead as the two raced down the backstretch. Going into turn four, Friesen shut the door on Hanson and raced to the win in the Halmar #44 Bicknell car.

Drellos made a great move around the outside of both DeLorenzo and Hanson for the second position with only four laps to go but didn’t have enough time to close in on Friesen to challenge for the lead. Drellos, Hanson, DeLorenzo, and fourth place starter Chris Curtis completed the top five.

“It was a good race, when the caution came out, I figured if we were side by side I could kind of get him in dirty air a little bit we might have a chance,” Friesen told Mimi Lazzaro in victory lane. “When I got by for the lead I tried to look and make sure we didn’t hit, it was a clean pass. I’m glad Craig got a win a couple of weeks ago, those guys have a great race team, and I was proud of him as it was a long time coming.”

A redraw set the starting lineup for the Swagger factory Apparel Crate 602 Sportsman 25-lap $1,500 to win feature event with Cody Clark taking the early lead from his pole position start. The yellow flag was out with no laps completed for Tanner Warner and Kurtis Hohensheldt who were in the backstretch wall. Both were done for the night at that point.

Clark led the original restart with Tim Dwyer in tow while eighth place starter Chad Edwards got by both Brett and Mark Mortensen for the third position. Clark held a straightaway advantage by lap four with sixth place starter Payton Talbot getting by Edwards for the third position. A yellow flag on lap eight slowed the field when Clayton DuMond suffered a broken right rear shock.

Thirteenth place starter Brian Calabrese moved into the top five on the restart and next he got by Edwards for the fourth position on lap ten. Clark was in lap traffic on lap 18 and made a great three wide move in turn two to get by two lap cars on the outside and give himself a little breathing room. On the final lap with Joe Kriss ready to wave the checkered flag, he had to quickly change to the yellow flag when Troy Zilles and Brent Cross slowed on track.

Clark held on for his second win of the season and the 15th of his career in the division in the Upstate Motorsports #4 DKM car followed by Talbot, Calabrese, Edwards, and Dwyer.

“I was very fortunate we drew the pole for tonight,” Clark said in victory lane. “The first half of the race the car felt real good, I moved up to the top in turns one and two and then the caution came out and I was nervous about who was behind me. But once we got logging laps again, I moved back up to the top. I tried the top in turns three and four, but it wasn’t good for our car tonight and then the late race caution with one to go I was looking at the checkered flag and you don’t want to hear my words then.”

“All in all, tonight was a good night,” Clark continued to say. “Everybody has to tweak on their cars to try to make them better, so we’ll just keep trying to get it better and better and hopefully we can keep getting back to victory lane. We are still missing a little something and we got to try to get it right.”

Luke Horning led the $1,000 to win Algonkin Motel Pro Stock feature from his pole position start with Kenny Gates second after starting alongside Horning on the front row. The first of many yellow flags was out on lap five with 11th place starter Nick Stone getting up to the fourth position on the restart.

At the halfway point in the event Horning led followed by Gates, sixth place starter Beau Ballard, Stone, and Chuck Dumblewski. Four yellow flags followed in the final laps of the event with Stone utilizing each one of them to his advantage to get to the front. Stone was second on a lap 14 restart and two laps later took the lead away from Horning with a move on the inside of turns three and four.

Stone survived a yellow flag on the final lap and went on to his sixth win in six events at Fonda in 2022 in the Todd Hoffman owned #8N followed by Horning, Ballard, Gates, and Gary Silkey.

“I got under Luke, and it was either hitting the yuke tire or his door, I chose the door,” Stone said after the win. “I get burned out with work and you get busy at home, and it affects your racing. If it wasn’t for Todd (car owner Todd Hoffman) and my crew, I would probably be racing my own car with half the maintenance, and I wouldn’t be where I am now.”

Connor Prokop led the first seven laps of the 15-lap Montgomery County Office for Aging Inc. Limited Sportsman feature until Zach Dufel took over the lead on the inside of turns one and two on lap eight. After wrecking hard, the week before and taking down the caution light in turn one, the crew got the car back together for this week with Dufel leading the remaining laps for his second win of the season followed by Tom D’Angelo, Bob Rowback, Mike Arnold, and Craig Wholley.

Ken and Kerrie Hollenbeck continued their dominance in the Fonda Fair Four Cylinders with victories in the SOHC and DOHC classes respectively as they finished one and two yet again with Chris Hall, Zach Bleau, and Todd Morey completing the top five.