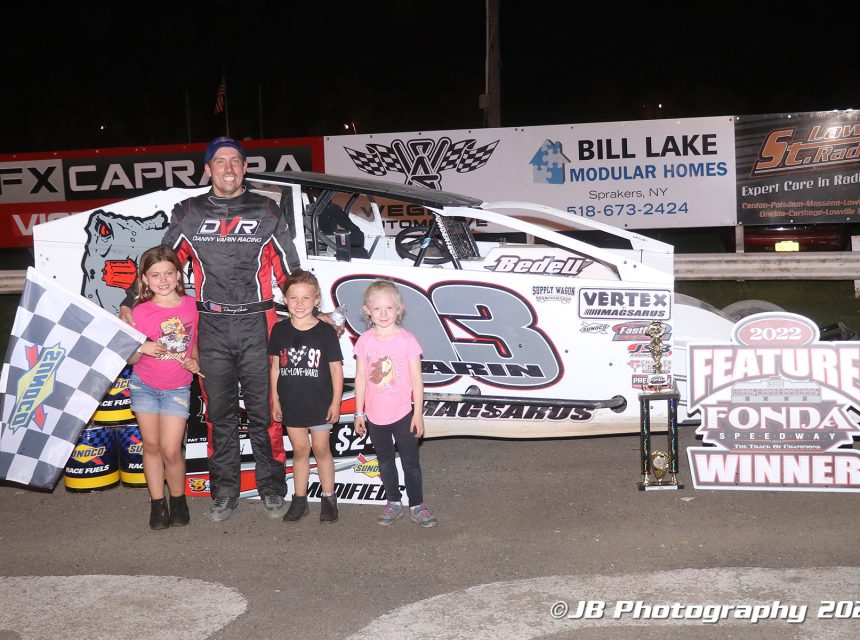 By Jim Ellis for the Fonda Speedway

Varin kept his momentum going by leading every lap of the 30-lap Sunoco Modified feature to collect his first modified feature win at the Track of Champions since August 2019.

“We had to blow up ever motor we had in the shop to get here but this is old reliable from the Fonda 200 last year,” Varin said in Victory Lane. “We put it back in and, I’ll tell you, the thing ran poorly in the heat race, spitting and sputtering. Ed Munger changed the carburetor and got us dialed in. I am speechless to be here. A couple of weeks ago I didn’t think we would make it back.”

Congratulations to John from Gloversville who won the 50/50 worth $2,169! Excellent job as always by Julie, Rose, and Heather selling all of those tickets!

Ryan Odasz and Varin brought the field of 22 modifieds to starter Joe Kriss’ green flag with Varin immediately putting the Magsarus No. 93 out front, while Pep Corradi, Odasz, Jack Lehner and Jessica Friesen locked in a battle for the runner-up spot.

By the fifth lap, Varin had checked out to a full straightaway advantage over Corradi as Friesen pulled into third ahead of Lehner and Dave Constantino.

With Varin a half-track ahead on lap 20, Rocky Warner, Stewart Friesen, Matt DeLorenzo, Bobby Varin and Ronnie Johnson had picked their way into the top 10 and hoping for a caution to bring Varin back to the pack.

Jeremy Tyrrell shook off a streak of back luck to lead the opening laps of the 25 lap Swagger Factory Apparel Crate 602 Sportsman feature before relinquishing the lead to Chip Constantino on lap five.

Constantino was unable to break away from Tyrrell as the caution flew on lap eight, when Mark Mortensen came to a stop with a flat left rear tire. Mortensen and Payton Talbot made their way onto the hot pit to make repairs and rejoined the field at the back of the pack.

Edwards, who started 12th, restarted in eighth and was second behind Constantino when a second caution flew a lap later.

Constantino chose to restart on the outside and held off Edwards on the restart.

The front-running duo distanced themselves from third place running Troy Palmer as they battled side-by-side before Edwards got the lead coming off turn four on lap 18.

Edwards picked his way through the back markers to pick up his third win of the season, while Constantino turned in his best finish of the young season with a second-place finish. Talbot recovered from his early-race pit stop to finish third, with Palmer fourth and Tanner Warner fifth. Cody Clark, Troy Zilles, Mortensen, Tyrrell, and Tim Dwyer complete the second five.

“It was a great run and a great racetrack with two lanes,” Edwards said in Victory Lane on the eve of his birthday. “We were side-by-side there for most of the race once I got up to second. I just kept over driving in turn one trying to get him. I was able to calm myself down and kept hitting my marks and was able to get by him before sliding up to take his line away.”

For Edwards it was his third win of the season to go with a pair of seconds.

Chuck Dumblewski set the early pace over Steve Cosselman before Jason Morrison took over the point on lap eight.

Stone moved to the front a lap later and was starting to break away as the caution flew on lap 15, putting Morrison alongside on the front row and Luke Horning on his bumper for the restart.

Horning dove under Stone heading into turn one to take the lead, but Stone countered the move with a crossover move in turn two to retake the front spot. Horning had his momentum broken by contact as he stayed on the outside of Stone. Horning’s night ended a lap later after making hard contact with the second-turn wall while battling for position with Jason Morrison.

Beau Ballard took over the fight to end Stone’s win streak on the restart and briefly held the lead before the caution flew again, setting up a three-lap shootout for the victory.

“Without a good set of tires under here it would be nothing,” Stone said in Victory Lane. “You could have the best chassis there is and the best suspension there is, but if you don’t have good tire prep and maintenance it does no good. We are on race four with these tires. I think a lot of guys are doing the same thing trying to get through the season, so we are probably going to be due for a couple at least, but we are going to run them as long as we can. Other guys are probably doing the same. So, we are all on an even playing field for sure.”

Zach McSpirit led the opening lap of the Fonda Fair Four Cylinder feature before John Napoli took over on the second circuit.

Kerrie Hollenback moved to the front from his 11th starting spot on lap four and held off his brother Ken for his second-straight overall victory.

Kerrie went to Victory Lane for the DOHC trophy, while Ken took home the SOHC trophy.

Next Saturday, on Memorial Day Weekend the Fonda Speedway will be back in action with the big block modifieds running for $4,000-to-win in the first leg of the FX Caprara Thunder on the Thruway Series, while the Crate 602 Sportsman division will battle for $1,500 to win and the Pro Stocks will vie for the $1,000 winner’s paycheck. Gates will open at 4 p.m. next Saturday with Hot Laps at 6 p.m. and Racing at 7 p.m.

1st career win in the division at Fonda