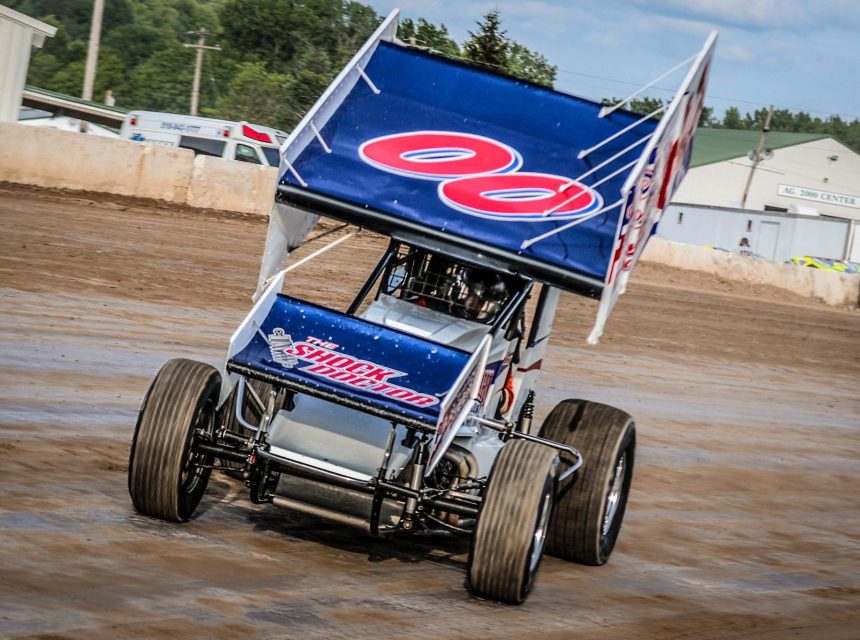 Fonda, NY – For the first time since September 22, 2018, the Lucas Oil Empire Super Sprints (ESS) 360 Sprint Car Series will make a return to the “Track of Champions” this Saturday, May 14. Supply Wagon Rentals will sponsor the evenings racing program with all regular divisions in action along with the ESS Sprint Cars including the Sunoco Modifieds, the Swagger Factory Apparel Crate 602 Sportsman, the Montgomery County Office for Aging Inc. Limited Sportsman, the Algonkin Motel Pro Stocks, and the Fonda Fair Four Cylinders.

The last ESS feature event at Fonda four years ago was led by Danny Varin at the drop of the green flag in the 25-lap feature event with Larry Wight doing double duty and taking over the third spot on lap four after starting fifth. Wight took over the second position from Cory Sparks on lap eight with Bobby Varin also getting by Sparks for the third position after starting eighth.

At the halfway point Danny Varin led the event with Wight, Bobby Varin, Sparks, and Josh Pieniazek in the top five. While Danny Varin continued to lead the event, the last caution of the event slowed the field on lap 19 when something on the left front of Bobby Varin’s car broke and he spun on the front stretch.

The 2018 ESS Championship was on the line between point leader going into the night Jason Barney and challenger Steve Poirier who is a seven-time champion with the ESS. Barney started the event in the 10th position while Poirier who had some issues throughout the evening started in the 13th spot.

When Barney’s front nose wing collapsed on his car early in the event, it caused handling issues and his car was never right for the rest of the race. Poirier on the other hand was making his way methodically to the front, surviving contact on the back stretch by Coleman Gulick on lap 18 which caused Poirier to spin. Poirier did a 360-degree spin and continued on in a great save which kept him in the hunt for the 2018 title when it could have turned out a lot worse.

Poirier got by Pieniazek and Gulick for the fourth position on a lap 19 restart after a caution and with one lap to go was the new second place car after getting by Wight. Varin maintained the lead to the checkered flag, taking his third career ESS win at Fonda and second consecutive win after winning back on Memorial Day weekend at the “Track of Champions.”

With his second-place finish, Poirier was crowned the 2018 ESS Champion for the eighth time in his career, tying Mike Woodring who also has eight ESS titles to his credit.

“I was actually looking forward to the restarts tonight,” Varin said after the win. “I would just move the wing back and get going again. I am racing against a great group of guys here in the ESS, and that makes me a better driver.”

“What a night,” Poirier said at the conclusion of the race. “We battled all night, and I knew that I had to get about five spots ahead of Jason (Barney) to secure the title. “We weren’t supposed to run for the title this year, but we had a little luck along the way and now we have to decide whether to run for the title next year now that we are tied with Mike (Woodring) with eight titles.”

A total of 21 ESS Sprint Car events have been held at Fonda through the years with 13 different drivers winning those events. Justin Barger leads the way with five victories followed by Fonda’s own Danny Varin with three wins. Lance Yonge and Steve Poirier both have two wins apiece while John Brutcher, Bobby Parrow, Tom Taber, Craig Lane, Doug Emery, Jessica Friesen, Jeff Cook, Chuck Hebing, and Stewart Friesen all have one win apiece.

It’s 𝗥𝗔𝗖𝗘 𝗪𝗘𝗘𝗞 at the Track of Champions! For the first time since 2018, the Lucas Oil Empire Super Sprints (ESS) return to Fonda Speedway this Saturday, May 14.

Drive In ($85, up to four passes): http://fonda-speedway.ticketleap.com/may-14th-drive-in/

𝘿𝙍𝙄𝙑𝙀-𝙄𝙉 tickets for this Saturday’s Supply Wagon Rentals presents Lucas Oil Empire Super Sprints (ESS) 360 Sprint Cars – All Divisions can be purchased at the link below.