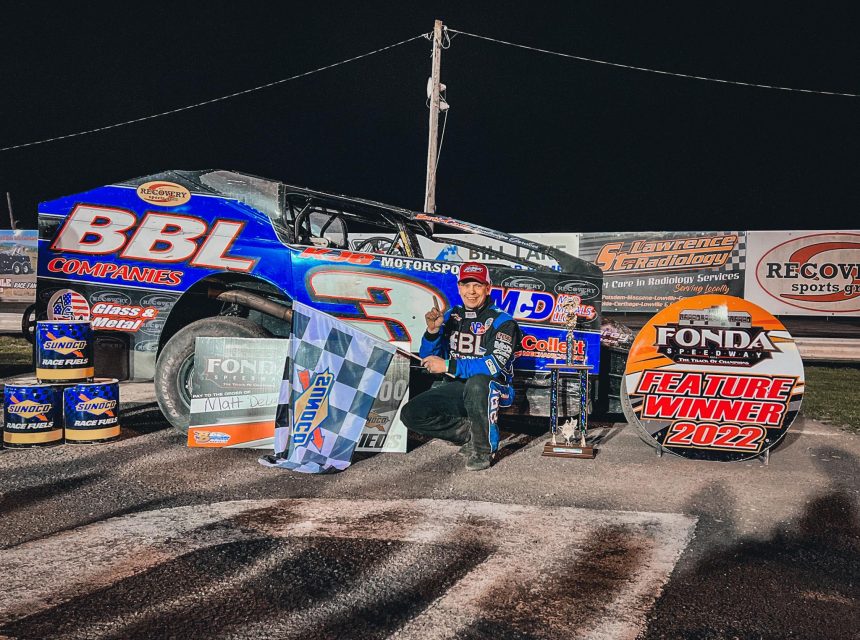 Fonda, NY – Last week Matt DeLorenzo got to the track late, missed his hot lap session, and really didn’t know what he had for a race car. He ended up in victory lane. This week he knew exactly what he had for a race car as he was there for hot laps and ended up in FX Caprara victory lane for the second week in a row after a pass for the lead on the final lap of the 30-lap Sunoco Modified event.

“I knew I was gonna be here tonight,” DeLorenzo told Mimi Lazzaro in victory lane. “We worked on this car this morning after finishing seventh at Albany Saratoga last night. Last week’s win was special but tonight was awesome to be able to get the win on the final lap against Godown.”

“I spent my whole life with those guys,” Ronnie Johnson told the crowd. “They were family. I have a lot of great memories of being at the races with my father, my uncle Joe, JoJo, and Artie. I hope that they are all together up there racing and having a good time. JoJo and Artie were a part of all of my father and my uncle’s wins and championships.”

Fonda Speedway announcer Chris Moore said the prayer for the evening followed by Amanda Valentine who performed the National Anthem.

Great seeing Terri Mohrman back at the track after a recent surgery. She said that she will hopefully be back in her “Teal Suit” in a couple of weeks on the Safety Team.

The luck of the draw put invader Ryan Godown and Tucker O’Connor on the front row for the start of the 30-lap Sunoco Modified feature with Godown taking the lead at the drop of Joe Kriss’ green flag with third place starter 17-year-old Alex Yankowski, sixth place starter and defending Track Champion Rocky Warner, and seventh place starter Stewart Friesen in tow.

With Yankowski, Warner and Friesen battling together for the second position it allowed Godown, who had never seen or run at the Fonda Speedway until tonight, race away to a comfortable advantage. The first yellow flag of the event was out on lap four for Bobby Varin who slowed on the front stretch with a broken right rear shock.

Varin was unable to get back out on track before the race was restarted but caught a break when the red flag came out with no laps completed for a six-car pileup in between turns three and four. The wreck collected 15th place starter Jessica Friesen who was running seventh at the time of the wreck along with Craig Hanson who just can’t catch a break so far in 2022. All drivers were okay after the wreck.

Varin was able to get back out on the lead lap at the rear of the field for this restart with Godown back in the lead. Yankowski continued challenging Godown for the lead on the outside and on lap five he took the lead away from Godown in turns three and four. Yankowski was in lap traffic on lap 11 until JaMike Sowle came to a stop in turn four with a right rear flat. He was able to pit and return at the rear of the field.

Yankowski chose the outside groove for the restart and maintained the lead with 12th place starter Matt DeLorenzo getting by Stewart Friesen for the third position. Another car on the move was defending Track Champion Ronnie Johnson who started the event in the 19th position and was running in the top five just before the halfway point with the top five consisting of Yankowski, Godown, DeLorenzo, Stewart Friesen, and Johnson.

Godown retook the lead from Yankowski on a restart after a lap 18 caution for Jack Lehner who suffered a flat left rear tire while running in the top ten. DeLorenzo was able to get the second position on the restart with Friesen third while Yankowski fell out of the top five. While Godown was running the outside, DeLorenzo was running the inside and challenging for the lead in the turns.

When the final caution of the event came out with four laps to go it set up what announcer Chris Moore called the “Money Restart” with Godown maintaining the lead at the drop of the green flag. After seeing the nose of DeLorenzo many times in each of the turns, Godown decided to try and block DeLorenzo by going low in turn one on the final lap. Godown pushed up in turn two allowing DeLorenzo to get under him and by the time the two got to turn three DeLorenzo was the new race leader.

DeLorenzo would go on to his 39th career win at the “Track of Champions” in the BBL Companies #3D Enders big block powered Bicknell car followed by Godown, Friesen, Warner, and Johnson. “The Track of Champions showing why it is one of the best in New York State,” announcer Chris Moore said during the final laps of the event.

“To be able to do this two week in a row is special and awesome,” DeLorenzo said in victory lane. “I was just trying to keep the car as straight as I could.”

Michael Ballestero led the first two laps of the 25-lap Swagger Factory Apparel Crate 602 Sportsman after starting on the outside pole with Brett Mortensen in tow after starting fourth. Mortensen took the lead away from Ballestero on the outside of turn four and by lap five held a straightaway advantage. Mortensen was in lap traffic three laps later with 13th place starter Chad Edwards now in the fourth position. At the halfway point Mortensen continued to lead with Edwards now second followed by Ballestero, Troy Zilles, and 12th place starter Cody Clark.

Just after completing lap 13, Mortensen was trying to go around the outside of the lap car of Michael Wagner-Fitzgerald when Wagner-Fitgerald decided to change lanes and hit Mortensen putting him into the turn one wall. Mortensen then climbed the wall and rode on top of it for a short time before coming to rest back down on the track. Fortunately, Mortensen was not injured after the wild ride.

Edwards inherited the lead after the caution with Clark getting up to the second position on the restart. Clark was on Edwards’ rear bumper when the yellow came out with just over five laps to go. Sixteenth place starter Brian Calabrese was the new second place car on the restart after getting by Clark with one final caution out with five laps to go.

Inside five laps to go the restarts are single file with Edwards being pressured heavily by Calabrese after the green flag flew again. Calabrese used the outside in turns three and four on lap 22 to get by Edwards for the lead and went on to his seventh career win in the division in the LM Mason Contracting #21C. Edwards, Clark, Zilles, and Jason Reome completed the top five.

“Chad (Edwards) changed lanes early in the event and we lost some positions over that which upset me a little bit, but I just had to settle down and see what we could do,” Calabrese said in victory lane. “My car was good on the top and the bottom and when my car is that good, I feel that nobody is gonna beat us.”

Steve Cosselman led the first four laps of the 20-lap Algonkin Motel Pro Stock feature before all-time division win leader Kenny Gates took over the lead after starting eighth. The yellow flag was out on lap seven for Luke Horning who spun intentionally in turn three to bring out the caution, went to the hot pit for repairs, and continued on at the rear of the field.

Nick Stone was the new fourth place car on the restart and got by Shane Playford at the halfway point with Gates leading followed by Cosselman, Stone, Playford, and ninth place starter Beau Ballard. Stone was in the second position when the yellow flag came out on lap 13 and on the restart took the lead away from Gates.

Stone led the remaining laps for his 62nd career win in the division over Gates, Playford, Ballard, and Cosselman.

“The track was great with two lanes to race on,” Stone said in victory lane. “Gonna have to earn these wins now with handicapping causing us to start in the back.”

Josh Kane led all 15-laps in the Montgomery County Office for Aging Inc. Limited Sportsman feature event for the first win of his career in the division. He was followed in the top five by Michael Kalkbrenner, Connor Prokop, Zach Dufel, and Kyle Dingman.

Shawn Hemstreet led lap one of the Fonda Fair Four Cylinder feature with Zach McSpirit leading laps two through five. Ken Hollenback took the lead away on lap six and went on to his third win of the season and the 71st of his career in the single overhead cam class while Kerrie Hollenback finished second and was declared the dual overhead cam winner for his second win of the season and the 23rd of his career in the division.

Next Saturday, May 14 Supply Wagon Rentals presents the racing action at Fonda consisting of the Lucas Oil Empire Super Sprints (ESS) 360 Sprint Cars along with all other regular divisions. Gates will open at 4:00 p.m., Hot Laps at 6:00 p.m., and Racing at 7:00 p.m.

7th career win in the division for Calabrese.

3rd win in a row and 62nd of his career in the division for Stone.

3rd win of 2022 and 71st of his career in the division for Ken Hollenback.

2nd win of 2022 and 23rd of his career in the division for Kerrie Hollenback.