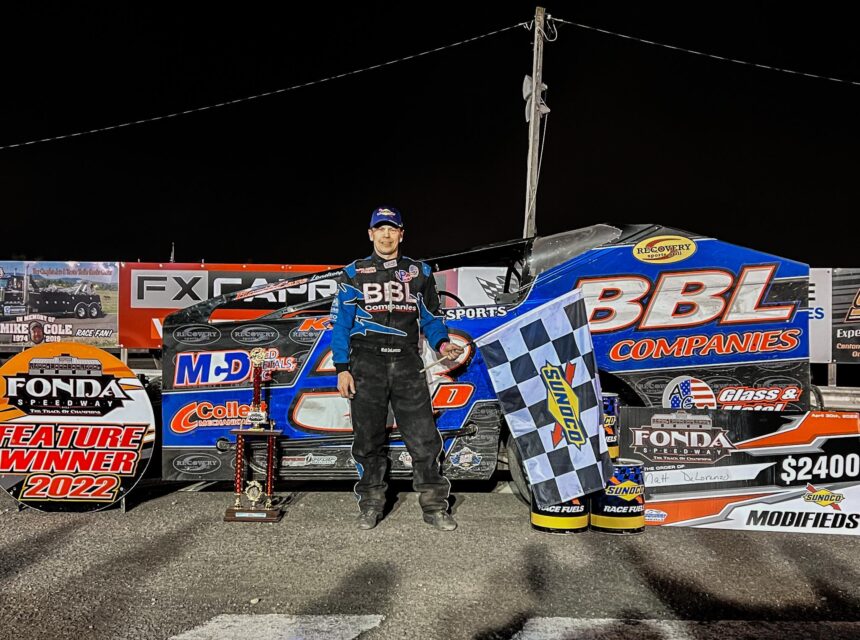 FONDA, NY – On Saturday afternoon, Matt DeLorenzo attended a softball game that his daughter competed in and afterwards got to the Fonda Speedway to compete in the evenings racing program. When he got to the track everything was ready for him and that was key in being able to score the win in the Sunoco Modified division.

After the 30-lap Sunoco Modified feature was completed, DeLorenzo stood in FX Caprara victory lane at Fonda for his 38th career win at the “Track of Champions”. The victory was his first win at Fonda since 9/14/2013 and it also tied him for 10th on the All-Time Win List in the division with CD Coville!

“I have to thank my brother Mike and my teammate Brian (Gleason), DeLorenzo said as he stood in victory lane with the checkered flag. “I got to the track late after attending my daughter’s softball game and they prepared me a great racecar. Brett Deyo is doing a great job here at Fonda and believe me I know how difficult of a job promoting is. To get the win here tonight was awesome.”

The Don Gras Memorial racing program for the MVVDMS began with a car show by the Vintage competitors at the Fonda Speedway Museum followed by the competition on the racetrack. Don was a true race fan who went to the races on a weekly basis at not only Fonda but other local tracks as well. You could always see Mr. Gras at the track along with his two racing buddies Bob Austin and Don Peterson and if there was a definition of a race fan in the dictionary it would include those three names.

During opening ceremonies, Ed Biittig read a story written by Terri Mohrman about Mr. Gras saying, “Don Gras was a true and trusted friend, I had the opportunity to care for him once he came home and gave him the “Teal Suit TLC Treatment”. “I can’t thank the Gras family enough for allowing me to care for him and making him comfortable at home.”

The 30-lap Sunoco Modified feature began with Jessica Friesen and JaMike Sowle on the front row with Friesen leading at the drop of Joe Kriss’ green flag followed by third place starter Rocky Warner in his new ride at Fonda for 2022 owned by Tadd Parks. Pep Corradi brought out the first yellow of the event on lap three when he came to a stop in the infield on the front stretch. On the restart, Warner took the lead away from Friesen with fourth place starter Matt DeLorenzo now second.

Seventh place starter Dave Constantino had a great run-on Saturday evening, getting by Jack Lehner for a spot in the top five on lap six. Back up-front Warner was running the extreme outside on the track while DeLorenzo was running about as low as you could go on the bottom of the track. The two ran side by side in the turns through lap 12 but each lap Warner used momentum on the outside to maintain his lead.

That all changed on lap 13 when DeLorenzo ducked under Warner for the lead in turns three and four. At the halfway point in the event the top five consisted of DeLorenzo, Warner, Jessica Friesen, Constantino, and 12th place starter Stewart Friesen who was racing a tribute #68 racecar in honor of his late Uncle Alex Friesen who as announcer Chris Moore put it was “a revolutionary promoter who was ahead of his time.”

Just past the halfway point in the event, DeLorenzo moved to the outside with the car working anywhere he put it on the racetrack. With ten laps to go DeLorenzo was out to a straightaway advantage over Warner with Stewart Friesen advancing positions in the closing laps. One by one Stewart Friesen was able to get by Constantino, Jessica Friesen, and with two laps to go got by Warner for the second position.

DeLorenzo was out to a straightaway lead at that point and went on to the win in the BBL Companies #3D Bicknell car over Stewart Friesen, Warner, Ronnie Johnson who came up from his 14th starting position, and Jessica Friesen.

“You’re making me sound old,” DeLorenzo said to Mimi Lazzaro in victory lane as they discussed the win being his first win since 2013. “My brother said that I can’t run a big block, but I guess I showed him tonight. That’s the only motor that we have right now so were gonna have to make it work. Tonight, I was just trying to keep the car as straight as I could.”

The 25-lap Swagger Factory Apparel Crate 602 Sportsman feature began with pole position starter Cody Clark in the lead with the red flag out before any laps were completed for a wreck in turn four involving Payton Talbot, Dylan Eldred, and Justn Severance who actually went over the concrete wall and came to rest between the concrete wall and catch fence. All drivers were okay after the wreck.

On the restart, Clark continued to lead followed by outside front row position starter Greg Havlichek with positions being shuffled behind the top two. Fourth place starter Mark Mortensen was trying to get to the outside of Havlichek in turn one early in the event with contact made by Havlichek, forcing Mortensen back to the sixth position. Brian Calabrese took advantage of the contact and moved into the third position at that point.

The yellow was out at the halfway point for Tim Dwyer and again on the restart forcing the next restart to be single file by Fonda Speedway rules with Clark still leading followed by Calabrese, fifth place starter Chad Edwards, Mortensen who got back up to the fourth position, and Havlichek.

Edwards got by Calabrese for the second position with ten laps to go with 23rd place starter Tanner Warner up to the sixth position and Talbot who was involved in the lap one accident back up to seventh after restarting at the rear of the field. Clark ran into lap traffic with ten laps to go allowing Edwards to close in during the final laps with Warner in the top five on lap 22 after getting by Clayton DuMond.

On the final lap going into turn four, Clark pushed up the track allowing Edwards to get by for the win, his second of the season and the 15th of his career in the division at Fonda in the John Kollat Motorsports #10%. Clark, Calabrese, Mortensen, and Warner completed the top five. Warner was declared the winner of the Greco’s NAPA Hard Charger Award after advancing eighteen positions from 23rd to 5th.

“It is tough to start on the pole,” Edwards said in victory lane. “I just kept trying to reel him in and I felt like I was catching him, then when he got out of the brown while in lap traffic, I was able to get by him for the win.”

Lance Hill started on the pole for the 15-lap Montgomery County Office for Aging Inc. Limited Sportsman feature and took the lead at the drop of the green flag. Hill led every lap in the event for his first career win in the division at Fonda followed by Connor Prokop, Zach Dufel, Jonathan Feagles, and last week’s winner Kyle Dingman.

The 20-lap Algonkin Motel Pro Stock feature began with All-Time Win leader in the division Kenny Gates on the pole and taking the lead at the drop of the green flag. Last weeks winner Nick Stone started the event from the fourth position and was the second-place car behind Gates with fifth place starter Luke Horning third.

Stone was the new race leader on lap four after getting by Gates on the outside of turn four with Horning also getting by Gates for the second position. At the halfway point, Stone was the race leader followed by Horning, Gates, Beau Ballard, and Shane Playford. Despite a yellow flag with three laps to go, that was the top five at the checkered flag with Stone getting the 61st win of his career in the division at Fonda.

“It was a different track tonight,” Stone said in victory lane. “I was just trying to keep my momentum up and not spin my tires.”

John Napoli led the first two laps in the 10-lap Fonda Fair Four Cylinder feature with Kerrie Hollenback taking the lead away on lap three after starting seventh. Kerrie’s brother Ken started the event in the 12th position, took the lead on lap seven, and went on to his 70th career win in the division in his single overhead cam race car. Kerrie Hollenback finished second and was declared the dual overhead cam winner with Napoli, Lee Horning, Dale VanAllen.

Next Saturday, May 7 will be $1 Night at Fonda with $1 grandstand admission and racing in all regular divisions. Starting next Saturday gates will open at 4:00 p.m. with hot laps at 6:00 p.m. and racing at 7:00 p.m.

1st career win for Hill in the division at Fonda