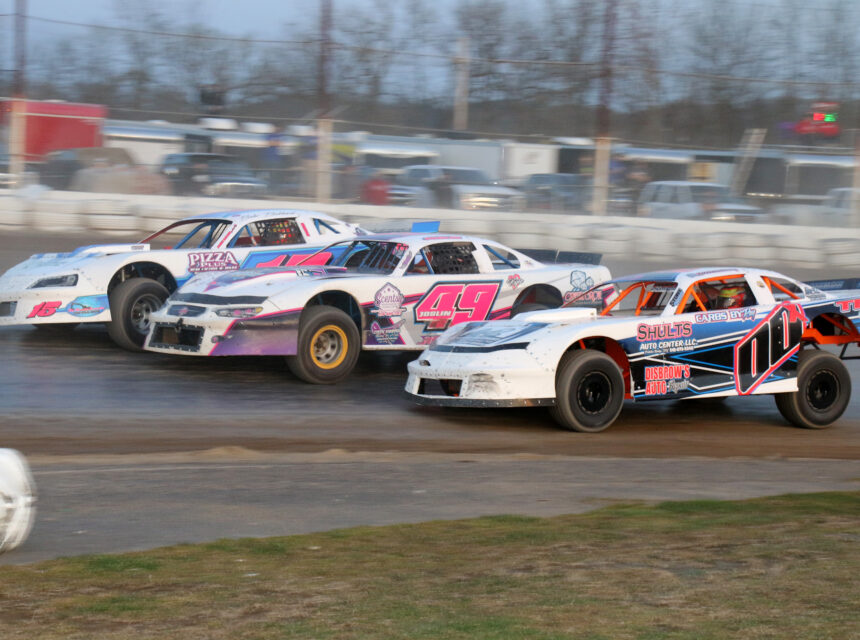 Fonda, NY – After a successful racing program last Sunday to open up the 2022 season with a total of 129 race cars in the pit area, attention now turns to a regular racing program in all regular divisions including the Sunoco Modifieds, the Swagger Factory Apparel Crate 602 Sportsman, the Montgomery County Office for Aging Inc. Limited Sportsman, the Algonkin Motel Pro Stocks, and the Fonda Fair Four Cylinders this Saturday, April 30.

The Mohawk Valley Vintage Dirt Modified Series will also be in action at Fonda on Saturday with a special Don Gras Memorial event honoring a beloved race fan and a true gentleman. MVVDMS cars will be on display at the Fonda Speedway Museum starting at 2:00 p.m. on Saturday afternoon!

One year ago this week, a driver won the first Sunoco Modified feature of his career at Fonda in a race car that has played a big part in Fonda Speedway history. First career wins are special moments in a driver’s racing career. But to win in a car that has ties to the history of a racetrack makes it even more special to not only the driver but the race team as well.

That is what took place on Saturday evening May 1, 2021, at the “Track of Champions” Fonda Speedway when Jack Lehner took the iconic family-owned Nelson Motorsports #85 to the FX Caprara Victory Lane after leading all 30-laps of the Sunoco Modified feature event.

The Nelson Motorsport’s/Bloomfield’s Florist sponsored #85 has been a part of Fonda Speedway history for many years with both Bill and Erik behind the wheel of the car at Fonda, Erik with a win in the Open Sportsman division back on 7/30/2005. Demetrious Drellos also drove the Nelson Motorsports #85 to victory lane at Fonda for his first career win back on 6/16/2018.

In victory lane last Sunday evening on Opening Night 2022 at Fonda, the winner of the $12,000 to win Andy’s Speed Shop sponsored Montgomery County Open Stewart Friesen said that a special announcement would be coming out of the Halmar Race Shop this week. Special just doesn’t cover the announcement which was made on Wednesday of this week by Friesen and the Halmar Racing Team in a video on Facebook.

“So, for our Darlington Throwback we decided to do an auction with the proceeds going to AIM Autism where the highest bidder could pick our scheme for an idea and layout for a throwback truck at Darlington,” Friesen said in the video. “Shawn & Billie Beckhorn, with a $4,000 bid going to AIM Autism were the winners, which we are super appreciative and grateful for.”

“They decided on a Jack Johnson car, one of my favorites when I was a kid growing up. “It is really cool to represent Jack and kind of the Northeast Modified History in racing in the Camping World Truck Series at Darlington next week. So, a big thanks, it looks awesome, and hopefully it’s as fast as it looks.”

Part of the video was an interview from the past with Jack Johnson, asking him what it meant to be a fan favorite and to be idolized by all of his fans.

“It means a lot, it really does,” Johnson said in the interview. “I walk through the pits at Fonda or come in the parking lot, and for the fans to still be there, I think I must have done something right through all those years. It is really an honor, it really is.”

Another part of the video was Ronnie Johnson talking about the throwback paint scheme and how it came to be.

“Stew kind of blindsided me with this, he came over and started talking to me about it. Then he showed it to me, and it took me a minute to realize what was going on,” Ronnie Johnson said. “As I’m sitting here thinking about it, it is such an honor. For my dad to be a dirt track racer and to be able to be recognized by so many people in so many levels of racing, it’s truly an honor.”

“It was an Olsen car, my fathers Syracuse Super Dirt Week car from 1992 actually,” Ronnie continued. “We re-skinned it over the winter and Gary Marr came up with the paint scheme. My dad always had the neon orange colors, hand painted, and hand lettered. It is just a really cool throwback car; I think he made a good choice.”

The Darlington throwback race for the NASCAR Camping World Truck Series will be televised on Friday, May 6 at 7:30 p.m. on FS1 so be sure to tune in and be part of a historic evening honoring Fonda Speedway legend Jumpin’ Jack Johnson!

It’s 𝙍𝘼𝘾𝙀 𝙒𝙀𝙀𝙆 at Fonda Speedway. The action resumes at the Track of Champions this Saturday, April 30.

If you are a race fan that gets to the track early, be sure to check out the Fonda Speedway Museum & Hall of Fame which is located on the Fonda Fairgrounds at the rear of the parking area going down towards turn four. The museum is open from 3:00 p.m. to 6:00 p.m. on race days and admission is free but this Saturday, April 30 the Mohawk Valley Vintage Dirt Modified Series will have their nostalgic race cars on display at the museum starting at 2:00 p.m.