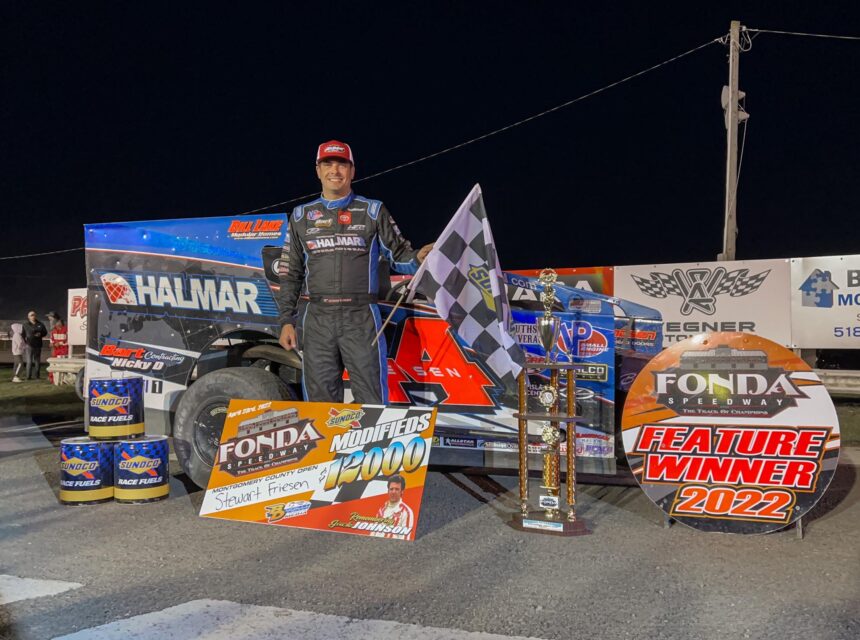 Fonda, NY – It took three tries to get “Opening Night 2022” in the record books at the “Track of Champions” Fonda Speedway with a familiar face in victory lane after the 40-lap Montgomery County Open Jack Johnson Memorial Sunoco Modified feature was completed on Sunday evening. When Joe Kriss’ checkered flag flew at the completion of the race Stewart Friesen stood in FX Caprara victory lane with his 80th career win at Fonda.

“That was real nerve wracking there,” Friesen said about the race and all of the restarts. “After being at Orange County last night being able to come here to Fonda today and win in honor of a legend, this is special.”

129 race cars filled the pit area for the event with Gregory Nitz saying the prayer during opening ceremonies and Mimi Lazzaro singing the National Anthem. Nitz worked under Pastor David Wells and Ed Harkins in the past and always wanted to become the chaplain at the local speedways and Sunday evening he got his chance at Fonda.

Lazzaro also mentioned Terri Mohrman in her comments during the opening ceremony, offering thoughts and prayers to Terri for a speedy recovery after a recent surgery. Mohrman is a member of the “Teal Suits” Fonda Speedway Safety Team, and she was missed by all of the fans, staff, and management of the Fonda Speedway on Sunday evening. Get well Terri so you can get back to the track and do what you love to do.

By the luck of the draw Stewart Friesen and Matt DeLorenzo started the event on the front row with Friesen taking the early lead. DeLorenzo was the race leader on lap two after getting by Friesen with an impressive move on the outside in turns three and four. DeLorenzo pulled away to a comfortable lead but when Friesen moved up to the high groove he quickly closed in on the leader.

On the restart, Friesen took the lead away again with DeLorenzo in tow while seventh place starter Rocky Warner moved up to the third position after getting by both Jessica Friesen and Michael Maresca. Warner was the new second place car on lap ten and four laps later was closing in on Friesen for the lead.

After Bobby Varin slowed on the front stretch on lap 14 to bring out the caution, Stewart Friesen chose the bottom for the restart and maintained the lead over Warner and eighth place starter Matt Sheppard who was now third. Sheppard was the only car running the low groove on the speedway and making it work with the top five at the halfway point being Stewart Friesen, Warner, Sheppard, DeLorenzo, and Maresca.

Sheppard took the second spot away from Warner with fifteen laps remaining while Stewart Friesen was three wide in turn two to get by the lap cars of Ronnie Johnson and Mike Mahaney. Warner was having issues getting by a lap car on lap 30 and ended up in the turn one wall bringing out the final caution flag in the event.

Stewart Friesen again chose the inside on the restart with Maresca and Jessica Friesen both getting by DeLorenzo for the third and fourth positions during the closing laps in the event as Stewart Friesen pulled away to the win in the Halmar/Southside Beverage #44. Sheppard, Maresca, Jessica Friesen, and DeLorenzo completed the top five.

“Big thanks to Halmar and my crew, this is a very special win in the Jack Johnson Memorial event as he was a legend here at Fonda,” Friesen said in victory lane.

“I could never get the hang of these 50 compound tires,” Sheppard said after finishing second. “We adjusted on the car before the feature and now I’m sorry that I did that. It’s great to be here at Fonda for such a special event.”

“I thought the car was good at first, but I made a mistake on the restart trying the middle and lost a lot of ground,” Maresca said after his third-place finish. “But we were able to come back.”

Chad Edwards led the 25-lap Swagger Factory Apparel Crate 602 feature at the start from his outside front row starting position with pole position starter Dan Santabarbara in tow. The red flag was out on lap two after the fourth-place car of Jeremiah Munson made contact with the wall in turn one and again at the end of the wall in turn two. The car slid sideways to the right and flipped over but fortunately Munson was not injured.

One final caution came out on lap 17 for Stephen Gray who slowed in turn two with Clark going to the pit area at that point and out of the event. Talbot was the new second place car on the restart but could only watch as Edwards pulled away to his 14th career win in the division. Talbot, Santabarbara, Tim Dwyer, and Brian Calabrese completed the top five in the event.

“We ended last season this way and now we’re back at it,” Edwards told Mimi Lazzaro in victory lane. “We built a new car two years ago but haven’t used it yet because this one is so good.”

Defending Fonda Speedway Algonkin Motel Pro Stock Track Champion Nick Stone led the first three laps of the 20-lap event before Luke Horning took the lead away with a slide job pass in turn two on a restart. Stone returned the favor one lap later with a slide job pass of his own in the same spot, sliding up in front of Horning at the exit of turn two.

At the halfway point in the event, Stone continued to lead followed by Horning, sixth place starter Ivan Joslin, ninth place starter Beau Ballard, and 11th place starter Josh Coonradt. Stone held a comfortable lead until the final few laps when Horning and Joslin were closing the gap. Neither ever got close enough to challenge Stone as he went on to his 60th career win in the division in the Todd Hoffman owned #8N over Horning, Joslin, Ballard, and Coonradt.

“Luke (Horning) is always better on restarts than I am,” Stone said. “He takes advantage of me with those moves. I knew that I wanted to run the top so I wanted to get up there as soon as I could, it was too fast up there to let it go. Luke and I run real tight with each other and if we have contact, we talk about it and shake hands in the pit area afterwards.”

The 15-lap Montgomery County Office for Aging Inc. Limited Sportsman feature was a good one with the winner not decided until the final laps. Tim Deffer was the leader of the first eleven laps until a lap car blocked his progress allowing Tom D’Angelo to get by for the lead. Kyle Dingman started the event in the eighth position and lap after lap made his moves to the front.

Dingman took over the third position on lap ten and the second spot three laps later. On the inside of turn four with two laps to go, Dingman got by D’Angelo for the lead and went on to the win over D’Angelo, Deffer, Jonathan Feagles, and Walter Cook. The win for Dingman was the third of his career in the division.

John Napoli took the lead on lap two of the 12-lap Fonda Fair Four Cylinder feature event and led the remaining laps for his third career win in the division as a dual overhead cam race car. Zach McSpirit finished the event in the second position with defending Fonda Fair Four Cylinder Track Champion Ken Hollenback finishing third and being declared the single overhead cam winner for his 69th career win in the division. Dale VanAllen and Gina Voris completed the top five in the event.

On Saturday, April 30 all divisions will be in action along with the Mohawk Valley Vintage Dirt Modified Series who will present the “Don Gras Memorial” event. The Algonkin Motel Pro Stocks will compete for a $1,000 to win with gates opening at 3:00 p.m. followed by hot laps at 5:30 p.m. and racing at 6:30 p.m.

80th career win for Stewart Friesen in the division at Fonda

14th career win for Edwards in the division at Fonda

60th career win for Stone in the division at Fonda

3rd career win for Dingman in the division at Fonda

69th career win for Hollenback in the division at Fonda

3rd career win for Napoli in the division at Fonda

$50 given to both winners, Napoli and Hollenback, from Timothy’s Towing