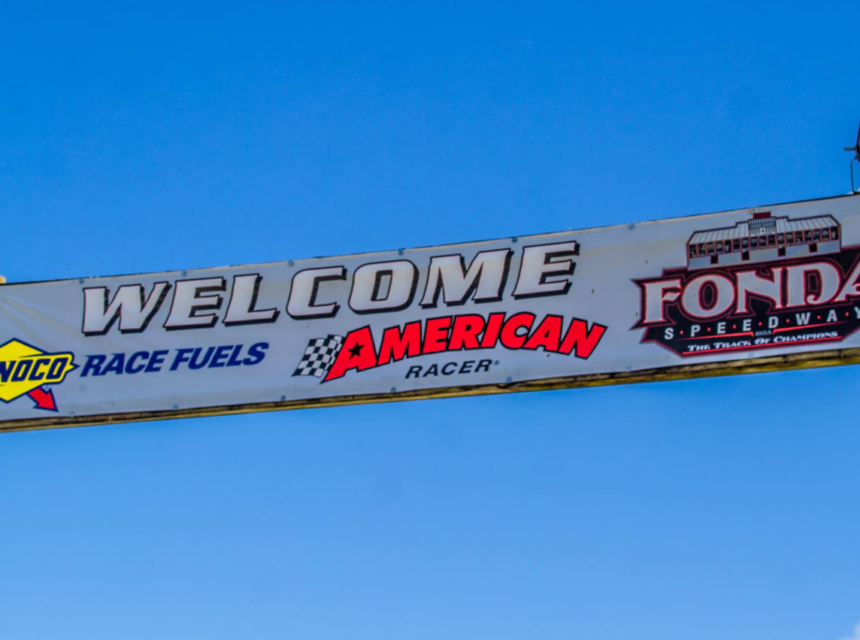 Fonda, NY – After a rain out last Saturday, Opening Day at the “Track of Champions” Fonda Speedway will now take place this Saturday April 23 with a special $12,000 to win Jack Johnson Memorial Montgomery County Open for the Sunoco Modifieds.

Also, in action on Saturday will be all of the other regular divisions including the Swagger Factory Apparel Crate 602 Sportsman, the Algonkin Motel Pro Stocks, the Montgomery County Office for Aging Inc. Limited Sportsman, and the Fonda Fair Four Cylinders. Points will begin for all divisions this Saturday as well.

The Mohawk Valley Vintage Dirt Modified Series will also be in action at Fonda on Saturday with a special Don Gras Memorial event honoring a beloved race fan and a true gentleman. MVVDMS cars will be on display at the Fonda Speedway Museum starting at 2:00 p.m. on Saturday afternoon!

There have been five previous Jack Johnson Tribute events held at Fonda over the years and here is a look back at the results:

Fonda Speedway closed out their 60th season of competition on Sunday evening September 23, as a racing program honoring Jumpin’ Jack Johnson saw 12’s being the number of the day with a $12,000 purse for the 112-lap Modified main event. When all was said and done, Mike Mahaney was the winner of the big paying event.

“$12,000 this is awesome,” Mahaney said after exiting the Woodside Farms sponsored #21 Troyer car in victory lane. “And to honor Jack (Johnson), WOW! RJ (Ronnie Johnson) is a class act; he came over and wished me good luck before the race. I was just trying to be smooth and not give up the bottom line and when Ronnie got into me a couple of times, he was just trying to tell me that I have to go faster. What a way to cap off the season, I can’t imagine a better season than this one, I can’t believe it.”

On July 29, a sea of orange embellished Fonda Speedway on Jack Johnson Tribute night with defending track champion Stewart Friesen presenting his own tribute. Friesen changed the paint scheme on the Tadd Parks-owned No. 1 to a design carried by Johnson at the 2008 Super DIRT Week. Then he put the Johnson-tribute car in Victory Lane at the end of the 50-lap, $5,000-to-win Empire State Champion 50 — A tribute to Jumpin’ Jack Johnson.

“Tadd Parks and Eric Mack thought it would be cool on this big orange night to support Jack Johnson and ALS to do a Jack Johnson paint scheme,” Friesen said in Victory Lane. “They worked together with Dutchess Overhead Doors and Pilat to get it lettered up with Jack’s 2008 Syracuse paint scheme. We are going to take it off after this event. One side is going to go in the [Fonda Speedway] museum over here and Tadd wants to keep the roof. The track definitely came to us, we were a little bit tight the first couple of laps, so I ran the pan hard up a little bit to free it up then about lap eight or nine this thing was on rails.”

Matt Sheppard took the lead with ten laps remaining in the 60-lap, $5,000-to-win, event honoring 11-time Fonda Speedway champion Jumpin’ Jack Johnson on August 10. “Once we got out front, I knew we were okay, but I just didn’t know if we would ever get there,” Sheppard said in Victory Lane. “I think I was better on the top and the bottom but catching him [Friesen} and passing him are two different things. I kept working him and working him. Finally on that restart we were able to get that crossover and get the lead.”

The “Track of Champions” Fonda Speedway held the Third Annual Jack Johnson Tribute event on Wednesday evening August 2, a 50-lap feature event paying $5,000 to win. When the checkered flag flew it was Mike Mahaney taking the big win in the Buzz Chew #88 Bicknell car after taking the lead on lap 22.

“The track had a lot of grip in it tonight and I was just trying to stay close to the 9S (Matt Sheppard) who was leading early so that if he made a mistake I could capitalize on it,” Mahaney said in victory lane. “Then I was able to make it around Matt and a lap car for the lead.”

The luck of the draw placed Rocky Warner on the pole position for the start of the 40-lap, $12,000 to win Montgomery County Open at the Fonda Speedway on Saturday night April 24 in the Jake Spraker owned #1J Teo Pro Car, leading all 40-laps on his way to the victory in a race dedicated to Fonda’s all-time winningest driver Jumpin’ Jack Johnson.

“I actually hate starting on the pole I’d rather start fifth or sixth, but I just stayed on the bottom and after trying to decide whether to run a softer tire we ran the same tire that we run here weekly and it worked,” Warner said. “Last week the car just wouldn’t run, Jake came in the shop and said what’s wrong, so we sent the carburetor out and thanks to Pro Power and Willy’s for their help getting it straightened out.”

Announced award payouts for this year’s event as of the time this release was written include a $112 bonus for the first on the hook from the famous Fonda Speedway “Tow Van”. B & B Dumpsters will also pay out a $212 Hard Charger Award to the driver advancing the most positions in the event and Finish Line Landscaping will pay a $112 bonus to all Modified heat race winners for Saturday nights event.

The Fonda Speedway infield Drive-In will also be open on Saturday with tickets available for purchase at the following link http://fonda-speedway.ticketleap.com/april-23rd-drive-in…/

Saturday’s event sponsor Andy’s Speed Shop has their own family history at the “Track of Champions” with Andy Romano, Mike Romano, and AJ Romano all part of the history of the Fonda Speedway.