FONDA SPEEDWAY HOLDS A SUCCESSFUL CAR SHOW LEADING UP TO THE FIRST GREEN FLAG OF 2022 FOR PRACTICE ON SATURDAY, APRIL 9 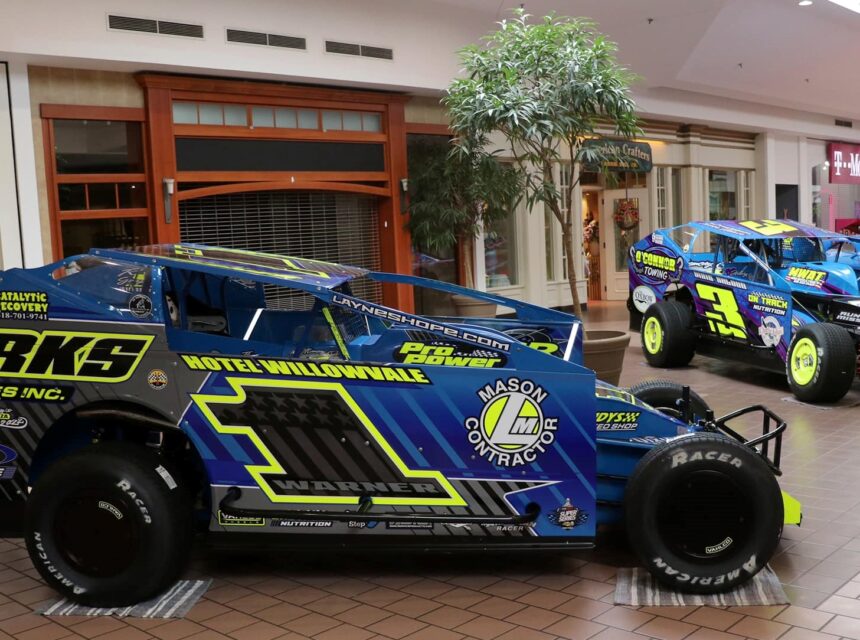 Fonda, NY – On Friday, March 25 through Sunday, March 27 the “Track of Champions” Fonda Speedway held their annual car show at the ViaPort Rotterdam Mall. A total of fifty-eight race cars, Go-Karts and Slingshots were on display, giving fans plenty to look at as everyone looks forward to the 71st consecutive season of racing at the Montgomery County Fairgrounds facility. The looks on the kid’s faces as drivers handed them a picture of their race car was special as each driver may have gained a new fan out of the exchange.

Four booths were set up at the car show, one by the Fonda Speedway offering schedules, season grandstand passes, season pit area passes, and information regarding the 2022 racing season. Also set up at the show were track photographers Jeff Karabin and Brittany Nelson of JK Signworks & Photography, Michael Jackson of Swagger Factory Apparel, the Northeast Stock Car Old Timers (NESCOT), and the Mohawk Valley Vintage Dirt Modified Series (MVVDMS) who had an area set up called “Vintage Alley” representing the many eras of our racing past from the 1950’s up to the late 80’s with nine beautiful cars.

New York State Stock Car Association (NYSSCA) memberships were also available at the MVVDMS booth or from NYSSCA representative Bonnie Mortensen who was on hand at the car show. The Utica Rome Speedway, which is managed by BD Motorsports Media just as the Fonda Speedway is, had schedules and information available at the show as well.

The first green flag of the 2022 season will fly at the “Track of Champions” on Saturday, April 9 with an open practice session from 3:00 p.m. to 6:00 p.m. The rain date for the open practice, if necessary, will be on Sunday, April 10.

Opening Day for the 71st consecutive season of competition at the “Track of Champions” Fonda Speedway will be on Saturday, April 16 as Carole and Alton Palmer of Palmer’s Service Center presents all regular divisions in action with points beginning for all divisions. Gates will open at 3:00 p.m. with hot laps at 5:30 p.m. and racing at 6:00 p.m.