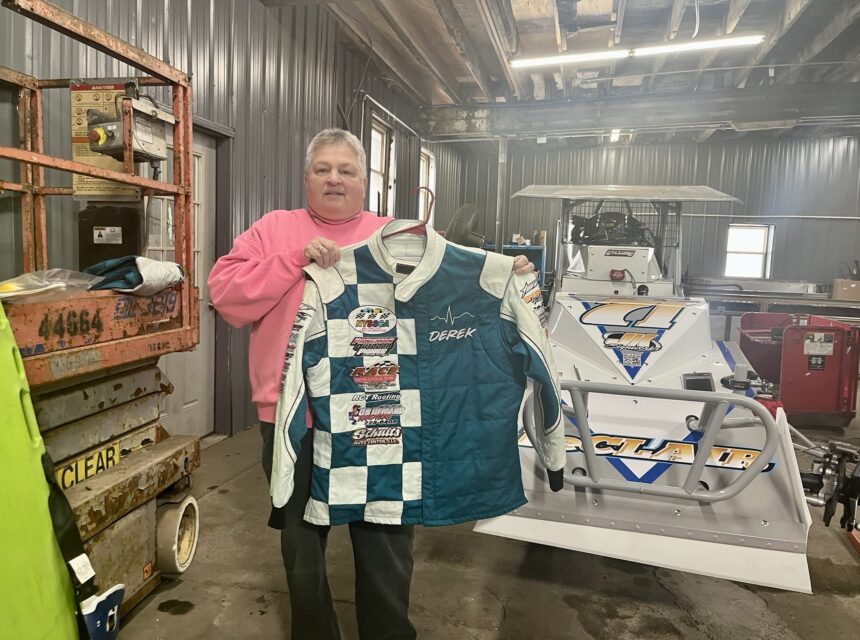 Hagaman, NY – On Saturday morning March 5 the Teal Suits Safety Team serving the Fonda, Utica Rome, and Glen Ridge Motorsports Park went through training at the DKM Fabrications facility in Hagaman, NY. It was the third time that Terri Mohrman and her team have trained at the DKM facility. “Kudos to DKM for allowing us to come into their shop in order for us to go through our training session,” Mohrman said. “Cars in the shop are in different stages of completion so it makes it easier to show the different parts of the car to our Safety Team.”

2022 will be the 39th year that Mohrman has served on the Safety Team at local speedways, and she appreciates every member of her team for the help that they provide. “Because I have been around for so long, I am recognized more so than many of the other people on our team,” Mohrman said. “But I want to assure them that they are all a very important part of the team and I appreciate all of their efforts.”

Ninety percent of the people on the Safety Team have been trained and handpicked by Terri so she feels as though that is a big advantage to her. “I am fortunate that I have the cream of the crop working with me,” she said. “I know who I have and who I am working with and that is important. We’re not here trying to change the world; we are here to do the best job that we can to protect our drivers.”

THE EVOLUTION OF THE TEAL SUITS

One year at the Glen Ridge Motorsports Park during an Enduro event, there was an accident where a car didn’t go at the start of the race and was rear ended by another car. It changed the way that Terri and one of her team that was with her that evening Bonnie Reuss looked at keeping themselves safe.

“The car took a hard hit, and it was the only time that I have ever cut a race car,” Mohrman said. “Bonnie was in the car with the patient, and I was working with the patient from the outside of the car when we both looked at each other at the time and said that we smelled gas. There we were in nylon t-shirts and jeans and at that point I said that we could never let that happen again.”

Terri and Bonnie went up and down pit road and asked the drivers and teams if they would be interested in donating in order for them and their Safety Team to get the proper suits, similar to what the drivers wear, in order to protect them properly. “Twenty-nine people came back with donations in order for us to get five suits,” Mohrman said. “All of the people that donated have their names or business logos embroidered on the suits to thank them for their contribution.”

Working with Michael Jackson of Swagger Factory Apparel the suits were ordered with a little different color from the rest. “Everybody wears red, yellow, or orange so we decided on teal green,” Mohrman said. “The name came to us from Michael Jackson after his accident when he thanked the Teal Suits and it kind of stuck with us ever since.”

One of the contributors to the purchase of the “Teal Suits” was made by the New York State Stock Car Association (NYSSCA) who also have a program called the “NYSSCA Members Benefit Fund” to help people at the racetrack, whether it be a driver, crew member, or fan, who gets injured at a sanctioned racing event. For NYSSCA members the organization pays out $125 a week for up to 26 weeks with medical documentation.

After seeing a video on the “Resue Boa”, Mohrman had an idea to make her own version of the product which is used in England for rapid extractions. “I had an idea on how to make one and it consisted of a king size bed sheet and a nine-foot strap cut in half,” she said. “This is the first time it is introduced to this area, and it will be used in order to extract a driver without a lot of extra movement.”

While vacationing in Florida last month, Mohrman was able to attend a Safety Training Class given by ESI Equipment Inc. who trains different organizations to understand today’s challenges in fire, EMS, Rescue, Law Enforcement, and other entities according to their website www.esiequipment.com

“While down in Florida I was a guest at the ESI Safety Training class given by John Evans,” she said. “When I found out the class was going to be held, I tried to sign up for it but was told the class was full. Mr. Evans didn’t want to turn me down however because of my enthusiasm on the topic so he allowed me to attend as his guest.”

KEYS TO THE SAFETY TEAMS SUCCESS

Drivers also play a big part in this as well. “When the race director calls yellow, yellow, yellow, in turn two for example, the drivers need to know that there is gonna be activity going out on the track to the scene of the wreck,” she said. “A lot of times the drivers don’t do their part, same when the red flag comes out. When the red flag comes out don’t worry about catching up to the field, STOP wherever you are on the track!”

Attending the Safety Team training session on Saturday were in no particular order Al Moxham, Andrew Peo, Jeremy Horstmyer, Bonnie Reuss, Dwayne Gallt, Jill Dunham, and Nick Squires. Also helping out this season will be Matt Traudt and John Brisbane who were not able to attend the training session.

2022 will be Andrew Peo’s first full year after being involved a little bit last year. His family has been involved in racing for a while and this is something that he has always wanted to do. He will be primarily at Utica Rome and when needed at Fonda in Fire Safety.

Al Moxham works for state fire and also volunteers at West Winfield. He will be working every Friday at Utica Rome and will be doing multiple shows at Fonda as well in Fire Safety. Moxham actually grew up in Fonda and always went to the Fonda Speedway on Saturday nights. Last year Terri called him needing help at the track one night. After that one-night Terri then asked Al if he wanted to finish out the season and he agreed to do that. 2022 will be Al’s second full year at Fonda and after Nick Squires offered him the Utica Rome position midway through last year he will be back there as well.

Nick Squires started at Fonda when Matt DeLorenzo was the promoter as a corner flagger. After getting as far as he wanted to with that, Squires decided to try something else. He became an EMT at college and now he is in the fire department as well, so he worked his way around the racetrack more or less. Overall, he has been working at the track for eight years and the safety side of it for the last two years. He will be at both Fonda and Utica Rome this year.

2022 will be Jeremy Horstmyer’s fifth full year at Fonda and he will also work part time at Utica Rome. Jeremy never watched a race before, but once Terri did his EMT class she liked what she saw and brought him into the Safety Team, and he is now hooked!

Dwayne Gallt has been a paramedic for 30 years and got his start as track safety at Fonda when Ric Lucia took over the track, starting out on the ambulance. He was then asked by Terri to come and work with her on the infield, and he has been there ever since. He will work on the Safety Team at Fonda full time and fill in as needed at Utica Rome.

Bonnie Reuss met her husband Mike at Fonda and has been involved in the safety side of racing for nine years give or take. Before that she helped on various race cars, working on Tony Pepicelli’s racecar for 15 years gaining her a lot of knowledge on the racecar itself which comes in handy to everyone on the Safety Team. She will be at Fonda, Utica Rome, and Glen Ridge every week.

Jill Dunham has been involved for a few years now and has known Terri for almost 30 years after Terri tested her for Jill’s original EMT. 2022 will be Jill’s fourth year at Fonda and she worked at Utica Rome for the first-time last year.

SOME TAKEAWAYS FROM THE TRAINING SESSION