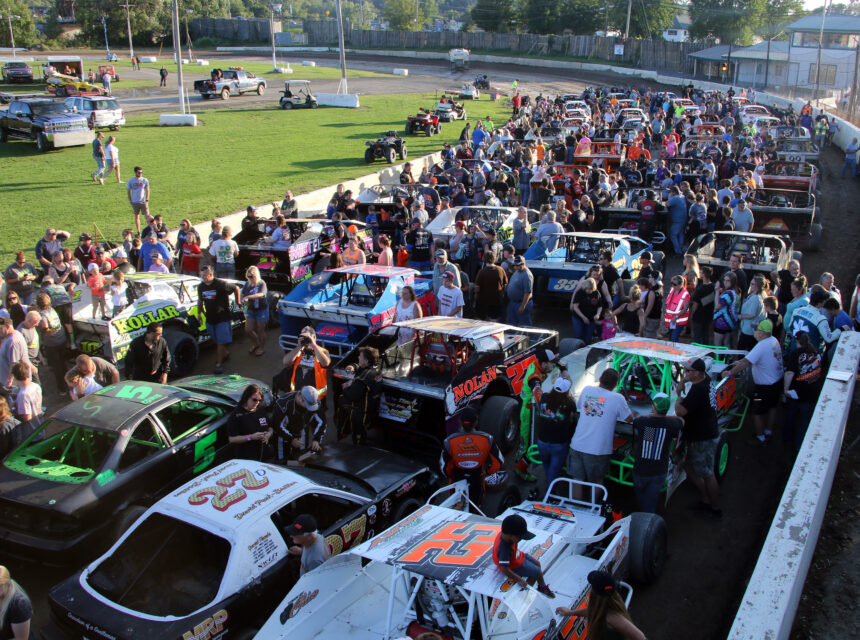 Fonda, NY – After struggling through the 2020 racing season due to the Covid-19 pandemic, Brett & Heather Deyo of BD Motorsports Media LLC along with General Managers Jamie & Denise Page and their entire staff came back stronger than ever in 2021 which was the 70th season of racing at the “Track of Champions” Fonda Speedway.

Great crowds, increased car counts, and a large point fund due to the hard work of all the 50/50 raffle sellers highlighted the third year that the BD Motorsports LLC team promoted the Montgomery County Fairgrounds facility in 2021, with plans for 2022 already underway.

“2019 was a fantastic year at the Fonda Speedway but in 2020 we did whatever we could to keep going,” Deyo said at this year’s awards banquet. “What kind of struck me this year that things were back to normal was the night that we honored Jack Johnson. The crowds were back, the cars were back with almost two hundred cars in the pits that night. That was a monumental night and it got us back to normal.”

“This year we were able to put Fonda Speedway on Flo Racing and all season there were no less than 8,000 viewers watching. Most nights there were up to 11,000 watching and some nights up to 26,000! It was a huge step in getting exposure for our style of racing for not only the track sponsors but also all the sponsors on your racecars.”

“It was a good season overall at Fonda with good crowds and car counts which were up in both the Swagger Factory Apparel Crate 602 Sportsman and Fonda Fair Four Cylinder divisions. We were able to put together the $53,000 to win “Fonda 200” again am I am proud to announce that we’ll be doing that again in 2022 on September 15-17. We have seventy-three new lights to go up at Utica Rome and the Fonda Fair Board has also approved new lighting at Fonda as well.”

Four very special events were held during the 2021 season at the “Track of Champions” honoring four great drivers who helped make the Fonda Speedway the historic track that it is. Rocky Warner was the winner of the $12,000 to win Montgomery County Open honoring Jack Johnson in April of this year. Two prior events were held at Fonda to honor Johnson, one in September of 2012 when Mike Mahaney won the $12,000 to win event and the other a $5,000 to win event in August of 2017 which Mahaney also won.

Six prior Lou Lazzaro Memorial events were held at Fonda over the years with Seth Gano the winner in 2000, Matt DeLorenzo in 2006 & 2010, Friesen in 2014, and Ronnie Johnson in 2016. One Lazzaro Memorial event was also held at the Utica Rome Speedway back in 2007 with Willy Decker winning that event.

DIFFERENT WINNERS IN ALL DIVISIONS

Nineteen events were held in the Sunoco Modified division with seven different drivers winning those events. Stewart Friesen led the way with eleven victories while Rocky Warner and Mike Mahaney were both two-time winners. Jack Lehner, Jessica Friesen, Ronnie Johnson, and Brett Haas were all single event winners. For Lehner, Jessica Friesen, and Haas it was their first career wins in the division at Fonda.

There were ten different winners in a total of seventeen events in the Swagger Factory Apparel Crate 602 Sportsman division led by Chad Edwards and Cody Clark, both with four wins apiece. Brian Calabrese was a two-time winner with single event wins going to Brian Borst, Jason Greco, Jason Reome, Tucker O’Connor, Mark Mortensen, Tanner Warner, and Payton Talbot. For Greco, Reome, O’Connor, Warner, and Talbot it was the first wins of their career in the division.

Six different drivers were winners in the fifteen events in the Montgomery County Office for Aging Inc. Limited Sportsman division led by Jeremy Tyrrell, Stephen Gray, and Clayton DuMond all with three wins apiece while Carter Gibbons, Kyle Dingman, and Taylor LaPlante were all two-time winners in the division. The wins for Tyrrell, Gibbons, Dingman, LaPlante, and DuMond were first career wins at Fonda in the division.

Nick Stone led the way with a total of six wins in the Algonkin Motel Pro Stock division followed by Luke Horning with four victories; Kenny Gates with two wins; Beau Ballard, Devon Camenga, Josh Coonradt, and Jim Normoyle all with one victory apiece. All total there were sixteen events run with seven different drivers reaching victory lane. For Ballard and Camenga it was their first career wins in the division. Ballard was also a three-time winner at Fonda in the IMCA division, all the wins coming during the 2008 racing season.

Sixteen events were run in the Fonda Fair Four Cylinder division with both a Single Overhead Cam and a Dual Overhead Cam winner declared in each feature event. Seven different winners won the events led by Ken Hollenback with thirteen wins (SOHC), Slappy White with eight wins (DOHC), Kerrie Hollenback with four wins (DOHC), Tyler White with three wins (DOHC), Wayne Russell Jr. with two wins (SOHC), Shawn Hemstreet (SOHC) and PJ Bleau (DOHC) both with one win apiece. The wins for both Slappy and Tyler White were the first of their careers at Fonda.

The Mohawk Valley Vintage Dirt Modified Series (MVVDMS) made four appearances in 2021 at Fonda with the drivers winning in their respective divisions as follows (multiple wins in parenthesis):

The CRSA Sprints made three appearances at Fonda in 2021 with Josh Flint, Mike Kiser, and Jordan Hutton winning those events. For Flint and Hutton, it was their first career wins in the division at Fonda.

Paulie Colagiovanni was the winner of the Patriot Sprint Tour Earl Halaquist Memorial while Matt Mosher won the first of his career at Fonda in the one and only Street Stock feature held in 2021.

For the first time in the history of the “Track of Champions” Fonda Speedway there was a tie for the Sunoco Modified Track Championship between Ronnie Johnson and Rocky Warner. For Johnson it was the third title of his career at Fonda (2011, 2016, 2021) and for Warner it was his second title (2019, 2021).

Chad Edwards was crowned the Swagger Factory Apparel Crate 602 Sportsman Track Champion for the third time in his career (2018, 2020, 2021) while Nick Stone took his third career title in the Algonkin Motel Pro Stocks (2014, 2020, 2021). Carter Gibbons won the first title of his career at Fonda in the Montgomery County Office for Aging Inc. Limited Sportsman.

THUNDER ON THE THRUWAY SERIES

A series between the two BD Motorsports LLC promoted racetracks, the Fonda Speedway and Utica Rome Speedway was held in 2021 with a total of five events held in the Modified, Crate 602 Sportsman, and Pro Stock divisions. Stewart Friesen won all five events at the two tracks in the Modified division, three at Utica Rome and two at Fonda, and was crowned the Modified Champion of the series.

A six-race series was held in 2021 for the Algonkin Motel Pro Stock division at Fonda with extra purse money on the line for each event. Luke Horning won three of the events while Nick Stone was the winner of the other two with one event being rained out.

Famed car owner Jake Spraker retired from racing at the end of 2021, but he went out in style, adding another Track Championship to his list of accomplishments at the “Track of Champions” with Warner behind the wheel. With this years Modified Track Championship Spraker now has a total of 11 Track Championships at Fonda including a Pro Stock title in 1999 with Steve Welch as his driver.

Warner won three consecutive Track Championships for Spraker in the Crate 602 Sportsman division at Fonda in 2015, 2016, and 2017. while Spraker’s first Modified Track Championship at Fonda came in 1989 with Mike Romano as his driver. Bobby Varin was a three-time Modified champion in Spraker’s car back in 2005, 2006, and 2008 while Ronnie Johnson drove the #1J to the championship in 2016. Warner won two championships for Spraker at Fonda back in 2019 and this year in 2021.

Both Spraker and Kollar were inducted into the Fonda Speedway Hall of Fame in 2017 for their accomplishments at the “Track of Champions.”

Stone drove the Todd Hoffman owned #8 to the Pro Stock Track Championship this season with Hoffman himself winning the Fonda Pro Stock title for four consecutive years in 1985, 1986, 1987, and 1988. Hoffman currently sits third on the All-Time Win List in the Pro Stock division at Fonda with a total of fifty-one victories.

Congratulations to all car owners and drivers for their accomplishments during the 2021 season at Fonda. Plans are currently underway for the 71st season of competition at the Montgomery County Fairgrounds facility and you can keep up with those plans by going to the track website www.thefondaspeedway.com or on Facebook at www.facebook.com/thefondaspeedwy

Since 1953, the “Track of Champions” Fonda Speedway has hosted the best in stock car racing. Under the management of BD Motorsports Media LLC, the speedway will operate weekly on Saturday nights from April through August plus several special events in 2022. Fonda Speedway is located on the Montgomery County Fairgrounds off New York State Thruway Exit No. 28 at 21 S. Bridge Street Fonda, NY 12068.