$105,725 DISTRIBUTED AT THE VERNON DOWNS CASINO HOTEL HONORING COMPETITORS FROM THE FONDA AND UTICA-ROME SPEEDWAYS 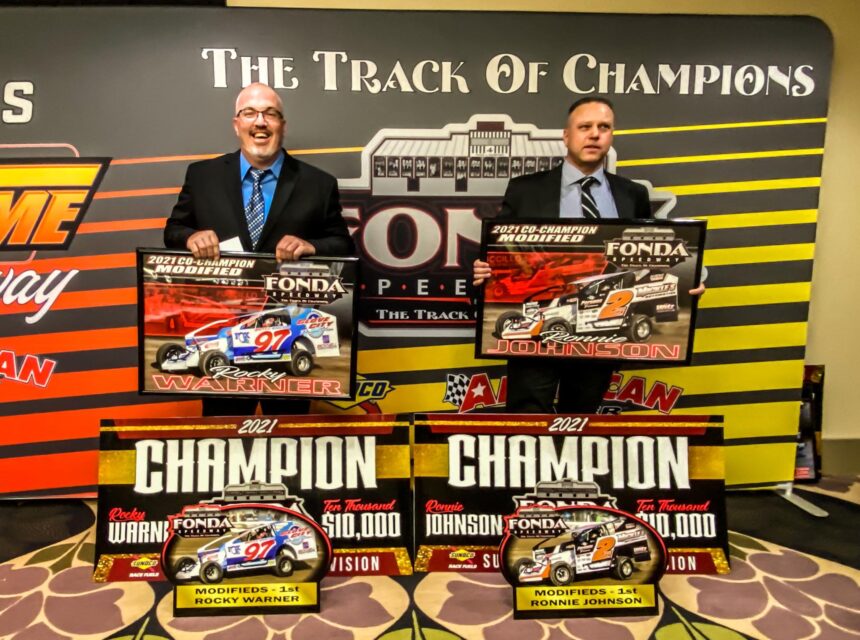 VERNON, NY – The 2021 racing seasons at the “Track of Champions” Fonda Speedway and the “Home of Heroes” Utica-Rome Speedway were celebrated on Friday evening November 19 at the Vernon Downs Casino Hotel in Vernon, NY. Brett and Heather Deyo of BD Motorsports Media, who promote both racetracks, paid out a total of $105,725 to competitors in all different divisions from both weekly speedways.

There were 350 people in attendance to honor the top ten finishers in weekly division points at both Fonda and Utica-Rome along with the top ten drivers in the Thunder on the Thruway Series, a six-race series between both tracks. Stewart Friesen (Modified) and Matt Janczuk (Sportsman) were also honored for their championships in the American Racer Cup presented by Sunoco Race Fuels. Short Track Super Series announcer Jeff Ahlum emceed the event with a delicious buffet included for all the guests.

The invocation was given by Pastor Gregory Nitz of the Finish Line Chaplaincy who stressed the importance of family and biblical principles.

“It is great to see this turnout tonight,” Brett Deyo said to the crowd. “Everybody is going to be pretty close friends tonight because we jammed everyone in here, but it is awesome to have this many people interested in what we are doing and wanting to be here to celebrate it. It shows that our program is alive and well.”

Dinner was up next followed by what Jeff Ahlum stated as the “State of the Union” address by BD Motorsports Brett Deyo who said in his own words:

“2019 was a fantastic year at the Fonda Speedway but in 2020 we did whatever we could to keep going. What kind of struck me this year that things were back to normal was the night that we honored Jack Johnson. The crowds were back, the cars were back with almost two hundred cars in the pits that night, and instead of the sheriff coming in to tell me to knock it off he was back helping us park cars because we had so many people coming through the gates. That was a monumental night and it got us back to normal.”

“This year we were able to put Fonda Speedway on Flo Racing and all season there were no less than 8,000 viewers watching. Most nights there were up to 11,000 watching and some nights up to 26,000! It was a huge step in getting exposure for our style of racing for not only the track sponsors but also all the sponsors on your racecars. We showcased the Pro Stock division and how good it is at Port Royal and were able to put the Pro Stocks on the map there with a huge exposure.”

“It was a good season overall at Fonda with good crowds and car counts which were up in both the Sportsman and Four Cylinder divisions. We were able to put together the $53,000 to win “Fonda 200” again am I am proud to announce that we’ll be doing that again in 2022 on September 15-17. We have seventy-three new lights to go up at Utica-Rome and the Fonda Fair Board has also approved new lighting at Fonda as well.”

“Utica Rome was the feel-good story of the year for us, I got to know Gene Cole back when I was writing for the Area Auto Racing News, and we hit it off. Gene started hinting around that Utica-Rome may be available last August, but it took till January of 2021 for me to get the call asking me if I wanted the track. One of the lines that I use as an excuse when I do this crazy stuff is “God hates a coward.”

“I told them we would give it a shot, met with them and decided to change race nights, rules, tires, fuel, and purses. We decided to roll the dice and boy did it turn out great. The first few weeks we had to prove ourselves and show that we were for real on Friday nights. I hate to thank anybody individually because I may forget someone, but Jamie Friesen turned the track around so no more slipping and sliding at Utica-Rome. It is awesome to have a cushion and I think that is one of the reasons we came back so strong.”

“We held some big money races again at Utica Rome and the crowds and car counts went up as the season went on making it a very satisfying deal to have Utica-Rome turn around like it did. In 2022 the All Star 410-Sprints will be back at Utica-Rome for the first time in several years on August 20. The New Yorker on September 4 will feature a $80,000 purse with $25,000 going to the winner.”

“This banquet is the end of a long season for us with a total of eighty events being run. Thanks to Jamie and Denise Page, they do it all, they are so good at rallying people to help them because they are such kind people. We could not do it without them. Another guy that does not get much credit is Craig Hanson who runs the grader at Fonda on Saturday nights while trying to race and keep all his sponsors on his racecar and everyone around him happy. We proved at the Fonda 200 this year that we have a good surface.”

“When I was writing out checks at five o’clock this morning tonight’s point fund totaling $105,725 for two weekly racetracks really hit me. I need to thank American Racer, Lias Tire, and Sunoco Race Fuels but I think the real heroes in all of this are the 50/50 ticket sellers. They did an outstanding job week after week with a $10,000 prize at the Fonda 200. It was amazing week after week seeing what they were able to do to make this all possible. I am very proud of what we were able to pay out tonight, what we were able to do as a group, and I think that we’ve got a brighter future ahead.”

Continuing on with the track championship awards, David Hackett Jr. (Fastline Performance Limited Sportsman at Utica-Rome) and Carter Gibbons (Montgomery County Office for the Aging Inc. at Fonda) were crowned the champions in the Limited Sportsman division in point funds totaling $1,525 at both tracks.

The Next Generation Graphix Pro Stock division at Utica-Rome had a point fund total of $4,900 with $1,000 of it going to Beau Ballard for his championship. When asked about how it felt to win the championship Ballard responded “Pretty damn good. We caught some lucky breaks but did what we had to do, kept our nose to the grindstone and got it done. “We’ll be back next year to go on defense.”

Nick Stone was the recipient of $1,500 out of a total point fund of $5,775 for his third title at Fonda and second in a row in the Algonkin Motel Pro Stock division. “We had a great season,” Stone said to the crowd. “I couldn’t do it without Todd Hoffman and his crew along with all of the guys on my #27 crew. It is a 100% team effort between both teams who do all the work and take all of the stress off of me so that I can concentrate on driving the race car.”

The drivers in the Worthington Industries Crate 602 Sportsman division at Utica-Rome shared a total of $7,350 in their point fund with $1,500 of it going to their 2021 champion Matt Janczuk. “Overall, it was a great year for our team,” Janczuk said. “Thanks to my wife and family, we raced a lot this year, and thanks to Brett Deyo for opening up Utica-Rome again. Utica Rome is in my back yard, and it is where I learned how to race. It was a huge swing for us switching to Teo this year and also from bars to coils but we are already looking forward to 2022.”

Chad Edwards collected $2,000 out of a total point fund of $7,850 for his third title in the Swagger Factory Apparel Crate 602 Sportsman division at Fonda and his second title in a row. “It was a great year,” Edwards said. “I have to thank car owner John Kollar who has been in this sport for over 50 years at Fonda and all of my crew. I also have to thank my mom and dad who took out a $10,000 loan in order for me to start my racing career years ago. I remember being young when I started racing but now, I’m in my mid thirties with a lot of young talent coming up.”

The point funds in the Fuccillo Autoplex of Nelliston Thunder on the Thruway Series totaled $11,150 in the Modifieds, $3,025 in the Crate 602 Sportsman, and $2,675 in the Pro Stocks. Stewart Friesen won $4,000 for his title in the Modifieds while Chad Edwards and Nick Stone won $1,000 apiece for their titles in the Crate 602 Sportsman and Pro Stock divisions, respectively.

Matt Sheppard was crowned the Sunoco Modified Track Champion at Utica-Rome for 2021 collecting $6,000 for his efforts in a total point fund of $20,525. For Sheppard it was the fifth title of his career at Utica Rome.

“Utica-Rome has been in my blood for over 20 years,” Sheppard said to the crowd. “Thanks to Brett (Deyo) for opening the track back up this year. I race for a living and sometimes the business side of it takes all the fun out of it and makes it more of a job. I used to race at the Outlaw Speedway on Friday’s which is a couple of hours from home but now I’m racing closer to home at Utica-Rome on Fridays where I have decided to race for fun again.”

For the first time in its 70-year history, the “Track of Champions” Fonda Speedway had a tie for the Sunoco Modified point championship between Ronnie Johnson and Rocky Warner. The two drivers each earned $10,000 for their point titles in a total point fund at the track of $34,975! For Johnson it was his third championship at Fonda while for Warner it was the second of his career at Fonda.

“When the season started, I didn’t know that we were going to be racing at Fonda,” Johnson said. “The honor that everybody gave my dad, it was a little emotional, my race team and everybody else wanted us to race at Fonda. Right down to a couple of days before opening night it was a 180-degree swing and we decided to race at Fonda. I’m glad that we did, and it feels good to be back home.”

“We weren’t prepared to run at Fonda, we had all big block motors, and it took us up until the end of the season to get a small block,” Johnson continued to say. “I need to thank my entire race team including Chris Persons, Frank Witz, and Gary Mickle who built us a new race shop after my dad got sick and we had to move out of the old shop. Also special thanks to Carl Lamalfa who is here with us tonight. He was my father’s best friend and he used to bring my dad lunch every day.”

“Hats off to my guys who kept me going all season,” Warner said. “It was a great season and great to see Jake (car owner Jake Spraker) go out on top. RJ is the peoples champion but I’m thankful that we have a good following of our own fan wise.”

Both drivers were quick to give credit to Stewart Friesen who finished just five points behind them in the final point standings.

“It is fun racing with Stew,” Johnson said. He reminds me of my father, and he certainly knows his way around Fonda. He is a class act and pushes us to an all-new level.

“Stewart is making us all better at Fonda,” Warner said.

Be sure to keep an eye on the track websites www.uticaromespeedway.com and www.thefondaspeedway.com for schedules and announcements regarding the 2022 racing season.