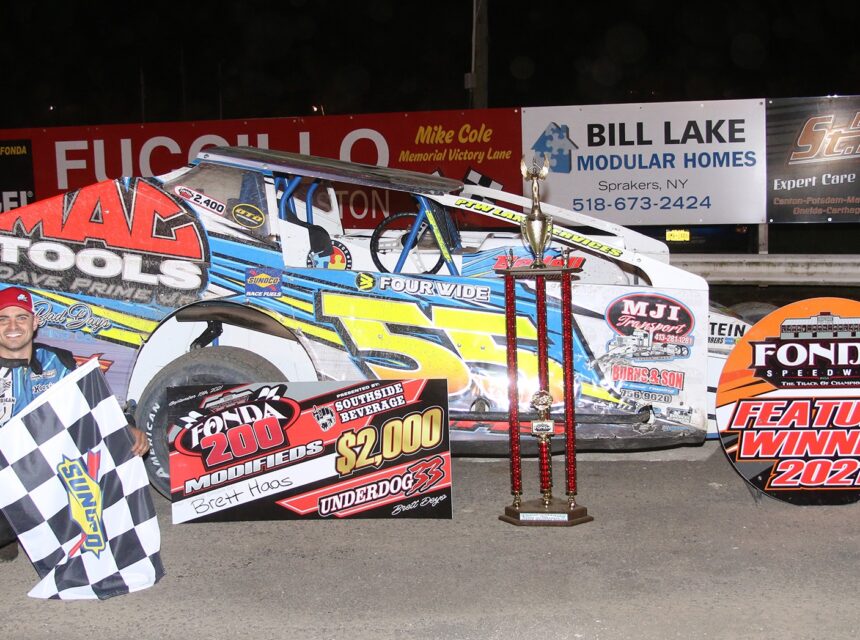 Fonda, NY – Day one of the 2021 Fonda 200 weekend presented by Southside Beverage saw one race run along with three sets of warm-ups for all divisions. When the checkered flag fell it was Pittsfield Massachusetts driver Brett Haas winning not only his first career victory at the Fonda Speedway but also his first win of the entire 2021 racing season in the Mac Tools #55.

A regular competitor at the Lebanon Valley Speedway, Haas finished third in the season long point standings without the benefit of a race win. The “Underdog 33” at Fonda was held with that in mind as it was for competitors from any racetrack who didn’t have a victory during the 2021 racing season.

“I’ve had some awful luck here,” Haas said in victory lane. “But tonight, I had a good draw, and I knew that I had a good car, so I was finally able to get the monkey off my back here at Fonda.”

Fonda Speedway announcer Chris Moore said a prayer to begin opening ceremonies followed by the National Anthem which was performed by Mimi Lazzaro who sang the Anthem up in the announcer’s tower which was a moving experience being there while she sang such a powerful song.

Tucker O’Connor and Haas started the 33-lap feature event on the front row with Haas leading at the drop of Joe Kriss’ green flag. Before any laps were completed, the yellow flag was out for Tucker O’Connor who came to a stop in turn two while running second. O’Connor was able to restart at the rear of the field.

Three more restarts were needed to get the race going again, one of them after Josh Hohenforst jumped the start while the other two involved crashes with drivers Cody Clark and Mark Pullen. When the race finally did get going again after a single file restart, Haas led the way with fourth place starter Josh Hohenforst in second.

Twelfth place starter Craig Hanson moved into the third position on lap three while 21st place starter Tyler Dippel was tenth on lap 10. Hohenforst was on the leader’s rear bumper by lap 14 in lap traffic but when the caution came out two laps later for Dippel who had a flat right rear tire it opened up the track for the leaders. At that point, the top five consisted of Haas, Hohenforst, Phil Vigneri III, Brian Pessolano, and JaMike Sowle.

Hohenforst jumped the next restart and was warned that if it happened again, he would be penalized. When the caution was thrown for the restart infraction by Hohenforst, it bunched up the field on the front stretch resulting in five cars getting together including Dippel who drove away with more damage to his race car. He was able to continue on again and if there was an award given for the amount of cars passed Dippel would have certainly won that award.

Haas built up a straightaway lead on lap 25 only to have the red flag come out for O’Connor who flipped in between turns three and four into the tire wall. O’Connor was not injured in the wreck. On the restart, Hohenforst jumped the start again resulting in getting set back one row into the fourth position on the next restart.

A yellow flag with one lap to go for George Foley who came to a stop in turn four gave everyone one last shot for the win, but Haas got a good restart and went on to the victory over Vigneri III, Pessolano, Sowle, and Pep Corradi.

Fonda 200 weekend 2021 presented by Southside Beverage will continue on day two on Friday with the Algonkin Pro Stocks, Street Stocks, Fonda Fair Four Cylinders, and the CRSA Sprint cars in action along with heat race qualifiers for the Fonda 200. Starting time on Friday will be 6:00 p.m. for hot laps.