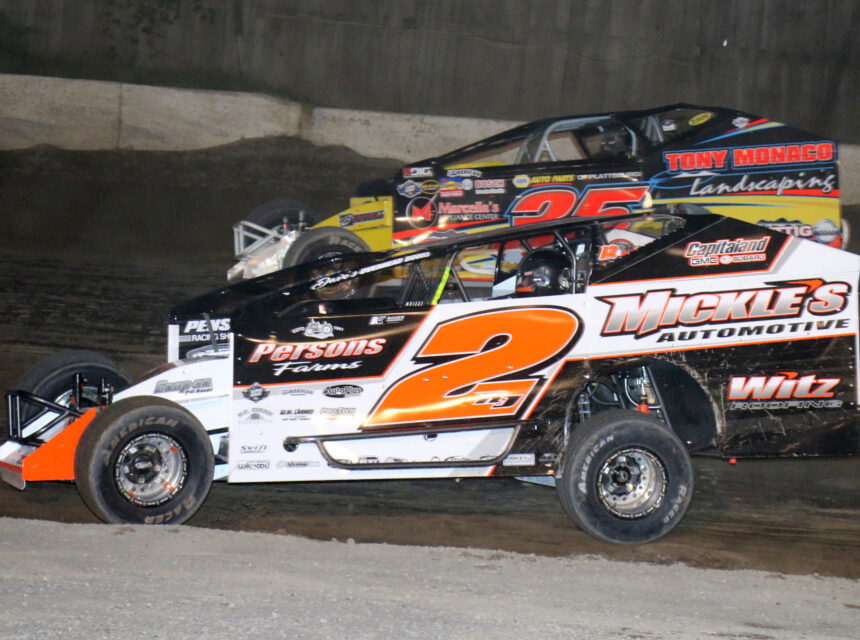 Fonda, NY – It all comes down to this! On Saturday, August 14 a special racing program sponsored by Benjamin Moore will take place at the “Track of Champions” Fonda Speedway called “Championship Night”. After last week’s rainout it will also be “Fan Appreciation Night” as well featuring $5 grandstand admission along with a driver Meet & Greet on the front stretch after hot laps.

Wristbands from last week will be honored for grandstand admission and the pit wristbands from last Saturday will also be honored for admission to the pit area! Where else could you get an exciting racing program in all regular divisions featuring the $2,700 to win Harry Peek Tribute Sunoco Modified feature along with the Mohawk Valley Vintage Dirt Modified Series, a driver meet & greet, championship night when champions in all racing divisions are crowned, plus a 50/50 raffle that is starting out at $1,300 before any racing action begins?

Track Champions will be crowned in all regular divisions this Saturday including the Sunoco Modifieds, the Swagger Factory Apparel Crate 602 Sportsman, the Algonkin Motel Pro Stocks, the Montgomery County Office for Aging Inc. Limited Sportsman, and the Fonda Fair Four Cylinders, both single and dual cam.

The history of the Fonda Speedway makes it a special place to win a Track Championship and it is a prestigious award honoring car owners, sponsors, drivers, and crew members who have worked hard all season long to achieve this goal.

The Mohawk Valley Vintage Dirt Modified Series (MVVDMS) who will also be in action at Fonda this Saturday and they will also crown Track Champions in their organization. Gates will open at 4:00 p.m. with hot laps at 6:00 p.m. and racing at 7:00 p.m.

The Benjamin Moore sponsored #1M of 2011 Fonda Speedway Crate 602 Sportsman Track Champion Mark Mortensen will be on display at gate two from 4:00 p.m. to approximately 5:00 p.m. so people can see the race car up close and meet the driver from Scotia, NY who will be handing out autographed pictures as well!

In addition to the prestige of winning a Track Championship, the Sunoco Modifieds will compete in a 30-lap feature event as a tribute to “The Gentleman” Harry Peek paying $2,700 to the winner and $270 to each qualifying heat race event winner. One previous Harry Peek Tribute event was held at Fonda back in 1999 with Dave Camara the winner of that event.

The Harry Peek tribute event was to be run last Saturday but after rain cancelled last week’s racing program it has been moved to this week with all lap monies and various sponsorships for the special event to be paid out this Saturday, August 14. See a complete list of lap sponsors and other sponsors of the event at the bottom of this press release.

Peek won a total of 23 Late Model features at Fonda in a little over three years and was crowned the Fonda Speedway Late Model Track Champion in 1969. In mid-1970 he moved up to the Modified division at Fonda where he won twenty-one times during his career in eight winning seasons. The first win came in just his second week of racing on 8/15/1970 and it was the prestigious Fonda 200 while his last win came on 4/27/1985.

The Fonda Speedway Kids Club will also be holding their annual “Backpack Giveaway” this Saturday at Fonda so if you would like to donate a backpack filled with school supplies, please see Ashley at the Kids Club which is located at gate two underneath the east end of the covered grandstands. Also don’t forget to sign your kid’s up for the “Backpack Giveaway” for a chance at winning one of those backpacks!

Looking at the point standings in all divisions going into Saturday evening at Fonda, here are the top five in each division and if they have a Track Championship in that division or any other divisions at Fonda in the past it will be noted in parenthesis.