RONNIE JOHNSON WINS 31ST OF HIS CAREER AT FONDA AND FIRST SINCE 8/20/2016 – $21,405 RAISED FOR THE CROSSROADS CENTER FOR CHILDREN FOR AUTISM AWARENESS 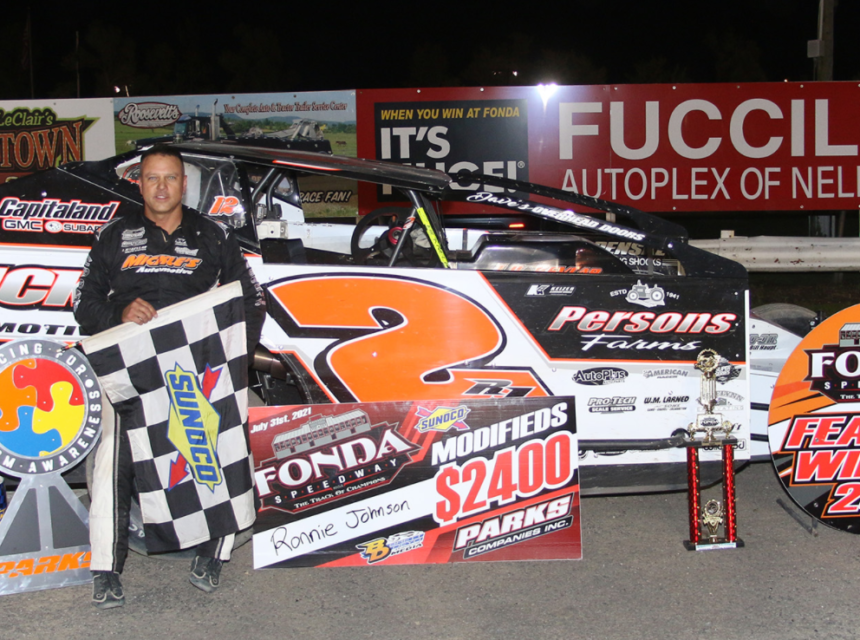 Fonda, NY – Earlier this season Ronnie Johnson competed at the Fonda Speedway on a memorial night honoring his legendary father Jumpin’ Jack Johnson. After that race he decided to “come home” to Fonda and compete on a regular basis at a track where he grew up in the pit area where his father called home as well.

Johnson had a few great runs so far in 2021 but on Saturday it was a brand-new Bicknell car along with a freshened small block motor that proved to be the right combination to get him back to the Fuccillo Autoplex of Nelliston in Memory of Mike Cole victory lane at the “Track of Champions”.

“I feel that I have the best team in dirt track racing,” Johnson told Mimi Lazzaro in victory lane. “There are guys on my team that were with my father on his team before I was even born. There were a lot of late nights spent getting this new car ready this week, we got our small block motor back, dropped it in, and here we are. I have all those guys that have been with me and my father for so long to thank for this win. It feels good to be back home again.”

Thanks to a chicken barbeque, over 100 raffle prizes in the silent auction, the dunk tank, the ice cream truck, the 50/50 raffle, and donations from a number of people and companies the biggest winner of the evening was the Crossroads Center for Children in Schenectady, NY as there was a total of $21,405 donated to the center for Autism Awareness thanks to a huge event put on by Stewart and Jessica Friesen whose son Parker attended the Crossroads Center in the past.

Great sportsmanship by drivers in all divisions along with Fonda Speedway promoter Brett Deyo who all sat in a “dunk tank” to entertain the big crowd that supported the event.

A beautiful rendition of the National Anthem was performed by the lead singer of Flame the Band Michelle King in opening ceremonies while Fonda Speedway announcer Chris Moore said the invocation. Following that starter Joe Kriss threw the green flag in front of a great crowd who witnessed a well-run six division racing program with great racing in all divisions.

Dave Constantino led at the start of the Sunoco Modified feature after starting on the outside of the front row with fourth place starter Mike Mahaney in tow. An early caution was out on lap two for Craig Hanson and Pep Corradi who slowed on the backstretch with flat tires, both were able to go to the hot pit to get the tires changed and rejoin the rear of the field for the restart.

Constantino choose the outside for the restart, but it was Mahaney who got a good run on the inside and took over the lead coming out of turn two. Ronnie Johnson and Rocky Warner were both on the move early after starting ninth and eleventh respectively, getting into the top five by the time lap four had clicked on the lap counter.

Warner was in a brand-new Bicknell car owned by Jake Spraker with a throwback #97 paint scheme from back in the day when Mike Romano used to drive for Spraker. There is a beautiful photo on Facebook of the car from back in the day in front of the enclosed hauler which was painted and lettered to match the race car.

The caution was out on the next lap for point leader Jack Lehner who came to a stop in turn two with Johnson choosing the bottom line for the restart. On the restart, Johnson continued to lead with the top five at the halfway point consisting of Johnson, Mahaney, 14th place starter Stewart Friesen, Warner, and 17th place starter David Schilling.

Johnson was in lap traffic just before the yellow came out again on lap 21 for Brian Calabrese and Adam McAuliffe who both suffered flat tires. Johnson again chose the inside for the restart and held the lead at the drop of the green flag with Warner getting by Mahaney for the second position while Friesen fell back to fourth after contact with Schilling.

One more yellow flag slowed the field on lap 22 with Friesen showing his displeasure to Schilling under caution. On the restart Johnson held the lead and pulled away to a straightaway lead on the way to his first win of the season and the 31st of his career at Fonda in the Mickle’s Automotive #2RJ.

“Prior to that last caution the starter was showing me that I had a good lead,” Johnson said. “But I knew that Rocky was right there and that was a long eight laps to the checkered flag. It’s been a long time since we’ve been here, and I really appreciate all of the fans for their support.”

The 25-lap Swagger Factory Apparel Crate 602 Sportsman feature was one of if not the best feature of the night beginning with Jason Greco the early leader. Mark Mortensen started the event in the seventh position but made some great moves to become the third-place car at the completion of lap one. The yellow was out on lap four for Brett Mortensen who pitted with a flat tire and rejoined the rear of the field with fifth place starter Tanner Warner the new race leader on the restart.

Two more yellow flags slowed the field on laps 18 and 20 and on the final single file restart of the event Mortensen held the number one spot but moved down to the inside to try to protect his lead. That proved to be the wrong move as Warner used the same outside groove in turns three and four to take the lead away from Mortensen with two laps to go, the same place that Mortensen took the lead away from him.

Mortensen ducked under Warner in the turns during the last couple of laps, but Warner used his momentum on the outside to hold on to the number one position on his way to his first career win. Mortensen, Edwards, 17th place starter Tim Hartman Jr., and Calabrese completed the top five.

“This is awesome,” Warner said in victory lane standing next to the O’Connor Towing #3. “We’ve had a fast hot rod for a few weeks now and I’m just trying to do the best that I can. I learned a lot from my father (Rocky Warner) and never thought that I would be competing against some of the best in this division.”

The photo of Tanner, Corky, and Rocky Warner standing on the roof of the car in victory lane celebrating the win said it all about a true racing family that the Warner’s are which was started a long time ago by Rocky’s father and Tanner and Corky’s grandfather Don Warner.

The Algonkin Motel Pro Stock feature was another good one with Steve Cosselman leading at the start followed by Ivan Joslin. After starting the event in the eighth position Luke Horning moved quickly up to the fourth position on lap two and went in between Bill Knapp and Joslin for the second position two laps later. Joslin got up high on the backstretch as a result and spun his car sideways with Josh Coonradt and Scott Towslee piling in afterwards. All were okay but were done for the night.

On the restart, Knapp turned down into Kenny Gates in turn three then went out into the tire wall collecting three other cars in the process including Nick Stone who was the only car that was able to restart at the rear of the field. Cosselman held the lead until lap seven when Horning took it away with a move on the inside of turn two. At the halfway point the top five consisted of Horning, Cosselman, Jason Morrison, Chuck Dumblewski, and Kyle Hoard.

Horning held a straightaway advantage on lap 11 with Stone back up to the third position after getting by Dumblewski and Morrison. With six laps to go Stone took the second position away from Cosselman with the caution coming out on lap 14 to close up the field. Horning chose the inside on the restart with Stone outside of him as the two ran side by side for a couple of laps before Horning was able to clear Stone with two laps to go.

Horning went on to his fourth win of the season and the 25th of his career in the division over Stone, Dumblewski, Cosselman, and Hoard.

With the win Horning moved into a tie for fifth place on the all time win list in the division with 2021 Hall of Fame inductee Phlan Hart.

“I thought that we got a good restart and were running the bottom real well,” the driver of the West End Towing, Catalytic Recovery, LM Mason Contracting sponsored #2H said. “Nick (Stone) showed me the nose and I knew that I had to get to the outside because he runs real well out there. I was able to do that and got the win.”

Lance Hill led the first two laps of the Montgomery County Office for Aging Inc. Limited Sportsman feature until Stephen Gray took over the lead on lap three and led the remaining laps for his second win of the 2021 season and the third of his career in the division over fifth place starter Carter Gibbons, seventh place starter Clayton DuMond, sixth place starter Kyle Dingman, and eighth place starter Jeremy Tyrrell.

Kerrie Hollenback grabbed the lead from his fifth place starting position on lap one of the 12-lap Fonda Fair Four Cylinder feature and led every lap for the overall win in the DOHC class. His brother Ken Hollenback finished third but was awarded the SOHC victory with the top five at the checkered flag consisting of Kerrie Hollenback, Slappy White, Ken Hollenback, John Napoli, and Shwan Hemstreet.

The 20-lap CRSA Sprint feature started with pole position starter Darryl Ruggles leading the first four laps until third place starter Mike Kiser took over the lead on a lap five restart. Jeff Trombley started the event in the ninth position and moved his way up to the second position on lap seven but couldn’t close in on Kiser who took his fourth career win in the division at Fonda over Trombley, Ruggles, Chase Moran, and Josh Flint who won at Fonda in the CRSA event at Fonda earlier this season.

“It was a tough night,” Kiser said in victory lane. “I got here late and missed warm-ups and the track was different than usual. I went to the top on the restart and flat footed it to the end, but I wouldn’t be here right now if it wasn’t for Jeff and Serena Trombley and Warren Alexson, so I thank them for all their help. As a kid I used to come here to Fonda and watch Glen Fitzcharles race his URC Sprint car, I love Fonda Speedway.”

“I’m happy with second,” Trombley said. “Mike (Kiser) worked hard this week and deserved the win; it was a good race, and we had a lot of fun.”

“I’m happy with a third-place finish,” Ruggles said. “Especially when the top two were as fast as they were tonight.”

First career win in the division for Warner at Fonda

Fourth career win in the division for Kiser at Fonda