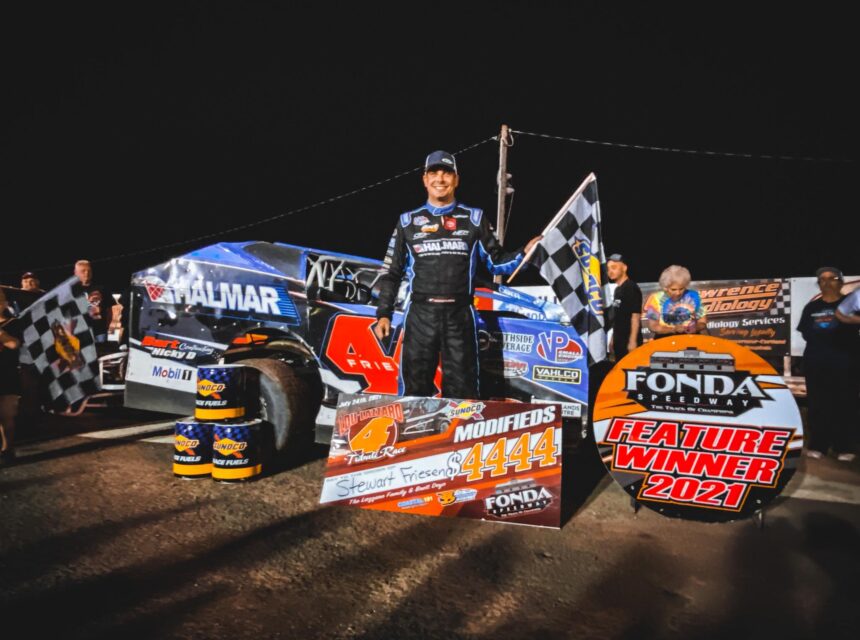 Fonda, NY – How fitting was it on Saturday evening that the #44 of Stewart Friesen and the #4 of Cody Clark were in victory lane after wins at the Fonda Speedway in the Sunoco Modified and Swagger Factory Apparel Crate 602 Sportsman respectively on a night honoring the legendary Lou Lazzaro who drove the iconic #4 during his racing career.

Pacing the field before the 44-lap Lou Lazzaro Memorial feature event was a replica #4 Schwinning car owned by Lazzaro’s son Peter Lazzaro who built the car along with Eric Gall. A sea of maroon could be seen in the grandstands as fans wore their new Lou Lazzaro Memorial t-shirts or other shirts from their personal Lou Lazzaro collection.

A special Dash for Cash was also held called the “Dash 4 Jumpin’ Jack” with Bobby Varin taking the win and $644 in cash!

The Sunoco Modified, Swagger factory Apparel Crate 602 Sportsman, and Algonkin Motel Pro Stock features were all part of the “Thunder on the Thruway Series” between the Fonda and Utica Rome Speedways awarding points not only in the series but regular 2021 Fonda season points as well in all three divisions.

Junior Miss Fonda Fair, Hailie Downing took part in all of the victory lane ceremonies on Saturday night at Fonda.

Special thanks to all the people who sponsored laps and bonuses for the Lou Lazzaro Memorial event along with Stone Motorsports & Online Performance, Mike Jackson of Swagger Factory Apparel, and the Red Chair who sponsored additional bonuses to the other divisions. A complete list of bonuses is available at the end of this press release.

Mimi Lazzaro started opening ceremonies on victory lane and sung the National Anthem on an emotional night honoring her father. Fonda Speedway announcer Chris Moore said the invocation before the first green flag of the night fell to start the festivities.

Special thanks to Todd Cipperly of the Farmers Insurance Cipperly Agency of Central Bridge, NY for the giveaways to the fans at intermission that were tossed from the flaggers stand by Race Director Denny Tillison and head starter Joe Kriss.

The 44-lap Lou Lazzaro Memorial feature event began with a red flag before any laps were completed for point leader Rocky Warner who ended up in the wall in turns one and two after another car made contact with him at the start of the event. Warner was not injured but was done for the evening at that point.

The luck of the draw placed Stewart Friesen on the outside row and he was the race leader at the drop of the green flag to start the event on the restart with Pep Corradi in tow. Mike Mahaney started the event in the fourth position and on lap three got by Corradi for the second spot.

Mahaney cut into Friesen’s lead by a half second on lap six but when he got up too high going into turn one, he made contact with the wall bringing out the caution and ending his night. Twelfth place starter Matt Sheppard was the new second place car on this restart with Josh Hohenforst next in line after getting by both Jessica Friesen and Craig Hanson.

At the halfway point in the event the top five consisted of Stewart Friesen, Sheppard, Hohenforst, Hanson, and Jessica Friesen. The leader was in lap traffic on lap 28 just before the final caution of the event came out closing up the field one last time. On this restart all eyes were on 16th place starter Ronnie Johnson who worked his way up into the top five at this point.

Johnson continued to gain positions to the front, taking the fourth position away from Jessica Friesen on lap 36 and three laps later the third position away from Hohenforst. The leader was in lap traffic over the last four laps of the event, but he safely made his way by each one on the way to his ninth victory of the 2021 season at Fonda and the 77th of his career at the “Track of Champions”.

Sheppard, Johnson, Hohenforst, and Jessica Friesen completed the top five in the event.

On victory lane after the event Stewart Friesen was presented with the Coastal 181 Cup by Lew Boyd as Friesen celebrated the win with his crew and Lou Lazzaro’s family members.

Also, on victory lane Friesen choose a number with the driver finishing in that spot winning $670 in what was called the “Truffle Shuffle”. Position number three was chosen with Johnson taking the additional money. Special thanks to Rob Hazer for sponsoring the “Truffle Shuffle” and for the other drivers participating by donating money towards it.

“We are gonna celebrate this one too,” Friesen told Mimi Lazzaro in victory lane after she started that Friesen had won the Lou Lazzaro Memorial event back in 2014. “This is a special win; it is an honor to win this and to honor Lou Lazzaro and family. Great job by the track crew, they got the water off the track after this week’s rain and gave us something to work with.”

The 25-lap Swagger Factory Apparel Crate 602 Sportsman started out just as the Sunoco Modified feature did with a red flag. Griffen Mansmith flipped his car in between turns one and two but fortunately he was not injured in the wreck. On the original restart the yellow flag was out again before a single file restart finally got the event going on the third try.

Pole position starter Cody Clark took the lead at the drop of the green flag and by lap six held a straightaway advantage. Lap traffic came into play on lap eight, but Clark had a comfortable advantage over the second-place car of Tanner Warner allowing him to have the time to get by the back markers.

Brian Calabrese, Addison Bowman, and Tim Hartman Jr. all took turns getting by Warner for position before the checkered flag fell but it was Clark who went on to his fourth win of the season and the 13th of his career in the division over Calabrese, Bowman, Hartman Jr., and Chad Edwards.

“My buddy drew the pole position start for me tonight but normally the pole isn’t the best place to start,” Clark said after his victory. “Tonight, I tried the outside in turns one and two to get by the lap cars and it worked so I just stayed up there for the rest of the feature.”

Chuck Dumblewski took the lead at the drop of the green flag in the Algonkin Motel Pro Stock event with a red flag slowing the field at the start of the event after Shane Playford got into the wall in turn one. Playford wasn’t injured in the wreck and Dumblewski held the lead again on the restart.

Fifth place starter Kenny Gates was the new second place car on lap four with Nick Stone just behind him in the third position. Stone took the second position away from Gates on lap five and started pressuring Dumblewski for the lead three laps later when Dumblewski was blocked by a couple of lap cars who were racing side by side for position.

Dumblewski was running the perfect groove on the track to keep Stone behind him but that all changed with a caution flag on lap 12. On the restart Stone was the new race leader with seventh place starter Luke Horning the new challenger in the second spot. The color yellow dominated the final laps in the event resulting in a single file restart on lap 16.

The final caution flew with two laps to go but Stone went on to his fifth win of the season and the 58th of his career in the division over Dumblewski, Gates, Horning, and 10th place starter Frank Hoard Jr.

Kerrie Hollenback (DOHC) was the overall winner of the 12-lap Fonda Fair Four Cylinder feature followed by Slappy White, John Napoli, Ken Hollenback (SOHC winner), and Shawn Hemstreet. For Kerrie Hollenback it was his second win of the season and the 19th of his career in the division.

For Ken Hollenback it was his 10th win of the season and the 65th of his career in the division.

Next Saturday, July 31 Parks Companies will present all regular divisions plus the CRSA Sprint Cars. The Pro Stock feature will be American Racer/Lias Tire Super Six Series Event No. 6 paying $1,000 to win!

Ninth win of 2021 and 77th career win in the division for Friesen.

Fourth win of 2021 and the 13th career win in the division for Clark.

Fifth win of 2021 and the 58th career win in the division for Stone.

Third win of 2021 and the third career win in the division for Tyrrell.

Tenth win of 2021 and the 65th career win in the division for Ken Hollenback.

Second win of 2021 and the 19th career win in the division for Kerrie Hollenback.