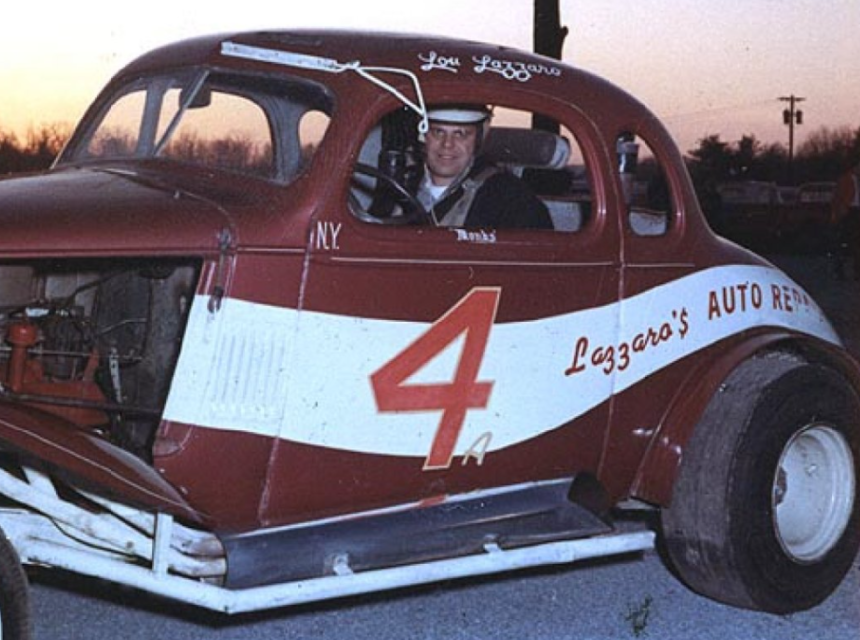 Fonda, NY – This Saturday, July 24 at the “Track of Champions” Fonda Speedway, the “Lou Lazzaro Memorial” will be held honoring the “Incomparable” Lou Lazzaro as Jim King used to call him. Lazzaro was a fan favorite; a four-time track champion at Fonda in 1964, 1969, 1977, 1978; and a winner of 113 feature events during his career at the Montgomery County Fairgrounds half mile facility placing him second on the Modified Division All-Time Win List.

Lou Lazzaro Memorial T-Shirts from Bob Hilbert Sportswear will also be on sale this Saturday at Fonda with an original design by Dan Pilat on the shirt.

The “Thunder on the Thruway Series” events will highlight the racing program including a 44-lap, $4,444-to-win “Lou Lazzaro Memorial” Sunoco Modified feature plus lap money and heat-race money (see the complete list of sponsors and awards elsewhere in this release), the Swagger Factory Apparel Crate 602 Sportsman $1,500 to win event, and the Algonkin Motel Pro Stock $1,000 to win event.

Also on the racing card will be the Montgomery County Office for Aging Inc. Limited Sportsman and the Fonda Fair Four Cylinders with the green flag to start the festivities waving at 7:00 p.m.

One “Thunder on the Thruway” Series event has been held so far in 2021 at both the Fonda and Utica Rome Speedways with Stewart Friesen taking wins at both tracks in the Modified division, Jason Greco (Fonda) and Matt Janczuk (Utica Rome) winning the two Crate 602 Sportsman events, and Nick Stone winning the Pro Stock features at both tracks.

The Fonda Speedway Kid’s Club will be decorated for Christmas for their Christmas in July event this Saturday, July 24. Deb Ward will be making checkered flag stockings that will be filled with goodies by Jann McGaffin. The Fonda Speedway Kid’s Club is located under the covered grandstands at gate two so be sure to have all your children sign up with Ashley Abeling for all the giveaways.

Lou Lazzaro raced his last event at the Fonda Speedway on Saturday, April 29, 2000. He qualified in the consolation and was credited with a 25th place finish after pulling off the track on lap seventeen of the thirty-lap feature. Lazzaro passed away two days later on Monday, May 1, 2000, at the Albany Medical Center succumbing to a stroke.

According to family and friends, Fonda is where Lou wanted to be when he closed his eyes for the final time. This was a perfect final episode to his racing career. He towed his car to the track, qualified, raced the feature, drove his car to the pits, exited the car, took off his helmet and said good-bye to the sport he loved.

In the late sixties Lou Lazzaro was winning so much that the fans in the grandstands constantly booed him. What a difference about thirty years makes.

Since then, racecars have gone from coupes to Gremlin’s and Vega’s, to the current body styles of today. The fans in the grandstands have also changed as they went wild and gave Lazzaro a standing ovation when he won what would be his final feature at Fonda on May 15, 1999.

That was win number 113 which is second on the all time win list at the Track of Champions. And the cheers were deafening every week when Jim King would announce when the “Incomparable Lou Lazzaro” would come out onto the speedway.

The first time Lou ever raced was at a track up near Richfield Springs, NY. His nickname “The Monk” came as a mistake.  “Somebody started calling me “The Monk” and I never corrected him on it, so it has stuck with me ever since,” Lazzaro said.

His car number four came about because there was originally a four-partnership deal in the car. “Before I had even gone racing there was a number four out of the garage that I had started hanging around and when he gave up racing, I took over the number,” he said.

On May 15, 1999, Lazzaro won the modified feature at the Fonda and for him it was a special win, although as he said they are all special and he felt really good about it. “The fans at Fonda are a great bunch of fans and I like winning for them, for my crew, and for myself.”

Winning felt really good to Lazzaro and he didn’t think that it had been that long (June 30, 1994) since he last won a feature at Fonda. “The time went by awful fast,” he said.

Everyone will have different ways of remembering Lou Lazzaro, and the memories will no doubt last forever. And racing at Fonda Speedway has never been the same.

Lou Lazzaro Memorial Night at the Track of Champions featuring the Fuccillo Autoplex of Nelliston Thunder on the Thruway Series Notes!

Thunder on the Thruway Series Sunoco Modifieds – 44 laps, $4,444 to win plus bonuses and awards!

Thunder on the Thruway Series Algonkin Motel Pro Stocks – 20 laps, $1,000 to win plus bonuses and awards!