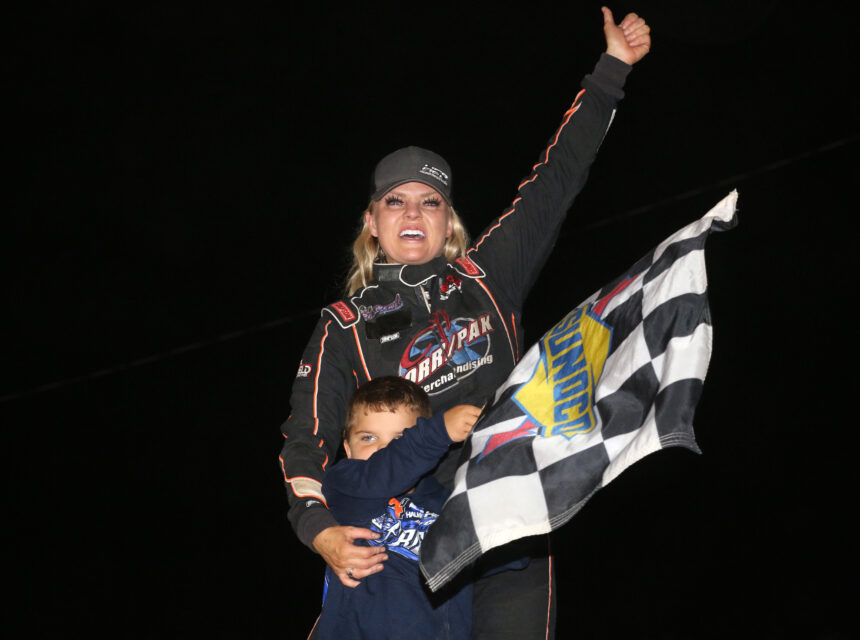 Fonda, NY – Saturday evening at the Fonda Speedway a race to the win in the Sunoco Modified feature became a family affair between Jessica and Stewart Friesen with Jessica beating her husband to the finish line for her first career win in the Sunoco Modified division at Fonda. She now becomes the 136th different winner in a total of 1392 feature events held at the “Track of Champions”.

Earlier this year Jessica captured her first win in a Modified at the Utica Rome Speedway and now has two first career wins in the division at two different speedways in 2021. Jessica does have two wins at Fonda in a 360 Sprint Car, one with the ESS Series and one “Open” 360 Sprint feature event.

Special thanks to Todd Cipperly of the Farmers Insurance Cipperly Agency of Central Bridge, NY for the giveaways to the fans at intermission that were tossed from the flaggers stand by Race Director Denny Tillison and Ed Biittig Sr.

Congratulations to Zachary from Gloversville who was the winner of the 50/50 which was worth $2705 to the winner! Great job 50/50 girls!

David Schilling, Adam McAuliffe, and 12th place starter Stewart Friesen all got by Sowle for positions in the top five by the time lap seven was completed while Jessica Friesen pulled away to a straightaway lead. The first yellow of the event came out on lap nine for Josh Hohenforst who suffered a flat tire and slowed in turn two.

Jessica Friesen chose the inside for the restart with Stewart Friesen moving into the third position behind Varin who was working the outside to try to take the lead away from Jessica. Just before the halfway point in the event, Stewart Friesen took the second position away from Varin who slowed on the front stretch to bring out the caution on lap 13 with something broke in the right rear of his car.

On the restart, Jessica started on the inside but quickly moved to the outside forcing her husband to run the inside groove, a lane he normally doesn’t run at Fonda. Stewart took the lead briefly coming out of turn two but by the time the lap was completed Jessica was still the leader of the event.

At the halfway point, Jessica Friesen, Stewart Friesen, 11th place starter Rocky Warner, McAuliffe, and Schilling completed the top five with the Friesen’s side by side at times on track over the final ten laps racing for the lead. The last few laps Warner was able to close in on the top two and challenged for the second position but when the checkered flag fell it was Jessica taking the win in the One Zee Tees #1Z Bicknell car over Stewart Friesen, Warner, Schilling, and McAuliffe.

“I knew the 44 (Stewart) would be coming,” Fonda’s Fastest Mom told Mimi Lazzaro in victory lane. “I saw him next to me on the restart and I know he loves running the top so I had to get up there as soon as I could. We had a rough night in the truck race last night and to come home to Fonda and get a win is awesome. I don’t know what to say.”

Ricky Quick and Brett Mortensen led the 20-lap Swagger Factory Apparel Crate 602 Sportsman feature to the green flag with Quick taking the early lead. Mortensen used the outside on lap three to take the lead away from Quick just before the first of many cautions came out to slow the event, this caution was for Don Bellen who spun between turns three and four.

Mortensen continued to lead on the restart with two consecutive cautions slowing the event on lap six. Cody Clark started the event in the 12th position and was the new fourth place car on the restart behind Mortensen, Quick, and Brian Borst. On lap 10, Clark got by Quick for the second position and quickly closed in on Mortensen, taking the lead away with a pass on the inside of turns one and two on lap 12.

Brian Calabrese started the event in the 14th position and with the benefits of all the cautions and a fast race car moved into the second position on a lap 13 restart after getting by Mortensen. One lap later, Calabrese took the lead away from Clark on a restart and pulled away from the field.

Tim Dwyer and Tim Hartman Jr. started the event in row number eight and moved into the top five late in the event, but Calabrese went on to his second win of the season and the sixth of his career in the division in the LM Mason Contracting #21C. Clark, Borst, Hartman, and Dwyer completed the top five in the event.

The 16th Annual Hondo Classic started with a four-wide salute on track by the starting field while “Thunderstruck” played over the sound system. Hondo was a very popular driver on track and a friend to many both on and off the track resulting in this race being held in his memory for all these years.

Luke Horning started the event in the 12th position but moved quickly to the front, sitting in the fourth position on lap eight. Horning continued his run to the front on lap 12, getting by both a lap car and Coonradt on the outside of turns one and two for the lead. The yellow was out one lap later with Horning choosing the outside for the restart.

Horning maintained the lead on the restart and at the halfway point in the event the top five consisted of Horning, Coonradt, Gates and Stone. Gates was using a line on the speedway that he isn’t normally accustomed to, the outside line, which was where Stone wanted to race but couldn’t as Gates held him at bay for many laps.

With the leaders in lap traffic on lap 22, Stone finally got by Gates for the third position with one final caution coming out on lap 27 for a two-car spin in turn two. Horning held the lead on the restart and went on to his first victory in the Hondo Classic event over Stone who took the second position away from Coonradt on the final lap, Coonradt, Gates, and Ivan Joslin.

In post-race inspection Coonradt was disqualified for being light at the scales resulting in a third-place finish for Gates followed by Joslin and Ballard in the top five.

After doing donuts on the front stretch, Horning drove the West End Towing & Recovery #2H to the Fuccillo Autoplex of Nelliston in Memory of Mike Cole Victory Lane saying, “What a great turnout, there is no other race like this. Lap traffic got me the lead and I thought that it was gonna cost me the race at one point. Great job by everyone putting this event together.”

“I was running third and fourth for a while and seeing the #35 (Gates) running the top surprised me,” Stone said after his second-place finish.

“We worked on this car in order to be able to run the top,” Gates said after his third-place finish. “We have a way to go with it but we’re getting there. This coil car works good up there.”

John Anderson led lap one in the 15-lap Montgomery County Office for Aging Inc. Limited Sportsman feature until fifth place starter Clayton DuMond took over the lead on the inside of turn two on lap two. DuMond went on to his third win of the season and the third of his career in the division at Fonda over Carter Gibbons, Stephen Gray, Taylor LaPlante, and Kyle Dingman.

John Napoli led the first two laps of the 12-lap Fonda Fair Four Cylinder feature until Ken Hollenback took control of the event on lap three and went on to the overall win in the SOHC class. Slappy White finished second and was declared the DOHC winner with Billy Hillman, Napoli, and John Shepard completing the top five.

Next Saturday, July 17 Bob Hilbert Sportswear and J & J Pristine Detailing will present Fan Appreciation Night with $5 grandstand admission and a pre-race Meet n’ Greet for the fans. All regular divisions will be in action with the Algonkin Motel Pro Stock feature being event #5 in the American Racer Tire/Lias Tire Super Six Series paying $1,000 to win! Racing is set to begin at 7:00 p.m.

First career win in the division at Fonda for Jessica Friesen

Third win of 2021 for Horning, 24th of his career in the division at Fonda, and first win of the Hondo Classic.

Third win of 2021 for DuMond and the third of his career in the division at Fonda.

Eighth win of 2021 for White and the eighth of his career in the division at Fonda.