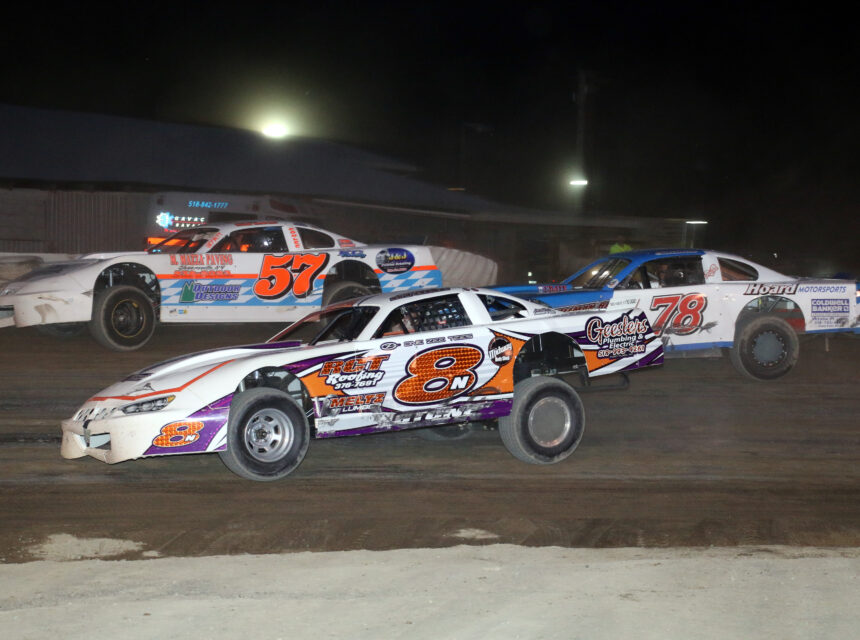 Fonda, NY – On Saturday, July 10 at the “Track of Champions” Fonda Speedway, Sampson Motorcar and Yellow Transportation present a racing card headlined by the 16th Annual “Hondo Classic” for the Algonkin Pro Stocks paying a minimum of $1,000 to win! Racing begins at 7:00 p.m.

The winner of the 16th Annual Hondo Classic will receive $1,199.99 cash!  That includes $800 from the Fonda Speedway purse, $250 from Lightning Pit Lights, Inc. (plus a set of lights), $99.99 from Stone Motorsports, and $50.00 from a friend in memory of Bob James. The winner will also receive a trophy donated by Ed Lamberton, the commemorative Victory Lane sign, the big check designed and donated by Joe Achzet and of course, Magic Hat #9 beer. The winning pit crew will receive $99.99 in Memory of Larry Carpenter, Sr who was on our crew since the very beginning. That bonus is from Friends of Larry Carpenter, Sr.

To keep up with additional bonuses and prizes for the Hondo Classic event you can go to the Friends of Hondo Memorial Society Facebook page.

Also, on the racing card will be the Sunoco Modifieds, the Swagger Factory Apparel Crate 602 Sportsman, the Montgomery County Office for Aging Inc. Limited Sportsman, and the Fonda Fair Four Cylinders.

A huge fireworks display in conjunction with the Village of Fonda will light up the sky.

The infield drive-in area will also be open for the July 10th racing program at Fonda and you can reserve your spot by going to: