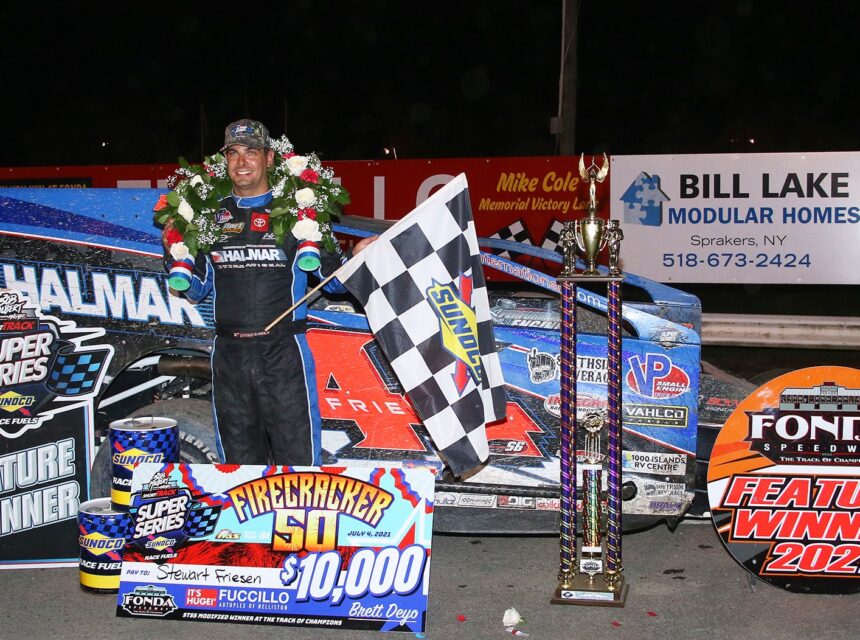 Fonda, NY – What better way to celebrate the Fourth of July holiday than with racing and fireworks? That is exactly how the “Track of Champions” Fonda Speedway celebrated the holiday with the Short Track Super Series in town for STSS Northern Region Modified and Crate 602 Sportsman events. After the final checkered flag flew a gigantic fireworks display lit up the sky as the celebration continued.

Stewart Friesen continued his mastery of the “Track of Champions” winning his eighth feature of the season at Fonda and his third consecutive in the “Firecracker 50” $10,000 to win event. The win now shows Friesen with 76 career victories on the All-Time Modified win list at the Montgomery County Fairgrounds half mile track.

“This is one of the biggest races of the year for us and it is always special to win a race on the Fourth of July,” Friesen told STSS announcer Jeff Ahlum in the Fuccillo Autoplex of Nelliston Mike Cole Memorial Victory Lane. “This win is for Mike Cole who we all miss very much.”

STSS announcer Jeff Ahlum started the evening with a prayer and an invocation followed by a beautiful rendition of both the Canadian and National Anthem’s by Fonda Speedway victory lane announcer Mimi Lazzaro. A great job was also done by Lori Scanlon who signed the anthems to the huge crowd on hand.

Great job by all the 50/50 ticket sellers who raised a total of $6423 for the evenings first prize. Congratulations to Rick from Fort Plain who won the first prize money!

The luck of the draw found Rocky Warner and Matt Sheppard on the front row for the 50-lap “Firecracker 50” with Sheppard taking the lead at the drop of Joe Kriss’ green flag. Sheppard was the only modified without sail panels on his car, but it didn’t seem to matter as he was fast right from hot laps to the feature.

Sheppard bobbled in turn one on lap six as he got into the berm on the inside of the track and shot out towards the wall, barely escaping hitting the wall and continued on with Warner closing in. The first of many yellow flags for flat tires throughout the event flew on lap six for Mike Mahaney who was running third when he had issues. He would pit and restart at the rear of the field.

Sheppard chose the outside for the restart with third place starter Stewart Friesen taking the second position away from Warner while eighth place starter Billy Decker, who was in the third position when the restart occurred, fell back outside of the top 10 when the green flag flew as he nearly got into the wall in turns one and two and lost many positions as a result. One lap later the yellow was out again for Mahaney and Max McLaughlin who both went to the hot pit and restarted at the rear of the field.

Friesen took over the lead on the restart and over the remaining restarts went back and forth between restarting on the inside or the outside. David Schilling and Bobby Hackel IV were running fourth and eighth respectively on lap 14 when they brought out a caution on lap 14 with Decker using all the restarts to advance back to the front as he was back in the third position after a lap 15 restart.

At the halfway point the top five consisted of Friesen, Sheppard, Warner, Decker, and 10th place starter Mike Gular. Friesen put five lap cars in between himself and the second-place car of Sheppard just past the halfway point with Warner able to get by Sheppard in lap traffic on lap 27. Friesen did the same thing that Sheppard had done earlier in the event one lap later as he got into the berm on the inside of turns one and two and shot straight out towards the wall, narrowly escaped hitting the wall and continuing on as Warner tried to close in.

Warner’s luck turned all bad with 20 laps to go as he ended up in the turn four wall after what looked like contact between himself and a lap car. Warner was done for the evening after a great run to that point. Decker continued to advance positions to the front, and with only seven laps remaining in the event was sitting in the second position after getting by Sheppard for the position.

The race stayed green over the remaining laps as Friesen went on to his eighth win of the season and the 76th of his career at Fonda in the Halmar #44 Bicknell car over Decker, Sheppard, 17th place starter Mat Williamson, and Gular.

“The car was great, but the sail panels tighten the car up so much that we were trying to free it up for the feature,” Friesen told STSS Announcer Jeff Ahlum in victory lane. “I was just trying not to spin and blister the tires.”

“The car was really good,” Decker told Mimi Lazzaro in victory lane. “The track was fast tonight and fortunately we brought a race car that felt comfortable. The cautions helped me as I went softer on tires for the feature. I almost took the wall down in turns one and two, but I had a lot of fun tonight.”

“Fonda isn’t like any other tracks that we run, and the track is always different every time we come here,” Sheppard said after his third-place finish. “One day we’ll come here and get the setup right.”

Cody Clark and Mark Mortensen started the 25-lap Crate Sportsman feature on the front row with Clark taking the early lead. Chad Edwards started the event in the sixth position and on lap six was the new fourth place car with the first of three yellows in the event coming out at that point for Troy Palmer who slowed in turn one.

Clark restarted on the outside with Mortensen making a bid for the lead on the inside at the drop of the green flag but as the top two exited turn two Clark pulled away yet again. Edwards was the new third place car on the restart after getting by Will Shields for the spot with another yellow out on lap nine.

At the halfway point the top five consisted of Clark, Mortensen, Edwards, Shields, and 12th place starter Tanner Warner. Just as Mortensen was closing in slightly on the leader, Clark made a great move in between two lap cars in turn four to maintain his lead on lap 18. One final yellow flag slowed the event with three laps to go for Tucker O’Connor and Kurtis Hohensheldt in turn four with O’Connor driving away and Hohensheldt done for the night going off on the hook.

Clark pulled away on the restart with the race for the second position between Mortensen and Edwards heating up overt the last few laps. On the final lap, Edwards made a slide job pass in front of Mortensen in turn two to take away the second position, but Mortensen stayed right with him on the inside until he got airborne after hitting a hole in turn four and settled for the third position.

Clark went on to his third win of the season and the 12th of his career in the division in his #4 DKM car over Edwards, Mortensen, Warner, and 21st place starter Tim Hartman Jr.

“I want to thank all of my fans and sponsors for their support after we ran into some issues a couple of weeks ago,” Clark said in victory lane. “I was getting by lap cars one by one and thanks to DKM for a great race car. This gives us some motivation for next Saturday and the rest of the season as the point battle looks like it will go down to the wire.”

“Typical Fonda,” Edwards said after the race. “You race the competitors and race the track.”

“It is always hard to start on the front row,” Mortensen said after his third-place finish. “I thought the cautions would help but I couldn’t get the exit out of the turns on the inside that I needed, and Cody (Clark) was just fast. I must have slowed down quite a bit at the end and Chad (Edwards) was able to get by me.”

Next Saturday, July 10 Sampson Motor Car and Yellow Transportation will present a racing card in all regular divisions with racing starting at 7:00 p.m. The Pro Stock feature will be the prestigious 16th Annual Hondo Classic named after the late fan favorite Hondo Carpenter.