BIG NIGHT FOR BOTH WARNER AND JOHNSON AT FONDA 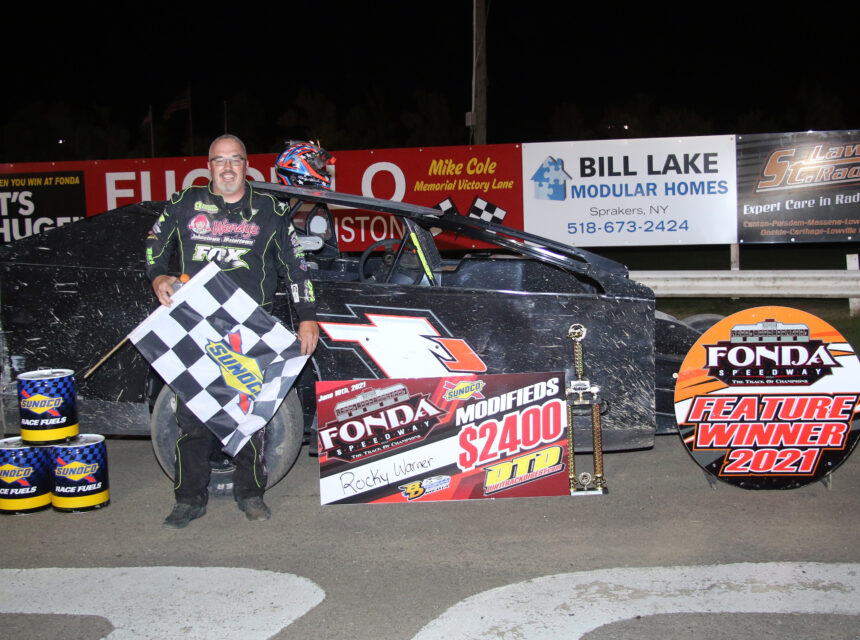 Warner took the lead on lap 22 of the $2,400 to win, 30-lap main event for the Sunoco Modifieds and went on to his second win of the 2021 season and the eighth of his career in the division at Fonda.

Johnson swept every round of the Bill Ag elimination match race event by taking the win in every one of the two lap events over the other five drivers competing in the event compiled of the top five in the point standings after the June 12 racing event. One by one Johnson claimed victories over Craig Hanson, Josh Hohenforst, Mike Mahaney, Jack Lehner, and Rocky Warner to take home the overall win in the event and $5,600 for just ten laps of racing!

“I guess we lost the battle but won the war,” Warner told Mimi Lazzaro in the Fuccillo Autoplex of Nelliston in Memory of Mike Cole victory lane regarding him winning the feature but Ronnie (Johnson) winning the Bill Ag event. It was a good night for our end of the pit area (towards the Cow Palace where both Warner & Johnson pit next to each other).

“What an honor to win this race in Bill’s honor,” Johnson said after the event. “Bill was a great guy, and it shows what he meant to everyone as this event is still being held in his honor and supported by so many people. I found a spot in turn two where I could get a good launch and I knew that if I beat everyone to turn three that I would be okay.”

This event was started by Mike Mallett, George, and GT Smith of Dirt Track Digest many years ago and is still very popular today with all the money being donated to the event along with a lot of extra money towards qualifying events by the many sponsors who support the event. Scott Friers is the organizer of the event and does a great job putting it all together and keeping track of all the different sponsors and money involved.

Mike Mallett was behind the mic on Saturday evening with a special guest appearance by Josh Phillips who was an announcer together with Mallett many years ago at Fonda. As a popular photo that is going around on Facebook says, “it was a reunion/homecoming in the tower tonight with Mimi Lazzaro, Mike Mallet, and Josh Phillips on hand to call the action.” It was also referred to as “getting the band back together” which was also a very appropriate statement as those three shared many Saturday nights in the tower at the Fonda Speedway back in the day.

Mallett started off the evening with a prayer followed by the singing of the National Anthem by Mimi Lazzaro who as always did a great job singing it during pre-race ceremonies.

Congratulations to the winner of the $2,363 in the 50/50 and as always special thanks to Todd Cipperly of the Farmers Insurance Cipperly Agency of Central Bridge, NY for the giveaways to the fans at intermission that were tossed from the flaggers stand by Race Director Denny Tillison and Ed Biittig Sr.

The Sunoco Modified feature began with JaMike Sowle the early race leader at the drop of the green flag from his outside front row starting position with front row starting mate Steve Akers in tow. Adam McAuliffe and Ronnie Johnson both got by Akers for the second and third positions.

Rocky Warner and Jack Lehner completed the top five early on with Sowle in lap traffic by the time lap seven showed on the lap counter. McAuliffe got alongside of Sowle in turn four coming down to complete lap nine and took the lead in the event with Johnson and Warner also getting by Sowle for the second and third positions.

The top three were together in lap traffic racing for the lead with Warner going in between a lap car and Johnson for the second position on lap 14. At the halfway point in the event the top five consisted of McAuliffe, Warner, Johnson, Lehner, and seventh place starter Josh Hohenforst.

Just past the halfway point six lap cars were racing for position right in front of the leader with McAuliffe able to clear at least two of them while Warner and Johnson weren’t as fortunate to get by as quickly allowing McAuliffe to open up a slight advantage on the second and third place cars.

Warner got into the lap car of Robert Bublak forcing Bublak to spin in turn three and bringing out the caution on lap 21. Also involved was Stewart Friesen who got into the tire wall and restarted behind the lead lap cars in the 12th position. On the restart McAuliffe’s great run came to an end as something broke on his car forcing him into the pit area and bringing out the caution one more time.

Warner took over the race lead with two consecutive cautions coming out on lap 22 forcing a single file restart. Eleventh place starter Mike Mahaney moved from sixth to fourth on the restart and with three laps to go also got by Lehner for the third position. Warner led the remaining laps in the Jake Spraker owned #1J Bicknell car with the top five at the finish consisting of Johnson, Friesen, Lehner, and Mahaney.

Congratulations to Steve Akers for his career best finish of eighth in the feature event as well.

“I was leaning on the right rear pretty hard,” Warner said after the win. “I thought that we were a sitting duck tonight with the small block especially after the rain came through and changed the track. I got a little over aggressive with a lap car tonight but all I could see was a possible win going away.”

The 25-lap Swagger factory Apparel Crate 602 Sportsman feature began with William August as the early leader with third place starter Jason Reome in tow. The red flag was out on lap eight for a multi car crash in turn four, no drivers were injured but there were many banged up racecars.

Clark used the outside groove in turn four to take over the race lead on lap nine and five laps later was a straightaway ahead of Mortensen who had just taken the second spot away from Tanner Warner. Griffen Mansmith brought out the final caution flag in the event with five laps to go giving drivers one final chance to defeat Clark.

Clark pulled away on the single file restart while Mortensen and Warner were waging a great battle for the second position. Clark went on to his second win of the season and the 11th of his career in the division in back-to-back fashion over Warner who took the second position away from Mortensen on the final lap. Mortensen, Aaron Burton, and 20th place starter Chad Edwards completed the top five in the event.

“We are definitely starting to get this DKM car figured out,” Clark said in victory lane. “We were good in our heat race starting seventh and finishing third so that gave me a lot of confidence for the feature.”

As is the case on a weekly basis the Algonkin Motel Pro Stock feature was one of the best of the evening with Gary Silkey the early race leader at the drop of Joe Kriss’ green flag. Jim Normoyle started second but dropped back early and had to regroup which he did quickly by taking the second position from Chuck McSpirit on lap two.

On the outside of the front stretch coming down to complete lap three, Normoyle took the lead away from Silkey just before the yellow flag came out for the first time in the event. Fifth place starter Jason Morrison was the second-place car on the restart, but Silkey took that spot back when the green flag dropped. Tenth place starter Kenny Gates was the new fifth place car on lap six with Chuck Dumblewski in between Gates and Morrison in the fourth position.

At the halfway point Normoyle maintained the lead, using the extreme outside groove in turns one and two on every circuit followed by Silkey, Gates, Morrison, and Dumblewski. Twelfth place starter Nick Stone began to show his hand at the halfway point as well, sitting in the sixth position when the caution came out on lap 11 for Steve and Randy Cosselman who wrecked in turn four. Both drivers were okay after the wreck.

Gates got by Silkey for the second position on the restart with Normoyle still showing the way with one more caution out with three laps to go. On the single file restart Normoyle, Gates, and Stone were three wide for the lead with Normoyle somehow maintaining the top spot coming out of turn four with one lap to go.

Normoyle went on to the win, his first win since August 12, 2017 over Stone, Gates, eighth place starter Ivan Joslin, and Dumblewski. For Normoyle it was his eighth career win in the division at Fonda.

“It’s been quite a while since I’ve been here in victory lane at Fonda,” Normoyle told Mimi Lazzaro in victory lane after his win. “Gotta watch the #8N (Nick Stone) he is a little sneaky and real fast. I almost got crossed up and backed it into the wall in turns one and two running the outside like I was, but I got it straightened out and nobody was around me, so I kept it right up there.”

Carter Gibbons took the lead in the Montgomery County Office for Aging Inc. Limited Sportsman feature with only two laps to go in the 15-lap event and went on to his second win of the season and the second of his career in the division at Fonda over John Young, Jonathan Feagles, sixth place starter Taylor LaPlante, and eighth place starter Clayton DuMond.

Next Saturday June 26 at the Fonda Speedway A-Verdi Storage Containers will sponsor a racing program consisting of all regular divisions along with the A-Verdi Patriot Sprint Tour (PST) 360 Sprint cars. The Algonkin Pro Stock feature will be race number four in the American Racer/Lias Tire Super Six Series paying $1,000 to win! Starting time will be 7:00 p.m.

First win of 2021 and the eighth career win in the division for Normoyle.

Ronnie Johnson defeated Rocky Warner for the overall win and a total of $5600 for just ten laps.