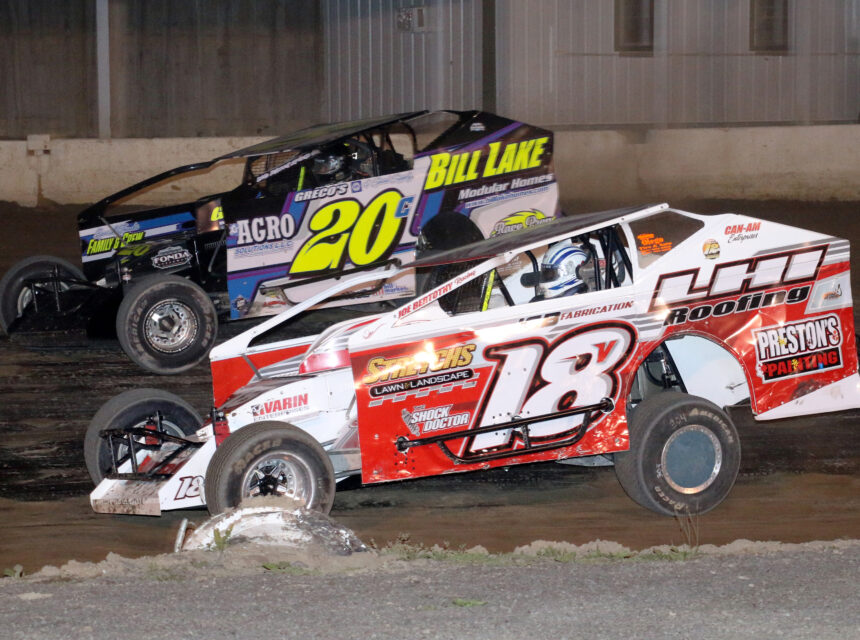 Fonda, NY – This Saturday June 19 at the “Track of Champions” Fonda Speedway a special night honoring the late Bill Anagnostopulos will take place as the current top five in Sunoco Modified points will compete in the Bill Ag One-On-One Match Races with a lot of money on the line from various sponsors going to the drivers competing in the event.

This event is held in honor of the late Bill Anagnostopulos who was the owner of the Winners Circle, which is a restaurant in Fonda, NY that is located just around the corner from the Fonda Speedway. Bill was a great friend to racing and sponsored many drivers at the speedway through the years. On a typical Saturday evening, he would get away from the restaurant to attend the races at Fonda where he had many friends in both the pit area and the grandstands.

“It’s an honor for us at DTD to be involved with the annual “Bill Ag Elimination Race” at the Fonda Speedway each year,” a representative for the event recently said.

Typically, the one-on-one elimination race features the top five in Modified points plus a random driver selected from points positions 6-10.

Since there is a tie in the Sunoco Modified points top five, there will be no “Random Draw” for this year’s elimination event, so the drivers who will be competing in the Bill Ag One-On-One Match Races are Josh Hohenforst, Craig Hanson, Jack Lehner, Rocky Warner, Ronnie Johnson, and last week’s winner Mike Mahaney. Johnson and Mahaney are currently tied for the fifth position in the point standings following the June 12 racing program.

Should one of these drivers sweep all five rounds of this event, he will be walking away with in excess of $4,000 for just ten laps of racing! Dirt Track Digest and all the organizers of this event wish to say a special thank you to ALL the sponsors who have donated to the event now, and over the years as it has certainly become a “must see” event.

Some quotes from the previous winners of the event:

“This is a very special event honoring Bill from the Winners Circle,” Friesen said in the Fuccillo Automotive Group Mike Cole Victory Lane after his win in 2019. “This is a cool mid-summer special race that has become a big event so thanks to all the sponsors and the organizers for their efforts.”

“When Josh (Hohenforst) got lane choice for the last race I thought that I was in trouble,” Fuller said after his win in 2018. “I was real concerned because he is fast here at Fonda on a heavy track. This event is a little different, it has a lot of pizzazz, and racing needs more of that.”

All regular divisions will also be in action on Saturday, June 19 including the Swagger Factory Apparel Crate 602 Sportsman, the Algonkin Motel Pro Stocks, the Montgomery County Office for Aging Limited Sportsman, and the Fonda Fair Four Cylinders. Starting time will be 7:00 p.m.

The infield Drive-In area will be open on Saturday, June 19 for the “Dirt Track Digest Night – Bill Ag Memorial One-On-One Match Races” along with all regular divisions and you can reserve your spot on the infield by going to the Drive-In reservation request: https://docs.google.com/…/1FAIpQLSeeT6Vnd40XrI…/viewform