MAHANEY WINS SECOND OF THE SEASON AT FONDA 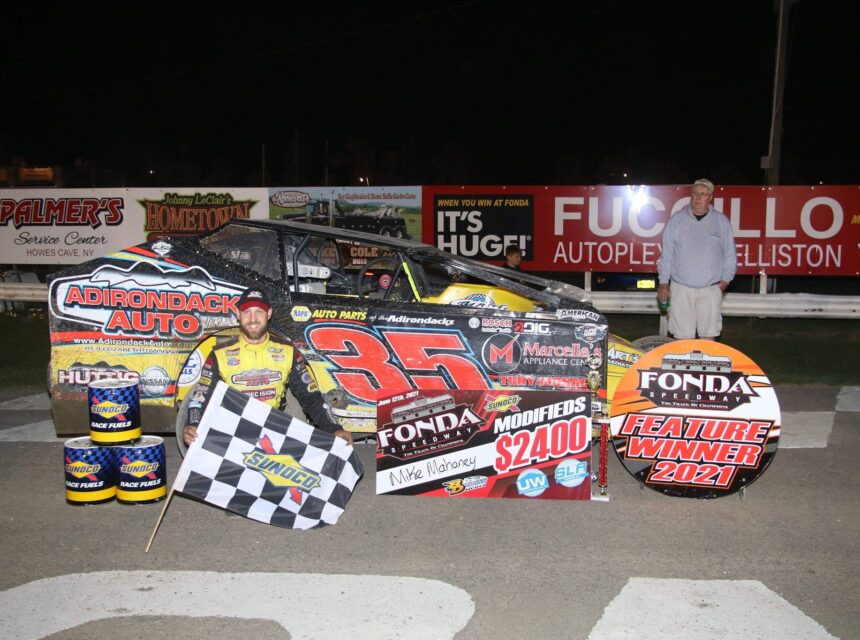 Fonda, NY – Two weeks ago during the Twin 22 lap events at Fonda, Mike Mahaney was involved in a wreck that demolished his Adirondack Auto #35. On Saturday evening at the “Track of Champions” Fonda Speedway he used the repaired race car to win his second feature of the season and the fifth of his career at the Montgomery County Fairgrounds facility.

“A couple of weeks ago this car was demolished here at Fonda,” Mahaney said in the Fuccillo Autoplex of Nelliston Mike Cole Memorial victory lane. “Thanks to my crew and everyone who helped get it back together”.

Special Thanks to LM Mason Contraction for the $300 bonus to the winner of the Swagger Factory Apparel Crate 602 Sportsman feature along with the $100 bonus to the second and third place finishers. LM Mason Contracting is a sponsor on many of the race cars at the Fonda Speedway and we appreciate the support of both your sponsored drivers and the Fonda Speedway as well.

Special thanks also goes out to Todd Cipperly of the Farmers Insurance Cipperly Agency of Central Bridge, NY for the giveaways to the fans at intermission that were tossed from the flaggers stand by Race Director Denny Tillison and Ed Biittig Sr.

Congratulations to Mike from Broadalbin, NY who was the winner of the 50/50 which was worth $2099!

Chris Moore did the invocation followed by a beautiful singing of the National Anthem by Stephanie May.

The 30-lap Sunoco Modified feature began with JaMike Sowle and George Foley on the front row with Sowle taking the early lead. Mike Mahaney started the event on the outside of the second row in the fourth position but quickly moved into the second position at the completion of lap one after getting by Foley.

Ronnie Johnson and Adam McAuliffe also got by Foley for position while Mahaney closed in on Sowle for the lead. On lap five something broke on the right rear suspension of Sowle’s racecar dropping the right rear of the car and bringing out the caution flag with Mahaney taking over the lead.

The yellow was out again on the restart for McAuliffe who broke going down the backstretch with a single file restart ensuing because of two consecutive yellow flags with no laps completed.

As Mahaney continued to lead at the drop of the green flag, eighth place starter Craig Hanson was making his way to the front, going from fifth to third on the restart. Foley was one of the cars that Hanson passed but on the next lap Foley found the outside groove to his liking getting by both Hanson and Johnson for the second spot. At the halfway point in the event Mahaney was the race leader followed by Foley, Johnson, Hanson, and 11th place starter Rocky Warner.

Hanson got by Johnson on lap 19 for the third position and three laps later used a slide job pass in turn two to get by Foley for the second position. With five laps to go Hanson was closing in on Mahaney for the lead but couldn’t find a way by, trying both the inside and the outside grooves to get the job done.

At the drop of the checkered flag Mahaney went on to his second win of the season in the Adirondack Auto, George Huttig owned #35 followed by Hanson, Warner, Johnson, and Foley.

“This is way better winning two races instead of one in the same season,” Mahaney told Mimi Lazzaro in victory lane. “The top was the fast way around the track tonight, I had some practice last week on the outside on the slick track getting closer to the wall and tonight I had more practice doing it, but I’ve still got some room to go out further.”

“My car was good on the top but that was where the 35 (Mahaney) was running,” Hanson said in victory lane as he received the NYSSCA award for finishing second as a member of the organization. “I tried something different going to the inside but maybe I should have stayed on the outside on Mike’s rear bumper in the closing laps.”

The 25-lap Swagger Factory Apparel Crate 602 Sportsman feature was a lead swapping affair between four drivers with six lead changes deciding the feature winner. It all began with Brett Mortensen the early race leader from his pole position start while Brendan Gibbons started on the outside pole and kept Mortensen in his sights. On lap two, Gibbons took over the lead with a pass on the inside of turn three, but Mortensen never let Gibbons get away and took the lead back on lap four.

Clark made a three wide move to get by both a lap car and Bowman for the lead on lap 18 but it only lasted for one lap as Bowman took the lead back on lap 19. A lap car came into play again on lap 21 when the leader Bowman was blocked by a lap car allowing Clark to get by for the lead and the win, his first win of the 2021 season and the 10th of his career at Fonda in the Upstate Motorsports #4 DKM.

“The last few weeks I finished second but just couldn’t get the job done,” Clark said in victory lane. “Tonight, I was able to get the win, and this is definitely a confidence booster for me.”

Event number three in the American Racer/Lias Tire Super Six Series paying $1,000 to win for the Algonkin Pro Stocks was another lead changing event with three lead changes among four different drivers starting with Shane Playford who led from his pole position start at the drop of the green flag.

Playford held the top spot until lap four when Jim Normoyle took over the race lead while outside pole position starter Kyle Hoard was close behind Playford in third. Hoard made a move from third to first on lap six to take over the lead in the event while 10th place starter Luke Horning and 12th place starter Nick Stone made their way to the front.

Horning took the lead away from Hoard on lap eight with a move on the inside of turn two with Stone also getting by Hoard four laps later for the second spot. The race stayed green the rest of the way and Horning was never seriously challenged as he went on to his second win of the season and the 23rd of his career in the division in the West End Towing & Repair #2H.

“I wanted to run the top, but I was trying to give it enough time to come in before going up there,” Horning said in victory lane. “Once I got up there, I just kept it to the floor after that.”

Jonathan Feagles led the first two laps in the Montgomery County Office for Aging Inc. Limited Sportsman feature while third place starter Taylor LaPlante was in the second position by lap two. One lap later LaPlante took the lead away from Feagles and led the remaining laps for his second win of the 2021 season and the second of his career at Fonda in the gCrete 3D Printers & Printing #33.

Slappy White led the final 10 laps in the Fonda Fair Four Cylinder feature to take the overall win in the DOHC category. Ken Hollenback was the SOHC winner but was disqualified in post-race inspection handing the SOHC win to Wayne Russell Jr. For White it was his fifth win of the 2021 season and fifth of his career at Fonda while for Russell Jr. it was his second win of the 2021 season and the third of his career at Fonda.

Next week at Fonda will be Dirt Track Digest (DTD) Night with all divisions in action along with the Bill Ag Memorial One on One Match Races for the top five in Sunoco Modified points. Starting time will be 7:00 p.m.