12th TO FIRST FOR BOTH FRIESEN AND MORTENSEN AT FONDA 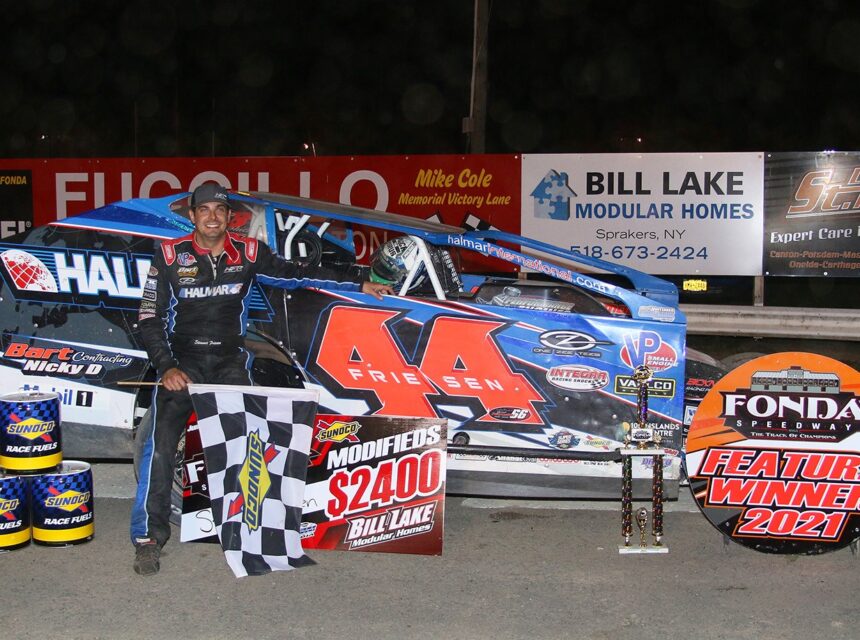 Fonda, NY – 12th must have been the place to be at the start of the Sunoco Modified and Swagger Factory Apparel Crate 602 Sportsman feature events at the “Track of Champions” Fonda Speedway on Saturday evening as both Stewart Friesen and Mark Mortensen took the feature wins in their respective divisions after starting from the twelfth position.

For Friesen it was his sixth win of the 2021 season at Fonda and the 74th of his career in the Sunoco Modified division as he currently sits fourth on the All-Time Win List in some very good company as the top three on the list are Jack Johnson with 149, Lou Lazzaro with 113, and Dave Lape with 99.

For Mortensen it was his first win of the 2021 season and the 24th of his career in the Swagger Factory Apparel Crate 602 Sportsman division where he currently sits second on the All-Time Win List behind some good company as well with Rocky Warner top on the list with 25 victories.

Congratulations to Lynn from Schenectady who was the winner of $2,373 in the 50/50 and special thanks to Todd Cipperly of the Farmers Insurance Cipperly Agency of Central Bridge, NY for the giveaways to the fans at intermission that were tossed from the flaggers stand by Race Director Denny Tillison and Ed Biittig Sr.

Madeline Downing performed a beautiful rendition of the National Anthem to start the racing program after the invocation given by Fonda Speedway announcer Chris Moore. Downing is a 2021 graduate of Northville Central School, graduating as Valedictorian.

Joe Kriss dropped the green flag on the front row of Brian Pessolano and George Foley with Foley the early race leader with fourth place starter Bobby Varin in second. Friesen started the event in the 12th position but by lap two he was already up to fifth. Using the outside groove or the “Stew Lane” as announcer Chris Moore referred to, Friesen moved up to the second position on lap three with a great move to get by Rocky Warner, Ronnie Johnson, and Varin.

One lap later on the outside of the backstretch, Friesen got by Foley for the lead, which he would never relinquish, at times holding a half track lead over his nearest competitor. Johnson took over the second position from Foley at the halfway point as Friesen continued to set a blistering pace in the lead with Warner, and Adam McAuliffe completing the top five.

The big lead that Friesen had built up was taken away on lap 19 when Pep Corradi slowed in turn two to bring out the caution with McAuliffe also forced to the pits while running fifth. Warner was the new second place car on the restart, with 11th place starter Mike Mahaney racing into the top five at that point.

One more yellow slowed the field with five laps to go when McAuliffe who restarted the race at the rear of the field on lap 19 spun in turn two while running 10th. Ninth place starter Craig Hanson made his way up to the fourth position by that point and while Friesen pulled away to yet another win the race between Hanson and Mahaney for fourth was the best race on the track.

At the checkered flag Friesen was the winner in the Halmar #44 Bicknell car followed in the top five by Warner, Johnson, Mahaney, and Hanson.

“I saw them putting water on the top of the track during intermission and we worked on setting the car up in order to get hooked up to the track,” Friesen told Mimi Lazzaro in the Fuccillo Autoplex of Nelliston in Memory of Mike Cole Victory Lane. “I was living on the top and I am really fortunate to have Fonda Speedway in my back yard, I love racing here.”

Jason Greco and Brett Mortensen started the 25-lap Swagger Factory Apparel Crate 602 Sportsman feature on the front row with Greco taking the early lead. While Brett Mortensen was running a great race in the second position, his brother Mark Mortensen was using the same line around the speedway to get to the front after starting 12th, sitting in the sixth position by lap seven.

Greco was in lap traffic by lap 11 with Mark Mortensen continuing his march to the front, sitting in the third position by lap 16. One lap later the only yellow of the event was out for the lap car of Griffen Mansmith and Brett Mortensen who was collected when Mansmith tried to get off the track into the pit area and turned right in front of the field. Mark Mortensen was almost collected by the wreck as well but narrowly escaped by getting around the outside of both cars. Mansmith and Brett Mortensen were both done for the night at that point.

On the restart, Greco led through turn two until Mark Mortensen got a run on the outside to take over the lead by the time, they got to turn three on lap 18. Ninth place starter Cody Clark made a great move on the restart to get by Tony Farone and Chip Constantino into the third position and with three laps to go also got by Greco for the second position.

“It’s been a crazy season,” Mortensen said in victory lane. “I’ve probably got the best car I’ve ever had, and I can’t screw that up so I’m pressuring myself to do better. Now I got the monkey off my back.”

Andy Graves led the first two laps in the Algonkin Pro Stock feature with eighth place starter and defending track champion Nick Stone up to second at the completion of lap two. Stone was utilizing the outside groove just as Friesen and Mortensen were and quickly moved in on Graves for the lead which he took over on lap three.

Another car on the move was 12th place starter Luke Horning who was second on lap four with Jason Morrison now third after also getting by Graves. On lap nine Horning was forced to the pit area with a flat tire possibly caused by a scrape to the wall in turn one as Horning was running way outside like Stone was. Horning replaced the flat tire and restarted in the 19th spot.

Another driver on the move was 10th place starter Josh Coonradt who was the new second place car on lap 10 after getting by Morrison. At the halfway point the top five consisted of Stone, Coonradt, Morrison, last weeks winner Kenny Gates who started 11th, and Graves.

As Stone pulled away to a big lead the driver to watch was Horning who quickly made his way back to the front after restarting in 19th on lap nine, as he was in the top five on lap 13. With three laps to go Horning got by Coonradt for the second position with the checkered flag flying over Stone who took his third win of the season and the 56th of his career in the division over Horning, Coonradt, Gates, and Morrison.

“There was a nice groove on the outside, but nobody was going up there to use it,” Stone said in victory lane. “So, I went up there and stayed there for the entire race. This car is owned by Todd Hoffman and his crew maintains it, I go to his shop to scale it on Saturday mornings and the car is always flawless and ready to race when I get there. My crew maintains my car and running two cars with double crews takes a lot of pressure off me.”

A childhood dream was realized in the CRSA Sprint car feature when Josh Flint took the victory for his first career win in any division at the Fonda Speedway. Flint started on the pole after winning his qualifying heat race, but it was by no means an easy win for Flint as he had to hold off a hard charging Jeff Trombley for the win.

Flint took the lead at the drop of the green flag with Chase Moran in second. Trombley and Mike Kiser made there way to the front after starting together in row four with Trombley in the third position by lap four while Kiser broke into the top five. Trombley and Kiser both got by Moran for the second and third positions on lap 11 with Flint now in lap traffic.

One caution flag slowed the field on lap 12 and on the restart, Kiser got by Trombley for the second position, but by the time the lap was completed Trombley had taken the spot back from Kiser. Trombley put constant pressure on Flint over the remaining laps, but Flint drove a great race to take the win followed in the top five by Trombley, Kiser, Moran, and JR Hurlburt.

“I earned that one,” Flint told good friend Mimi Lazzaro in victory lane. “Jeff (Trombley) was right there, and he is someone I respect and was happy to race with for this win. “I grew up here at Fonda, my grandfather used to bring me here as a kid to watch my father (Russ Flint) race. I was once asked if I were able to get a series championship or a win at Fonda which would I prefer. I definitely chose to win at Fonda.”

A little history about Josh’s father Russ Flint, he was the 320-Modified Track Champion at Fonda back in 1987 with one career win in that division. Russ was in victory lane with Josh on Saturday evening to celebrate his win saying, “there is nothing better than a win at Fonda, this is such a family sport.” Russ builds the motors that his son Josh uses in his Sprint car making it all even more special!

On a side not Russ Flint also found out on Saturday evening that he will be inducted into the Fonda Speedway Hall of Fame this year during ceremonies which will be held at the Fonda Speedway Museum later this year. Josh Flint has said that he was going to retire at the end of the 2021 season so will this win at Fonda change his mind? We will all have to wait to find out.

Kerrie Hollenback led the final 10 laps in the 12-lap Fonda Fair Four Cylinder feature, taking the overall win in the event as a DOHC. John Napoli finished second overall with the first SOHC car finishing third with Kerrie’s brother Ken Hollenback getting the win as a SOHC. Slappy White and Tyler White completed the top five.

Next week June 12 at the Fonda Speedway, School House Pools Night presents all regular divisions in action along with the Mohawk Valley Vintage Dirt Modifieds. The Algonkin Pro Stocks will compete in the American Racer/Lias Tire Super Six Series Event No. 3 paying $1,000 to win.

It will also be New York State Stock Car Association Night (NYSSCA) Night next Saturday with monetary awards handed out by the organization for the top two finishers in each division who are NYSSCA members. Starting time will be 7:00 p.m.

1st win of 2021 for Mortensen and the 24th of his career in the division at Fonda.

1st win of 2021 for Kerrie Hollenback and the 18th of his career in the division at Fonda.

1st career win in the division at Fonda