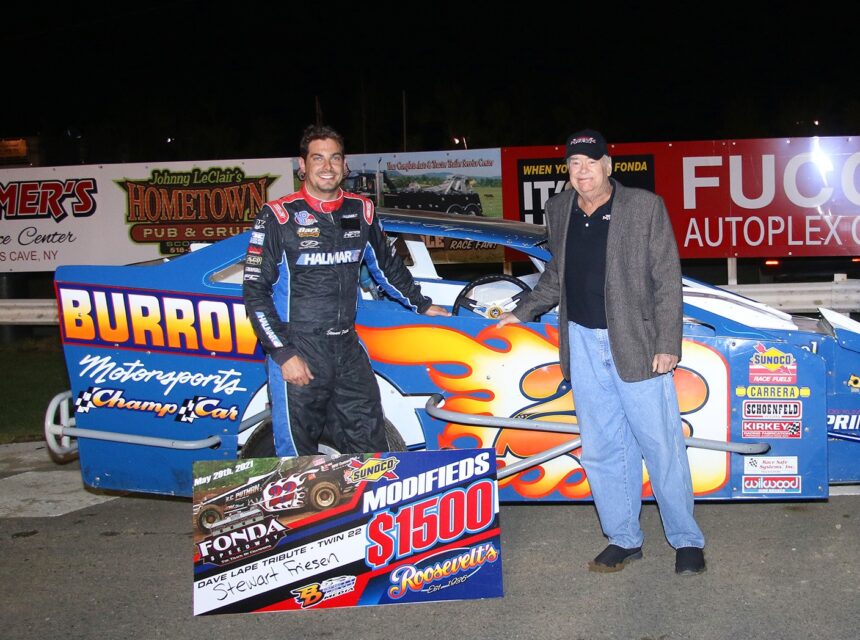 Fonda, NY – Every race night at the “Track of Champions” Fonda Speedway is special. It means so much to win there, to even race there. Saturday evening was even more special as one of the legendary drivers at the speedway was honored with a special tribute night. As the winner of both Twin 22 lap Sunoco Modified features said in victory lane “the track was challenging tonight, it had some character.”

Dave Lape Tribute Night started out on Saturday afternoon at the Fonda Speedway Hall of Fame & Museum when a special ceremony was held to honor the driver from Canajoharie, NY. A whose who list of people were on hand to honor Lape including the founder of DIRT Motorsports Glenn Donnelly who came all the way to Fonda from his home in Florida, Shane Andrews, Lew Boyd, Dick Berggren, Adam Fusco who is the son of Lape’s great friend the late Andy Fusco, Matt Noles, many of Lape’s former crew members, business partners, and friends.

When the final checkered flag flew, Sprakers, NY driver Stewart Friesen continued his dominance at Fonda with wins in both feature events which were worth $1,722 to win each one thanks to a $220 bonus for both events from one of Lape’s business partners back in the day of Champ Car, Jim Senzio of Fulton County Electrical & Electronics. The wins for Friesen were the 72nd and 73rd of his career at the “Track of Champions”.

Senzio of Fulton County Electrical & Electronics also sponsored a $100 bonus for the 10th place finisher in both Sunoco Modified feature events along with a $122 bonus to each of the winners in the Swagger Factory Apparel Crate 602 Sportsman and Montgomery County Office for Aging Inc. Limited Sportsman features plus a $50 bonus to the 10th place finishers in both of those feature events.

The bonuses continued this special night in each of the Sunoco Modified heat race events as Hazer’s World donated $122 to each of the winners.

In victory lane after the first of two Twin 22-lap features Friesen was surprised when Lape along with his wife Jackie and daughter Jessica joined him in victory lane to celebrate his win. “That was pretty wild,” Friesen said in the Fuccillo Autoplex of Nelliston Mike Cole Memorial Victory Lane after the win. “Dave Lape is one of my hero’s and my friend, he used to come to Ransomville to race back when my family owned the speedway.”

“I was actually hoping for a rerack a little sooner,” Friesen continued to say after taking the lead after a restart on lap 15. “I loosened it up for this feature and found the outside but for the second feature we’re gonna have to tighten it up.”

The evenings sponsor M.W. Roosevelt & Son/Roosevelt’s Towing & Recovery was a sponsor on Dave Lape’s race cars from the beginning of his career right until up until the end.

Sara Porter from Cobleskill, NY sang the National Anthem as the Fonda Speedway celebrated Memorial Day weekend and congratulations to the winner of the 50/50 which was worth $2,388!

The first 22-lap event which was led in the parade lap by one of Dave Lape’s former race cars was led by pole position starter David Schilling at the start with the red flag out shortly after lap one was completed for Steve Akers who got up and over in turn one with other cars also piling in. Nobody was injured in the wreck.

The field was slowed again by a caution on the second lap with Schilling continuing to lead when the race restarted with fifth place starter Jack Lehner the new second place car on lap four. Schilling led at the halfway point in the event followed in the top five Lehner, Josh Hohenforst, 12th place starter Stewart Friesen, and Jessica Friesen.

When JaMike Sowle slowed in between turns three and four on lap 13 it brought out the caution and, on the restart, Stewart Friesen was able to get by both Hohenforst and Lehner for the second spot. One lap later Stewart Friesen went by Schilling on the outside like he was standing still and led the remaining laps for the victory over Lehner, Schilling, Hohenforst, and 11th place starter Bobby Varin.

An invert of four saw Hohenforst and Schilling on the front row for the second Sunoco Modified 22-lap event with Schilling leading at the drop of the green flag. By lap four, fourth place starter Stewart Friesen got by both Hohenforst and Lehner for the second position with the yellow out on lap 11 for Bobby Varin after something broke in the left rear of his racecar.

Schilling chose the inside for the restart with Stewart Friesen on the outside and going into turn four to the start, Schilling pushed Friesen out towards the wall and held the lead going into turn one while Friesen dropped to third. Exiting turn two Friesen made a three-wide move by both Hohenforst and Schilling to take the lead and led the remaining laps for yet another victory. Lehner, 28th place starter Rocky Warner, Hohenforst, and Schilling completed the top five.

“I couldn’t catch the 20 (Schilling), he was running the same line as I was,” Stewart Friesen said in victory lane. “I think he over thought the restart, ran me up to the wall, and I’ll remember that for the next time.”

The Mortensen brothers Brett and Mark started the 25-lap Swagger Factory Apparel Crate 602 Sportsman on the front row after both won their respective heat races. Mark was the race leader when the first of five yellow flags flew in the event at the completion of lap one. On lap three, eighth place starter Tucker O’Connor moved quickly up to the third position with another yellow flag out on lap four.

On the restart, O’Connor took the lead and pulled away with the yellow out again on lap seven for Tim Hartman Jr. who slowed in turn two for a flat tire. Hartman went to the hot pit for a new tire and returned to the rear of the field. O’Connor led through two more caution periods and went on to his first career win in the division followed by Mark Mortensen, 10th place starter Cody Clark, Hartman Jr., and fifth place starter Aaron Burton.

“It finally happened,” O’Connor told Mimi Lazzaro in victory lane about the win. “We had a good starting spot and just tried to stay out of the holes.”

The 20-lap Algonkin Motel Pro Stock feature saw five lead changes between five different drivers starting with outside pole position starter Andy Graves taking the lead at the drop of the green flag. When Graves slowed in turn two while leading it brought out the caution flag with Steve Cosselman taking over the lead on the restart. Chuck Dumblewski started the event in the sixth position but moved quickly to the front and was the new race leader on lap seven after getting around Cosselman on the outside of turn four.

Another driver who moved quickly to the front was last week’s winner Luke Horning who started the event in the 12th position but was running in the second spot by lap eight. One lap later the inside of turn three, Horning passed Dumblewski on the inside of turn three for the lead but that only lasted for one lap as Horning drove to the infield on the backstretch with mechanical issues handing the lead back to Dumblewski.

Seventh place starter Kenny Gates was the new second place car by lap 10 when he was side by side with Dumblewski for the lead. Dumblewski held on to the lead for one lap before Gates took over the lead and led the remaining laps for his All-Time Win List leading 84th career win and his first of 2021 followed by Dumblewski, Cosselman, 10th place starter Frank Hoard Jr., and 16th place starter Bill Knapp.

“This feels fantastic,” Gates said referring to his first win since September of 2019. “The car has been good, and we’ve been running top five and knocking on the door, tonight we finally knocked the door in.”

Next week on Saturday, June 5 the month of June starts with a racing program sponsored by Bill Lake Modular Homes featuring all regular divisions along with the CRSA Sprints with a starting time of 7:00 p.m.