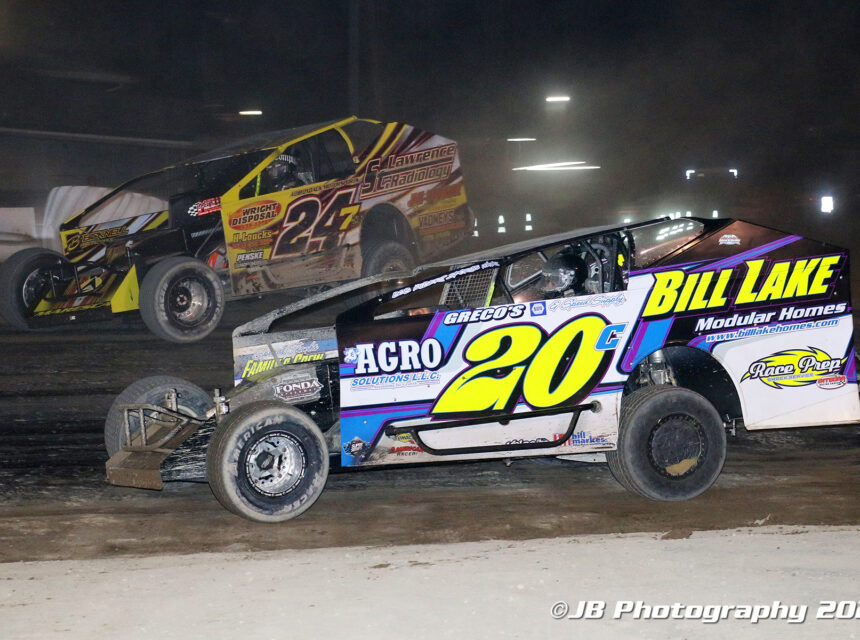 Fonda, NY – There is a great points battle going on at the “Track of Champions” Fonda Speedway in the Sunoco Modified division as Craig Hanson and Josh Hohenforst are currently tied for the number one position with 203 points each going into event number six of the 2021 racing season this Saturday, May 22.

Yurkewecz Auto Crushers will sponsor the evenings racing activities this Saturday with a regular show in all divisions on the card with racing starting at 7:00 p.m. The Algonkin Motel Pro Stocks will compete in race number two of the American Racer/Lias Tire Super Six Event paying $1,000 to win!

The question leading up to Saturday evenings activities at Fonda is who will possibly break through and take a point lead of their own on Saturday evening? Will it be Hanson, Hohenforst or one of the current top five drivers Ronnie Johnson (191 points), Jack Lehner (186 points), or Rocky Warner (184 points) that will get it done?

Defending Algonkin Motel Pro Stock champion Nick Stone currently leads the points in that division with 288 followed in the top five by Kenny Gates (242 points), Josh Coonradt and Beau Ballard who are tied for the third spot with 240 points each, Chuck Dumblewski (226 points), and Devon Camenga (205 points).

Stephen Gray is the current point leader in the Montgomery County Office for Aging Inc. Limited Sportsman division with 256 points going into Saturday evening followed by a tie for the second spot between Taylor LaPlante and Carter Gibbons who both have 252 points.

Cody Clark is the point leader in the Fuccillo Autoplex of Nelliston Thunder on the Thruway Series Sportsman points with 100 followed by Chad Edwards (90 points), a tie between Payton Talbot and Tucker O’Connor (both with 84 points), Chip Constantino (77 points) and Mark Mortensen (72 points).