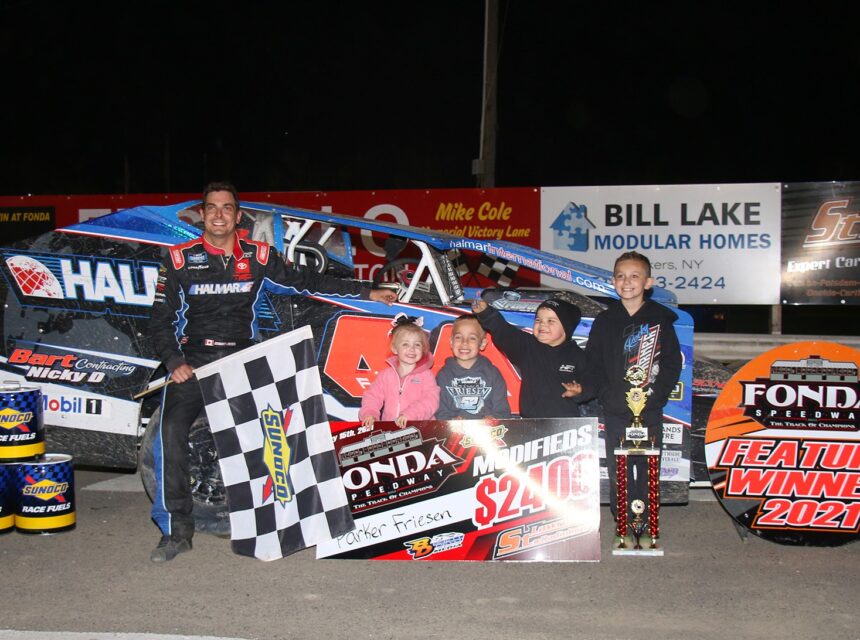 Fonda, NY – Stewart Friesen was in the house at the Fonda Speedway on Saturday evening and continued his dominance at the “Track of Champions”, taking the lead from Adam McAuliffe on lap 20 and going on to his third win of the season and the 71st of his career at Fonda on St. Lawrence Radiology Night featuring a $1 admission price to get into the grandstands.

“The track was different tonight, slick, but the groove was very wide,” Friesen told Mimi Lazzaro in the Fuccillo Autoplex of Nelliston in Memory of Mike Cole Victory Lane. “Adam (McAuliffe) drove a great race, he works hard at it, and is on his way to winning here at Fonda. He is a clean racer and a great friend.”

Fonda Speedway announcer Chris Moore gave the invocation which included thoughts and prayers to Fonda Fair Four Cylinder competitor Shawn Hemstreet and his family and friends after Shawn was involved in an accident in his garage earlier this week while working on his race car.

Stephanie May sang the National Anthem and the first green flag on Dollar Night was thrown to start the evenings activities.

Special thanks to Todd Cipperly of the Farmers Insurance Cipperly Agency of Central Bridge, NY for the giveaways to the fans at intermission and congratulations to the 50/50 winner, which was worth $3,011!

Adam McAuliffe started on the pole of the 30-lap Sunoco Modified feature event and immediately took the lead at the drop of Joe Kriss’ green flag with Geoge Foley in tow. Defending Track Champion Michael Maresca started the event in the eighth position but by lap three he swung around the outside of three cars to take away the third spot.

The first of only two yellow flags in the event flew on lap four for multi time Track Champion Bobby Varin who slowed in between turns three and four, slowing the field and taking away the straightaway advantage that McAuliffe had built up. On the restart Maresca got by two cars into the second position but the yellow came out again shortly afterwards and since a lap wasn’t completed it took away the great move that he made and put him back to fourth on the single file restart.

While Maresca moved back into the second position, Stewart Friesen was making moves into the top five after starting 12th, sitting in the fourth position after getting by two cars at once down the backstretch. On lap 11, Friesen was the new second place car after getting by Maresca with McAuliffe now out to a 3.2 second advantage. With Friesen running lap times a half second faster than McAuliffe it didn’t take long for Friesen to close in and with the help of lap traffic he was up to the leader’s rear bumper by lap 18.

After getting a great run coming out of turn two, Friesen got by McAuliffe for the lead on the inside of the backstretch on lap 20 and was lapping into the top 10 with five laps to go. Attention now turned to Rocky Warner who started ninth in the field but made his way to the front, getting by Maresca for the third position.

Friesen finished the race 4.6 seconds ahead of McAuliffe for his third win of the season at Fonda in the Halmar #44 and his 12th win overall in the 2021 season. McAuliffe, Warner, Maresca, and Dave Constantino completed the top five.

“My guys work so hard on this race car and we have it rolling now,” Friesen said in victory lane while his son Parker and his friends did a roof dance on top of the race car. “We have some good notes and packages for different racetracks, and we got it rolling now.”

Jason Reome was the pole position starter in the 25-lap Swagger Factory Apparel Crate 602 Sportsman feature with Michael McCallion second. The yellow came out shortly after the race was started for last weeks winner Jason Greco who spun in turn four with Reome again leading on the restart.

Mark Mortensen started the event in the 10th position and found the outside groove to his liking, moving into the top five by lap two. With Reome out to a big lead all eyes were on Mortensen who continued to pick off cars one by one as he took over the second position from McCallion on lap eight.

Mortensen slowly closed in on the leader, but Reome was driving a great race of his own forcing Mortensen to change grooves to the inside on lap 17. That proved to be the right move as Mortensen quickly moved in on Reome and took the lead on lap 18 after getting a great run on the inside coming out of turn two.

The final yellow of the event came out on lap 23 when Aaron Burton and Greco spun in between turns one and two. Mortensen controlled the single file restart and drove away from Reome but coming out of turn four to complete lap 24 Mortensen slowed with a right rear flat tire the result of a broken shock mount allowing the suspension to come down and shred the tire. Mortensen pitted for a new tire but there was too much damage to continue.

Reome reassumed the lead on the restart and led the final two laps for his first career win at Fonda in the Highland Enterprises Inc. #27 followed by Kurtis Hohensheldt, Payton Talbot, McCallion, and Troy Zilles.

“This has been a long time coming,” Reome said in victory lane. “Now I want to do it again.”

The Algonkin Motel Pro Stock feature began with Gary Silkey the early leader with two early yellow flags slowing the event. Josh Coonradt has had a tough start to the 2021 season but tonight he was on the move after starting eighth on the field he was up to the second position on lap eight.

Coming down the front stretch to complete lap 10, Coonradt took the lead after getting by Silkey on the outside with another caution coming out on lap 12 with defending Track Champion Nick Stone the new second place car after he started in the 12th position. Coonradt was running the outside while Stone hugged the inside groove as the two raced side by side for the lead during the final four laps in the event after another caution on lap 16.

Stone took Coonradt out to the wall in turn four with one lap to go but left plenty of room on the outside and Coonradt kept his foot in it to hold on to the lead and get the win, his first win of the 2021 season at Fonda and the sixth of his career at the “Track of Champions” in the Ted’s Body Shop #00X.

“I was upset when that final yellow came out because I knew that Nick (Stone) was right behind me,” Coonradt said in victory lane. “My car got tight in the final five laps but despite the ups and downs which everybody has in racing I had some great people behind me that wouldn’t let me quit after the tough season we’ve had so far.”

Front row starters John Young and Taylor LaPlante took the green flag in the 15-lap Montgomery County Office for Aging Inc. Limited Sportsman feature with Young leading the first lap. The caution out at that point for a spinning Jonathan Feagles in turn two but Feagles was able to drive away and restart at the rear of the field.

LaPlante took the lead on the restart with a pass on the inside of the front stretch to complete lap two and held on for his first career win at Fonda despite one final caution with three laps to go.

10th place starter Stephen Gray finished second followed by Young, Feagles who came all the way back to the front after his spin on lap one, and last week’s winner Kyle Dingman who started 13th.

“The car felt real good tonight, you have to go out and work for it for sure,” LaPlante said in his first trip to victory lane. “I’ve been dreaming about this since my father raced here at Fonda.”

Next Saturday, May 22 Yurkewecz Auto Crushers presents the $1,000 to win race #2 in the American Racer/Lias Tire Super Six Series event for the Algonkin Pro Stocks along with all other regular divisions in action with a starting time of 7:00 p.m.