FRIESEN WINS $4,000 IN THUNDER ON THE THRUWAY SERIES EVENT #1 AT FONDA 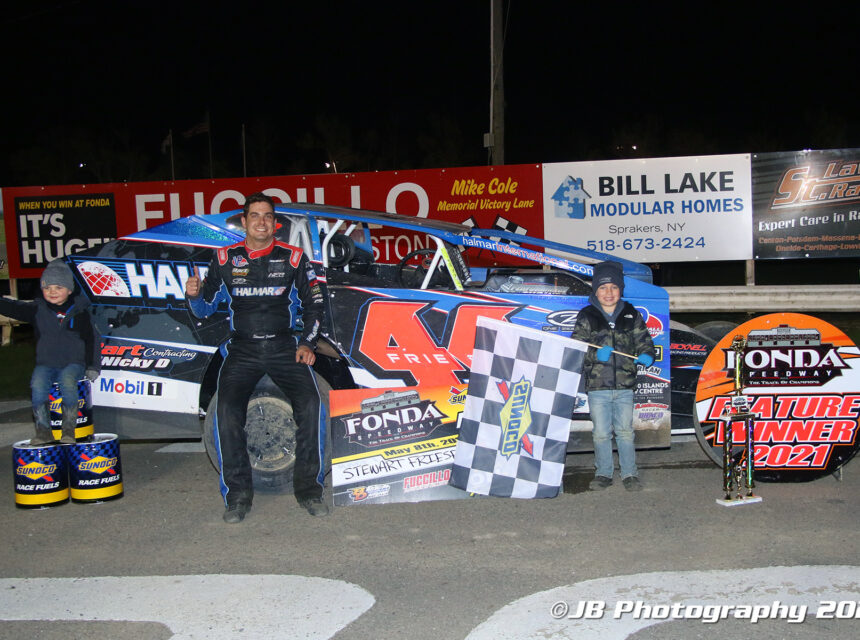 Fonda, NY – Stewart Friesen returned to Fonda Speedway on Saturday evening and dominated the $4,000 to win Sunoco Modified feature event. The event was the first of the Thunder on the Thruway Series of six events between the Fonda and Utica Rome Speedways with a great crowd on hand on a cold night by the Mohawk River.

After some great work by the track crew to get the track in shape after a rainy day and week, racing was on for Saturday with the invocation given by Fonda Speedway announcer Chris Moore followed by the singing of the National Anthem by victory lane announcer Mimi Lazzaro.

Special thanks to Todd Cipperly of the Farmers Insurance Cipperly Agency of Central Bridge, NY for the giveaways to the fans at intermission and congratulations to the 50/50 winner, which was worth $1,413!

Drivers drew for starting positions in the 35-lap Sunoco Modified feature event with Bobby Varin and David Schilling on the front row. Varin was the leader at the drop of Joe Kriss’ green flag with third place starter Stewart Friesen close behind in second. By lap six Varin was already in lap traffic with Friesen still chasing behind as Mike Mahaney, Craig Hanson, and Ronnie Johnson were moving up after starting fourth, seventh, and 13th respectively.

Friesen went by both Varin and a lap car in turn one on lap 10 to take a lead that he would never relinquish for the remainder of the event. With the race now for second the trio of Mahaney, Hanson, and Johnson continued their march to the front as they all got by Alan Johnson for positions in the top five behind Varin.

With ten laps to go Friesen was a straightaway ahead of Varin while Hanson made his way by Mahaney for the third position. The one and only caution of the event was out on lap 28 for a smoking Rocky Warner who drove into the pit area in turn three out of harm’s way. Friesen stretched out his lead on the restart as Mahaney took the third position away from Hanson, but all eyes now were on invader Matt Sheppard who was making his way to the front after starting 19th.

Friesen went on to his 70th career win at Fonda and his second of the 2021 season at the “Track of Champions” followed by Varin, Mahaney, Hanson, Johnson, and Sheppard with a great run to finish sixth.

“I felt like I let all my local fans down last evening in the NASCAR Camping World Truck Series event at Darlington while running in the second position late in the race and getting caught up in a wreck,” Friesen told Fonda Speedway announcer Chris Moore in the Fuccillo Autoplex of Nelliston Mike Cole Memorial Victory Lane. “I love it here at Fonda, we have a great race team, and the track was hammer down fast tonight, the fastest it’s been in a long time.”

After a draw for starting positions, Chip Constantino and Jason Greco were the front row starters in the 25-lap Swagger Factory Apparel Crate 602 Sportsman feature with Constantino taking the race lead early on. As Constantino stretched out his advantage just before the halfway point, the race for second was a four-car battle between Jason Greco, Tucker O’Connor, Tim Hartman Jr., and Cody Clark as Greco tried to hold the position and battle for the win.

Mark Mortensen started the event in the 16th position and was in the top 10 late in the event when he was forced into the pit area when the transmission blew on the #1M. With less than five laps to go on lap 21 the yellow flag came out for Brett Mortensen who slowed on the front stretch with a flat right rear tire and came to a stop on the backstretch not able to make it to the pit area.

On the restart, Greco took the lead away from Constantino with Hartman gaining two positions to second as Greco went on to his first career win in the division in the Greco’s Auto & Truck Center NAPA sponsored #12J. Hartman, Constantino, Clark, and O’Connor completed the top five.

“This is amazing I can’t believe it,” Greco told Mimi Lazzaro in victory lane. “It is a dream come true for sure. Chip (Constantino) drove a flawless race and I definitely needed that caution to have a chance at the win.”

By the luck of the draw Steve Cosselman and Nick Stone were the front row starters in the Algonkin Pro Stock feature with Stone taking the lead at the drop of the green flag. Chuck Dumblewski and Kenny Gates both got by Cosselman for the second and third positions while Stone continued to stretch out his advantage in the caution free event.

At the halfway point, the top five consisted of Stone, Gates, Dumblewski, Jason Morrison, and Ivan Joslin. Back in the pack after starting fourth but losing positions early, Devon Camenga put on a show to get back into the top five as he, Joslin, and 16th place starter Josh Coonradt were the drivers to watch late in the event as they gained positions to the front.

Stone crossed under the checkered flag for his 55th career win in the division and his second in a row followed in the top five by Gates, Joslin, Camenga, and Coonradt.

“Two in a row, that’s what we come here to do,” Stone said in victory lane. “The track was definitely fast, and I want to thank my car owner Todd Hoffman and my own crew that help me with my own car on Friday nights for making this a great race team.”

Kyle Dingman led every lap in the 15-lap Montgomery County Office for Aging Inc. Limited Sportsman feature for his first career win in the division followed in the top five by Jonathan Feagles, Clayton DuMond, Stephen Gray, and Carter Gibbons.

Next Saturday, May 15 St. Lawrence Radiology presents “Dollar Night” with $1.00 grandstand admission. All regular divisions will be in action with a starting time of 7:00 p.m.