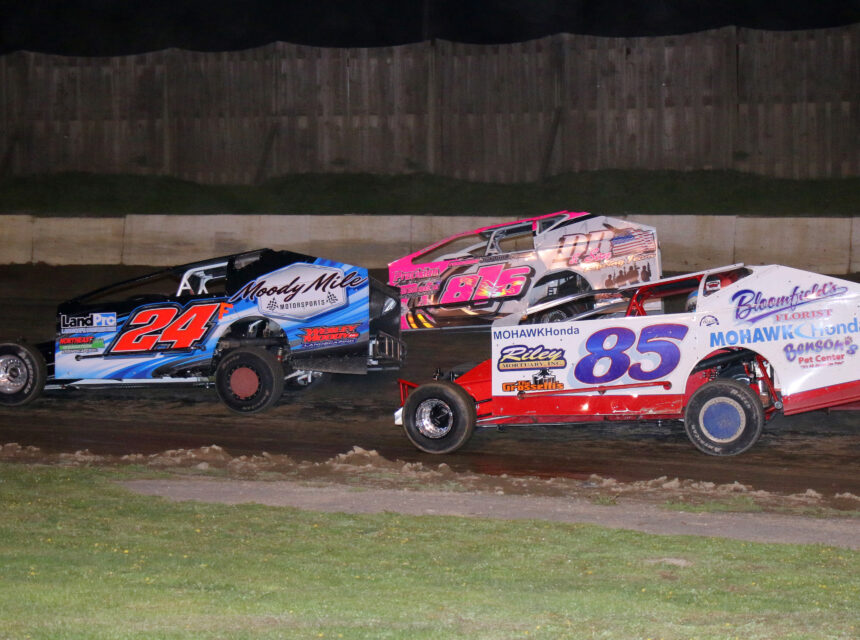 Fonda, NY – This Saturday evening May 8 at the “Track of Champions” Fonda Speedway, Pig Skin Pros will sponsor the racing activities in all regular divisions along with the Mohawk Valley Vintage Dirt Modified Series who will also be in action. Gates will open at 4:00 p.m. with hot laps at 6:00 p.m. and racing at 7:00 p.m.

The feature events for the Sunoco Modifieds, Swagger Factory Apparel Crate 602 Sportsman, and Algonkin Motel Pro Stocks will be race number one in the “It’s Huge” Fuccillo Autoplex of Nelliston Thunder on the Thruway Series between the two BD Motorsports promoted tracks, the Fonda Speedway, and the Utica Rome Speedway.

The Montgomery County Office for Aging Inc. Limited Sportsman and the Fonda Fair Four Cylinders will also be in action in their normal feature event distances.

The “It’s Huge” Fuccillo Autoplex of Nelliston Thunder on the Thruway Series will be a six-race series with three races at the Fonda Speedway and three races at the Utica Rome Speedway. A separate point fund with increased purses for each event will highlight the series and give the drivers a chance to win some extra money in purses and the point fund.

The “Man with the Red Chair” has also come on board to provide a bonus for the first three finishers in each of the three Algonkin Motel Pro Stock features held at the Fonda Speedway during the “It’s Huge” Fuccillo Autoplex of Nelliston Thunder on the Thruway Series. The top three finishers in each feature will receive $250, $150, and $100 respectively for a total of $500!

The “It’s” Huge Fuccillo Autoplex of Nelliston has come on board to sponsor the combined pace truck for both the Fonda and Utica Rome Speedways and they also sponsor the “Mike Cole Memorial” victory lane at the “Track of Champions” Fonda Speedway.

Making an appearance along with their racecars at the Fonda Speedway Hall of Fame & Museum on Saturday before the racing program begins will be last week’s Sunoco Modified feature winner Jack Lehner and the Bill & Erik Nelson owned Bloomfield’s Florist sponsored #85 along with Brian Borst and the family owned Midtel sponsored #69.

THIS WEEK AT THE FONDA SPEEDWAY

Thunder on the Thruway Series Event No. 1

Kids 11 and under FREE