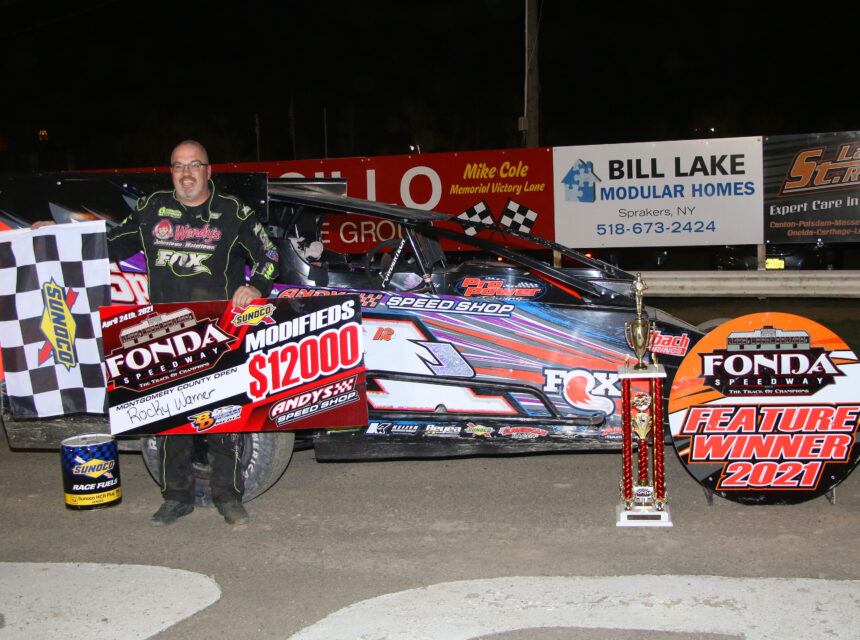 FONDA, NY – The luck of the draw placed Rocky Warner on the pole position for the start of the 40-lap, $12,000 to win Montgomery County Open at the Fonda Speedway on Saturday night in the Jake Spraker owned #1J Teo Pro Car.

At the conclusion of the 40-lap event, Warner celebrated the win in the Fuccillo Automotive Group Mike Cole Memorial Victory Lane and when victory lane announcer Mimi Lazzaro said to him nice to see you here in victory lane, his response was “I almost forgot where victory lane was,” he said. “We went winless in 2020 what a way to start 2021.”

It was Warner’s first win at Fonda since 7/27/2019, the same year that he won the Modified Track Championship at Fonda.

Before the first green flag started the racing program announcer Chris Moore gave the invocation and prayer while starter Joe Kriss performed the National Anthem. With 140 cars in the pit area, it was a busy and exciting night of racing on a beautiful spring evening.

Warner led from his pole position start at the drop of the green flag in the 40-lap Montgomery County Open Sunoco Modified main event with Jackie Brown Jr. in tow. Craig Hanson started the event in the seventh position, but he didn’t stay there long as he was already up to the fourth position on lap two with the yellow flag slowing the field at that point.

Another caution was out on the restart resulting in the next one being single file with Ronnie Johnson getting by both Bobby Varin and Hanson for the third position after Johnson started in the eighth position. Warner held a straightaway advantage by lap six with 11th place starter and defending track champion Michael Maresca making his way through the field up to the fifth position.

A restart on lap eight saw Warner continue to lead with Johnson now the new second place car while Hanson and Maresca were next in line. Maresca slowed coming out of turn four on lap 14 and drove to the infield ending his night while running fourth. Warner was in lap traffic at the halfway point in the event with the top five consisting of Warner, Johnson, Hanson, 12th place starter Matt DeLorenzo, and Varin.

With Warner having issues getting by the lap car of Shane Jablonka it allowed Johnson to close in just past the halfway point with the final yellow of the event coming out on lap 23 for Jablonka who came to a stop on the backstretch.

Warner pulled away again on the restart and led the remaining laps for his seventh career win in the division over Johnson, Hanson, DeLorenzo, and 14th place starter Anthony Perrego who was the winner of the Montgomery County Open at Fonda last fall.

“I actually hate starting on the pole I’d rather start fifth or sixth, but I just stayed on the bottom and after trying to decide whether to run a softer tire we ran the same tire that we run here weekly and it worked,” Warner said. “Last week the car just wouldn’t run, Jake came in the shop and said what’s wrong, so we sent the carburetor out and thanks to Pro Power and Willy’s for their help getting it straightened out.”

Last week’s winner and defending track champion Chad Edwards started the 25-lap Swagger Factory Apparel Crate 602 Sportsman feature on the outside pole and immediately took the lead at the drop of the green flag with Payton Talbot in tow. Cody Clark was on the move early taking the third position away from Tim Hartman Jr. on lap six and one lap later the second spot away from Talbot.

Two yellow flags slowed the field on consecutive laps just past the halfway point in the event with a single file restart ensuing on lap 15 with Edwards still in control. He would lead the remaining laps for his 11th career win in the division in the John Kollar owned #10% followed by Clark, Hartman, Tony Farone, and Talbot.

“Last week was my first ever opening night win here at Fonda and tonight was my first ever back-to-back win,” Edwards said in victory lane. “The track was completely different from last week, but I started on the outside pole and got in front of the #14 at the start and tried to stay on the bottom.”

Devon Camenga started the 20-lap Algonkin Motel Pro Stock feature on the pole and led at the start over third place starter Steve Cosselman. On a restart after the first yellow flag in the event on lap four, Camenga continued to lead with Jim Normoyle and Jason Morrison the new second and third place cars while seventh place starter and defending track champion Nick Stone went three wide on the backstretch to get into the top five.

Another caution on lap six slowed the field and on this restart Morrison and Stone were now second and third, with Stone getting past Morrison for the second position just before another caution flag flew to slow the field. At the halfway point, the top five consisted of Camenga, Stone, Morrison, Chuck Dumblewski, and Normoyle with one final caution flag out on lap 11.

Camenga continued to lead on the restart with Stone pressuring him for a couple of laps before Camenga started to pull away. Eighth place starter Kenny Gates was the new third place car on the restart, but it was Camenga who pulled away and took the checkered flag to become the 97th different winner on the All-Time win list with his first career win.

“It’s been a little over nine years to get my first career win anywhere,” Camenga said in victory lane. “People don’t realize how hard it is but tonight they were going to have to move me off the bottom if they were going to get by me. I’m at a loss of words right now.”

Carter Gibbons led every lap in the 15-lap Montgomery County Office for Aging Inc. Limited Sportsman feature event for his first career win at Fonda. Last weeks winner Jeremy Tyrrell was second followed by Taylor LaPlante, Clayton DuMond, and Mike Formont. “I can’t believe it,” Gibbons said in victory lane. “I’ve been trying a long time for this and have a lot of second place finishes to show for it until tonight.”

The two winners in the Fonda Fair Cruiser division were disqualified with Slappy White (DOHC) and Wayne Russell Jr. (SOHC) being declared the winners. For White it was his first career win at Fonda while for Russell it was his second career victory.

Next Saturday, May 1 will be O’Connor Motorsports/Southern Adirondack Night at Fonda with Dollar Dogs and all divisions in action. It will be the first of six events in the Pro Stock American Racer/Lias Tire Super Six Series with $1,000 to win. Gates will open at 4:00 p.m. with hot laps at 6:00 p.m. and racing at 7:00 p.m.