JACK JOHNSON IN THEIR OWN WORDS 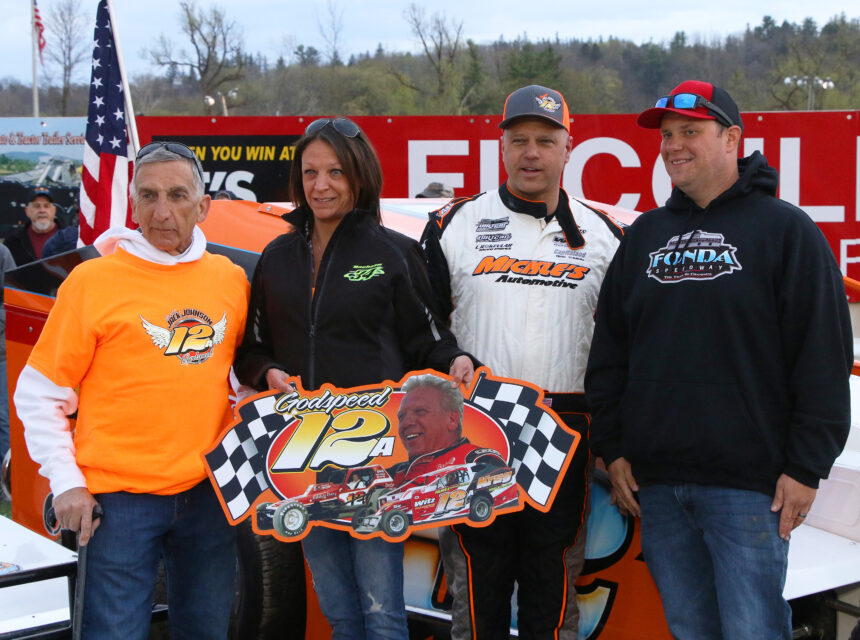 Fonda, NY – On Saturday evening at the “Track of Champions” Fonda Speedway, a place that the late Jumpin’ Jack Johnson called home for many years during his racing career, his son Ronnie Johnson, daughter Natalie Bachetti, brother Jeff Johnson, and personal friend and crew member Joe Bellomo stood on victory lane telling stories and sharing thoughts on their time spent with Jack and what Jack meant to them.

Joe Bellomo was inducted into the Fonda Speedway Hall of Fame along with Jack Johnson, Artie DeSarbo, and JoJo DeSarbo.

It was a heartfelt and special moment in the history of the Fonda Speedway and won’t ever be forgotten by those in attendance at the track or those listening to it on the live broadcast of the event. The following is a recap of the ceremony on victory lane as said in their own words.

Brett Deyo was first to speak on behalf of the Fonda Speedway saying, “The Johnson family has done so much for the Fonda Speedway and given so much that today we want to give them something back so to Ronnie and Natalie here is something for you and your family.” Deyo then handed them a plaque saying Godspeed 12A with photos of Jack and two of his former racecars on it.

“Thank you very much,” Ronnie Johnson said. “It is such an honor to be here, this is gonna be tough, but I really appreciate it.”

“You have supported me since I took over Fonda,” Deyo told Ronnie. “We love having you here tonight.”

Next to take the mic was Melissa Lazzaro known to most of us as “Mimi”. She didn’t need any of Jack’s stats to talk about, she spoke and asked questions from the heart making it all very special. At one point during the ceremony there were three family representatives of Fonda Speedway history on victory lane Ronnie, Mimi, and Jessica Lape-Schwab who was representing the Fonda Speedway Hall of Fame & Museum.

“We are going to keep this positive, no crying in victory lane,” Mimi said.

“When I started coming to the races as a little kid, I would see all of these people around my dad and I didn’t like it,” Ronnie Johnson said. “Maybe I was a little jealous, I didn’t understand it because I was so young. As I became old enough to understand it, I would sit in the grandstands just like everything else and I said wow my dad is pretty cool.”

“It was a whole learning curve of figuring out who my father was. It was really a privilege to be his son, come to the races, and see all his orange t-shirts, along with all the fights between the Jack Johnson and CD Coville fans back in the day. I grew up in a great era, when I walked down the hallways in school and saw the kids walking down the halls with a Jack Johnson t-shirt on, I would put my head down because I was shy.”

“On the flip side of that he is a hero to many including myself, but I also got to know the back of his hand. What I mean by that is his discipline and there were times that I didn’t like it when he gave me the belt, or the back of his hand and I said what do these people like about this guy?”

“He had a way with people that was second to none. He always knew how to make everyone smile and he had a touch for everybody including myself because if I did get the belt five minutes later, I still loved him. It was really cool and an honor to be his son and grow up here at Fonda.”

“It’s pretty funny, I sent George Smith a couple of drawings that my father did. Back in the 50’s my father was doing drawings of race cars which he signed drawings by Jack Johnson. It just goes to show that he started out as a little kid coming to this racetrack and looking up to people like Lou Lazzaro and different drivers back in the day. So, it shows that you can start out in the grandstands and still become a race car driver.”

“First of all, I never got the belt like my brother did,” Natalie Bachetti said. “He was just dad to me. I knew that he was something special, but he was still just dad.”

“My father was a jokester and he liked to play tricks on JoJo DeSarbo who was a crew member for my father from 1971 on,” Ronnie Johnson said. “My father was racing at Weedsport, NY one Sunday and JoJo went into the trailer to wash his hands and my father closed the door behind him. Before my father knew it, he was talking to the fans and then all of a sudden he got in the truck and started driving home down the Thruway.”

“My father would never stop on the way home but that night he did and out in the parking lot of the rest area somebody came up to him and said is that your truck and trailer? My father said yes, why and they said you’re an evil man, there is a man in that trailer. JoJo was locked in the trailer and after my father let him out JoJo wouldn’t talk to him for what seemed like a month.”

“I’ve been here at Fonda for a long time,” Jeff Johnson was next to say. “When my brother beat Pete Corey in a heat race, I knew we had a race car driver in my brother Jack. It took quite awhile after that to get another win but that is what I remember that started his whole career. Myself, Jack, and my other brother Joe all raced and it was a legacy that we carried on quite well. Jack made a lot of heroes, he was my hero since day one, and he was obviously quite a champion.”

“I’ve been coming to the Fonda Speedway all of my life and I see the museum back here and for all of these years I’ve been hoarding all this stuff,” Ronnie Johnson said. “I’m probably the biggest Jack Johnson fan walking and I have things that I’d like to donate to the Fonda Speedway Museum tonight. It’s something that I’ve been struggling with but here are a few things that I have.”

“I’ll start off with the 1979 Syracuse Championship trophy, it’s hard to part with it but it’s yours for the museum where it belongs. I was in turn two standing on the infield for that race when I was five or six years old, and I have some memories of that race. I remember with three laps to go the caution came out and he was leading, he came by and gave us a thumbs up out the window.”

“I’d also like to donate the embroidered 1975 Track Championship jacket back from when Coca-Cola used to sponsor my father. Joe Bellomo was with my father as a crew member since 1972. After my father retired Joe never left, never worked on another racecar, never even looked at another racecar. He believed in orange just like the rest of us. On behalf of Joe, I’d like to donate his BR DeWitt pit uniform from the 1984 Syracuse event.”

“I was very tired when Jack retired but Ronnie sucked me back in,” Joe Bellomo said. “We get along good, and I’ve known him since he was born. We did a lot of racing together; Ronnie won a lot of races here at Fonda and he always asked me why I never came to victory lane for a photo. I told him when he won a track championship I would come out for a photo and in 2011 and 2016 he did just that.”

Randy and Travis Colegrove were on hand at the ceremony to accept all the donations from Ronnie for the Fonda Speedway Hall of Fame & Museum.

“Thank you to all the fans for being so dedicated to Jack, I know that he is looking down on us tonight appreciating everything,” Jeff Johnson said in conclusion.

Natalie Bachetti concluded the night saying, “Thank you all for coming.”

“I’m happy to be here and thankful to all of the fans for their support after the loss of my father,” Ronnie Johnson said in conclusion. “I appreciate all of their responses, text messages, phone calls, and Facebook posts along with everything that people have sent to my house. It is overwhelming and it will take awhile for all of this to sink in.”

“My dad, he was a little shy, kind of reserved, but I know that he loved all the fans and he lived for it. He wasn’t who he was if he didn’t love it. But he did love it and he loved everybody.”