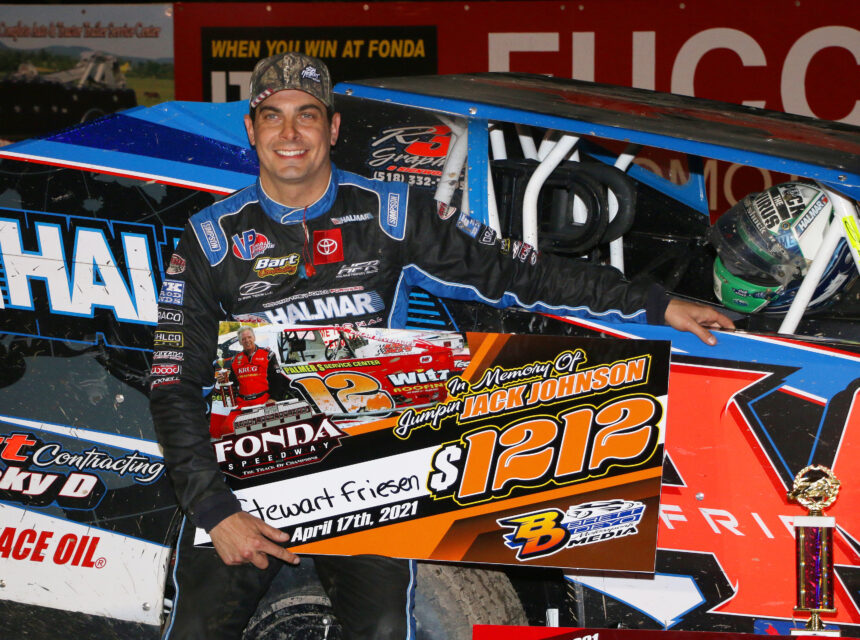 Fonda, NY – Special, emotional, and memorable would be three ways to describe the ceremony held before the racing action began on Saturday evening at the Fonda Speedway to honor the late Jumpin’ Jack Johnson who was an icon at the “Track of Champions” throughout his career.

Jack’s son Ronnie, daughter Natalie, brother Jeff, and family friend Joe Bellomo all stood on victory lane to honor Johnson along with four of his former race cars that were also on display during the ceremony. There wasn’t a dry eye in the grandstand or bleacher area as one by one each of them told stories about Jack. More on the ceremony to come in a separate release.

Dominant was the one and only word to describe the Sunoco Modified feature as Stewart Friesen started on the pole by the luck of the draw and led every lap of the 30-lap event which saw $1212 added to the original winners share of $2400 by Fonda Speedway management in honor of Jumpin’ Jack Johnson for a total of $3612 to the winner.

Friesen started the evening by winning his heat race and setting a new track record of 17.74 seconds during the event. The old record was held by Anthony Perrego with a lap of 18.12 back on 9/20/2020.

Fonda Speedway announcer Chris Moore did a great job in his first night announcing at Fonda and did the invocation before Mimi Lazzaro performed her beautiful rendition of the National Anthem. Then it was time to start the 70th consecutive season of competition at Fonda with excited fans in the stands eager to see some racing action.

Friesen took the lead at the drop of Joe Kriss’ green flag at the start of the 30-lap Sunoco Modified feature with Michael Maresca taking the second position away from Josh Hohenforst. Friesen was already in lap traffic by lap four with Maresca trying to keep pace with the leader. Coming down the front stretch one lap later a lap car made contact with Maresca but fortunately it was nothing major and both were able to continue on in the event.

Hohenforst took the second position away from Maresca on lap 12 after Maresca was blocked by a lap car and at the halfway point Friesen, Hohenforst, Maresca, Rocky Warner, and Demetrious Drellos held spots in the top five. Lap 16 saw Friesen leading by close to a half track but when a car slowed on the backstretch the yellow came out and took away his huge lead.

On the restart coming out of turn two, Hohenforst slid up in front of Friesen to take a brief lead but by the time the lap was completed Friesen took the lead back and quickly pulled away to a big lead. At the drop of the checkered flag Friesen was the winner by 8.3 seconds over Hohenforst, Maresca, Drellos, and Bobby Varin.

“Special thanks to Jess (Stewart’s wife Jessica) who drew number one for me tonight and for all the Jumpin’ Jack Johnson fans who came out tonight,” Friesen said in the Fuccillo Automotive Group Victory Lane in Memory of Mike Cole. “It is great to see fans in the grandstands again, it is gonna be a great summer.”

“We had a great hot rod tonight,” Friesen said and when asked by Mimi Lazzaro in victory lane how it was in the day in the life of Stewart Friesen to fly into a race at Fonda after running an entire NASCAR Camping World Truck Series event Friesen added “it is pretty damn cool, when I was a kid, I dreamed of doing this.”

The 25-lap Swagger Factory Apparel Crate 602 Sportsman feature began with Tim Dwyer leading from his pole position start with EJ McAuliffe in the runner-up spot. A yellow flag flew on lap four for two cars who suffered flat left rear tires, Brian Calabrese, and Troy Palmer. Both cars were able to restart at the rear of the field.

On the restart, Dwyer held the lead while seventh place starter Mark Mortensen went from sixth to fourth only to have the yellow come out again before any laps were completed. A single file restart was next with the top three of Dwyer, McAuliffe, and Edwards pulling away in a separate race for the lead while Mortensen made his way into the fourth position on lap seven.

On the outside of the backstretch on lap eight, McAuliffe was the new race leader while Edwards also got by Dwyer for the second position. At the halfway point in the event McAuliffe, Edwards, Mortensen, Dwyer, and 11th place starter Tim Hartman Jr. filled the top five positions with another caution out one lap later.

Edwards took the lead on the restart and pulled away from Mortensen for the win with Mortensen, Hartman, 14th place starter Cody Clark, and 16th place starter Tony Farone completing the top five. In victory lane Edwards described his race night which wasn’t an easy one for him and his crew as his car had to be towed to victory lane because it was stuck in high gear and wouldn’t move after going over the scales.

“We broke a driveshaft in our heat race, and it mangled the linkage to the transmission,” Edwards said. “We kept working on it right up until feature time and got it back together, so I have to thank my crew for all of their hard work tonight. The track was in awesome shape tonight and I never lifted after that last caution.”

In victory lane Edwards dedicated the win to Deb Rullison, a family friend who passed away recently.

On the outside of the backstretch on lap five, Morrison took the lead away from Dumblewski with 12th place starter Beau Ballard taking two spots from fourth to second on lap seven in turn one. Ballard’s car was working well on the inside of the speedway and on lap nine in turns one and two he took the lead away from Morrison. With five laps to go Ballard held a straightaway advantage over seventh place starter Andy Graves who was now the second-place car with positions in the top five changing many times over the final few laps.

When the checkered flag flew it was Ballard who won for the first time in the Pro Stock division at Fonda followed by 17th place starter Nick Stone, Graves, Morrison, and 10th place starter Steve Cosselman.

“It’s been 13 years since I’ve been here,” Beau Ballard told Mimi Lazzaro in victory lane regarding his last IMCA win. “We trashed a brand-new car in warm-ups last week here at Fonda and to come back and put our car together from last year and win from 12th, somebody pinch me.”

Jeremy Tyrrell led every lap in the 15-lap Montgomery County Office for Aging Inc. feature event for his first career win in the division at Fonda and was followed in the top five by Carter Gibbons, Stephen Gray, Taylor LaPlante, and Jonathan Feagles.

Next Saturday, April 24 the 40-lap $12,000 to win Montgomery County Open will highlight the racing program sponsored by Andy’s Speed Shop. All other regular divisions will also be in action along with the Mohawk Valley Vintage Dirt Modified Series (MVVDMS). Events for April see gates opening at 3:30 with hot laps at 5:30 and racing at 6:30.

In heat race one Stewart Friesen broke the track record with a lap of 17.74 the old record was set by Anthony Perrego on 9/20/2020 with a lap of 18.12 (corrected from the quick results sent out last evening).