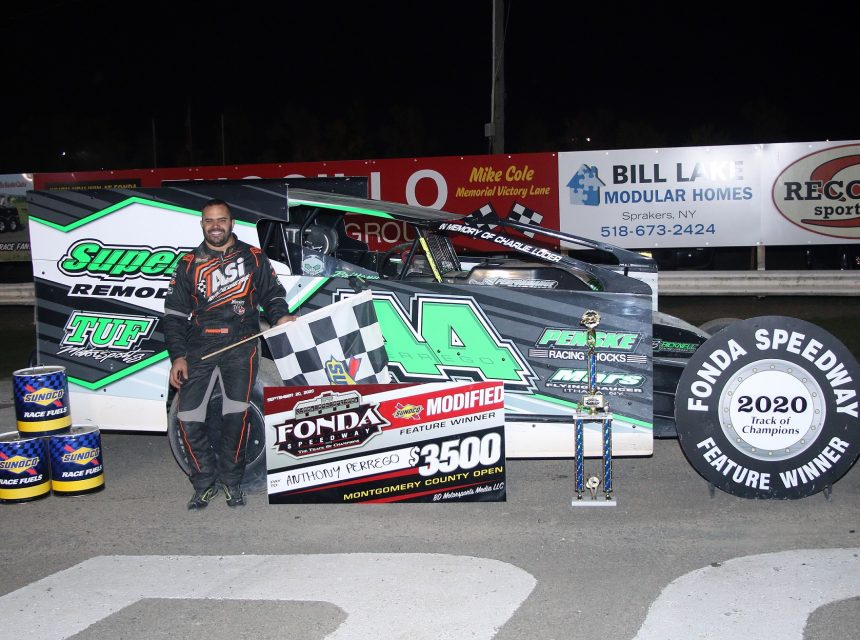 Fonda, NY – Anthony Perrego has had a lot of success at his home track the Orange County Fair Speedway with feature wins and championships but with only occasional visits to the “Track of Champions” Fonda Speedway has not seen the success that he would have liked. That all changed on Sunday evening when he took the Superior Remodeling #44 Bicknell car to the Fuccillo Automotive Group Mike Cole Memorial Victory Lane for his first career win at Fonda.

“I learned something tonight,” Perrego told victory lane announcer Mimi Lazzaro in victory lane. “Once I got by the lap traffic, I stayed on the bottom in turn four and I had a real good race car tonight.”

Perrego also turned a fast lap of 18.12 in heat race number one which surpassed the track record of Bobby Varin back on 4/11/2009 of 18.136. Perrego’s lap was turned with sail panels on his Sunoco Modified while Varin’s was with the traditional body style so this will be noted as such in the Fonda Speedway record book.

Crystal Smith of Ballston Spa was the winner of $808 in the evening’s 50/50 drawing.

Mimi Lazzaro started opening ceremonies just before the racing event went live on Dirt Track Digest TV saying “Beautiful day for racing today but unfortunately it is with heavy hearts as our videographer Bob James passed away this week after a long battle with cancer.”

Ed Biittig Sr. then gave the invocation before the racing program got started and touched on the life of a dear friend of his Bob “Bobco” James.

“This year, 2020, has been a season that nobody will ever forget,” Biittig Sr. said. “To add into all of the losses that have taken place this year we now add the name of Bob James who has done so much for racing. Bob started videoing racing events long before we had the equipment that we have today.”

“I heard someone say that he passed away at 5:00 a.m. in the morning, that was usually the time that he finished doing his videos after a night of racing to put together a finished product,” Biittig continued to say. “At any given time if you needed something, Bob would drop everything to help you out. I stopped to see Bob’s mother and gave her a photo of the “Bob James Terrace” on top of the Fonda Speedway covered grandstands and she was taken back that we thought so much of her son to do that for him.”

“But that is what racing people do, that is who we are, we are a different breed,” Biittig Sr. said in conclusion. “It is my firm belief that tonight Bob James is videoing a race with Lou Lazzaro on the front row.”

A moment of silence was observed for Bob James before Mimi Lazzaro did a beautiful rendition of the National Anthem.

A redraw placed Billy Decker and Bobby Varin on the front row for the $3,500 to win Sunoco Modified feature event with an early caution coming out with no laps completed for Darren Smith who was in the inside front stretch wall. Smith was not injured but was done for the evening at that point.

Jessica and Stewart Friesen who started 11th and 13th respectively were making moves to the front by that point in the race as well with Jessica in the fourth position and Stewart just behind in fifth. Perrego held a straightaway advantage by lap 10 and at the halfway point in the 30-lap event the top five consisted of Perrego, Decker, McAuliffe, Jessica Friesen, and Stewart Friesen.

One lap passed the hallway point McAuliffe made his move to the second position after getting by Decker with Stewart Friesen getting by his wife Jessica for the fourth position. While Perrego was battling lap traffic over the remaining laps with a comfortable lead, Stewart Friesen’s car seemed to get better and better as he passed cars one by one in the late stages of the event.

As Perrego took the checkered flag for the victory, Stewart Friesen was passing McAuliffe for the second position which he would do on the final lap with the top five at the finish consisting of Perrego, Stewart Friesen, McAuliffe, Jessica Friesen, and 12th place starter Josh Hohenforst.

“My car was a little tight all night long, but we were one of the better turning cars tonight and that is what got us the win,” Perrego said in victory lane.

The 25-lap $1,000 to win Swagger Factory Apparel feature began with 2020 Track Champion Chad Edwards on the pole after a draw for position with Edwards taking the lead at the drop of the green flag. Bobby Hackel IV started the event in the fourth position and was up to second by lap three after getting by Adam Pierson for the spot.

By lap seven Edwards was in lap traffic and that continued to lap 12 when the race really started heating up for the lead between Edwards and Hackel. Hackel took the lead in lap traffic on lap 12 before he and Edwards swapped the position once per lap for the next three circuits. Hackel was the race leader when the caution came out on lap 15 with Edwards, Tim Hartman Jr., Pierson, and 12th place starter Cody Clark in the top five with 13th place starter Mark Mortensen just behind in sixth.

From that point on Hackel and Edwards spent many laps side by side with Edwards regaining the lead on lap 20. One final caution slowed the field with two laps to go as Griffen Mansmith stopped on the track with a flat tire but as soon as the yellow was thrown, he drove into the pit area.

On the restart, Edwards maintained the lead until the final lap when Hackel was able to get by for his first career win at the “Track of Champions” in the division in the Killer Crate #97. Edwards, Hartman Jr., Clark, and Mortensen completed the top five in the event.

The 20-lap Algonkin Motel Pro Stock feature was also $1,000 to win event with Jim Normoyle leading at the drop of the green flag from his pole position start. Third place starter Devon Camenga took over the number one position on lap two with Luke Horning third on lap three after starting seventh.

Fourth place starter Kenny Gates was the new second place car on lap seven and for the remainder of the event it was a see saw battle between Horning and Gates with Horning running the outside lane while Gates ran his traditional groove hugging the bottom of the track.

Horning and Gates were side by side for the lead with five laps to go in the event, but Horning was able to hold on to the spot at that point in lap traffic. The caution came out with one lap to go as Chuck Dumblewski drove to the infield on the front stretch setting up a one lap dash to the checkered flag.

Horning led the rest of the way in the Catalytic Recovery/West End Towing/L/M Mason sponsored #2H while under heavy pressure from Gates for his first win of the season and the 21st of his career in the division over Gates, Camenga, Bill Knapp, and 2020 track champion Nick Stone.

“At one point starter Joe Kriss was showing me that I had a big lead with his flags but then he stopped doing that and I said to myself Joe don’t do this to me,” Horning said in victory lane. “When Kenny (Gates) showed me his nose I knew that I had to stay on the bottom because I didn’t think that he would go around me on the outside.”

The 15-lap $500 to win Robert’s Towing & Recovery Street Stock feature began with outside pole position starter Hunter Sanchez taking the lead at the drop of the green flag. Sanchez led every lap to go on to win by a straightaway in his first career win at Fonda over Zach Sorrentino, John Devine, Jason Samrov, and Matt Mosher.

Josh Kane led the first six laps of the Four Cylinder Cruiser feature until 2020 track champion Ken Hollenbeck took over the lead on lap seven with a pass in between turns three and four. Brandon Tyler challenged Hollenbeck for the victory until a side by side restart after a lap nine caution when Hollenbeck pushed Tyler all the way to the wall in turn four to protect his lead and went on to the win in the SOHC while Kane was declared the winner in the DOHC.

The 2020 season at the “Track of Champions” Fonda Speedway is now completed but please continue to look on Facebook, Twitter, or the Fonda Speedway website for future plans at the speedway.