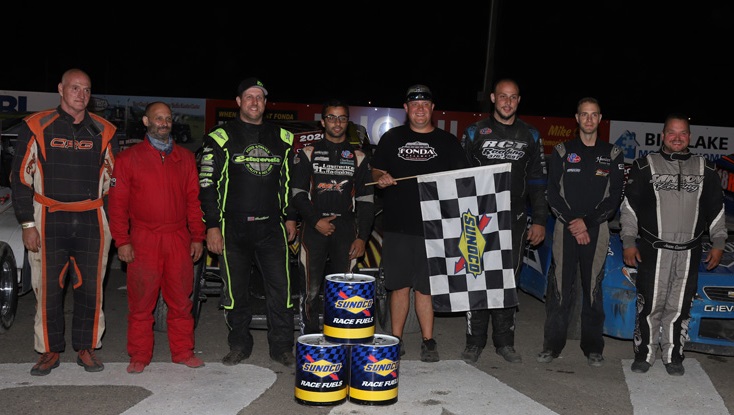 Fonda, NY – Saturday evening was Championship Night at the “Track of Champions” Fonda Speedway and it was one to remember as Stewart Friesen and Michael Maresca put on a crowd pleasing dual for the fans watching on Dirt Track Digest TV, swapping the lead numerous times with only a few laps to go in the Sunoco Modified feature event.

When Joe Kriss’ checkered flag waved at the end of 30 laps it was Friesen who won for the eight time this season in nine events an incredible achievement. Another incredible achievement was made by Michael Maresca who joined four other drivers as a Modified Track Champion at Fonda without a feature win during the season.

The drivers who have won a Modified title at Fonda in the past without a win during the season include Jim Luke in 1955, Don Hendenburg in 1956, Pete Corey in 1965, Ray Dalmatta in 1979, and now Michael Maresca in 2020. Special thanks to Ed Biittig Sr. for those statistics.

2020 Montgomery County Office for Aging Inc. Limited Sportsman Track Champion Brett Mortensen and his brother Mark (Crate 602 Champion in 2011) now join Ken Hollenback and his brother Kerrie Hollenback (2013 DOHC Four Cylinder Champion) as the only brothers to have ever won a championship in the history of the Fonda Speedway.

It was a great night for “Doc” Maresca and the guests of St. Lawrence Radiology to be at the track to witness their driver Michael win the Modified Championship in the Bill Schoon’s owned #24-7. Congratulations to them and all the other 2020 champions. Also, on hand were Mike Sowle and Tom Hall who put up $800 for an Algonkin Motel Pro Stock Dash won by Nick Stone. Thanks to them for their support of the Fonda Speedway!

The Ayers Memorial Animal Shelter in Sprakers, NY also put up a bonus of $100 to the winner of the Montgomery County Office for Aging Inc. Limited Sportsman feature event which was won by Brett Mortensen along with a $50 to the second and third place finishers in the event won by Dylan Eldred and Carter Gibbons. Thanks to them as well for their support of the Fonda Speedway!

During opening ceremonies on Saturday at Fonda, Mimi Lazzaro mentioned how the entire Fonda Speedway staff was thinking of Fonda Speedway promoter Bret Deyo’s wife Heather who is recovering at home after a recent surgery. Get well soon Heather!

Joe Kriss sang the National Anthem and then the Dirt Track Digest cameras were ready to do a fantastic job streaming the event live as the grandstands and infield were closed to fans due to New York State regulations.

The 50/50 was won by Keith Dwyer from Johnstown, NY and was worth $913! Great job by 50/50 ticket sellers Julie Compani and Heather Marr!

Steve Akers and Dave Constantino started the 30-lap Sunoco Modified feature on the front row with Constantino leading at the drop of the green flag with David Schilling in tow. The first yellow flag of the event came out on lap six and on the restart, Constantino continued to lead with Josh Hohenforst and Michael Maresca the new second and third place cars after both were able to get by Schilling for position.

After another restart on lap 10, Maresca was the new second place car after getting by Hohenforst with 12th place starter Stewart Friesen now in the top five. Maresca started pressuring the leader on lap 14 while Friesen was one of only a few drivers using the inside lane to gain positions to the front. By lap 18 Friesen used the inside groove to get by both Matt DeLorenzo and Hohenforst for the third spot.

Maresca went under Constantino in turns one and two on lap 20 and used a slide job to get the lead in the event going in to turn two with Friesen also getting by Constantino for the second position. From that point on Maresca and Friesen put on a great race to the checkered flag, swapping the lead three times until the checkered flag flew.

On the inside of the backstretch on lap 22, Friesen got by Maresca for the lead before Maresca returned the favor and got the lead back one lap later. Just as it looked as though Maresca was going to go on to the win, Friesen made another pass on the inside of Maresca on the inside of turn four with two laps to go and went on to his eighth win of the season and the 68th of his career at Fonda in the Halmar #44 Bicknell car.

Maresca, Hohenforst, Constantino, and Jessica Friesen completed the top five in the event.

There was a $1,500 bounty called “Mimi’s Bounty” that was up for grabs for anyone who could defeat Friesen while he was still running on the track at the completion of the event. With the win Friesen received half of that amount with the other half set to go to the Crossroads Center for Children which is an Autism Awareness establishment in Schenectady, NY where Stewart and Jessica Friesen’s son Parker has attended. Friesen however chose to give the entire $1,500 amount to the Crossroads Center when he received it in victory lane from Mimi Lazzaro.

“The car was a little bit tight and the line changed quite a bit,” Friesen said in the Fuccillo Automotive Group Mike Cole Memorial Victory Lane. “But when it came down to the nitty, gritty the Halmar Team got it done for the win but just fell short of the title. Michael Maresca will be a great champion for the Fonda Speedway, I have a lot of respect for him and his family and what they have done for the sport. Also, thanks to everyone who gave money to the bounty that Mimi put together.”

The 25-lap Swagger Factory Apparel Crate 602 Sportsman took two tries to get started but when it did David Manchester took the lead after starting on the outside pole position. Michael McCallion was the other front row starter and took the lead away from Manchester on lap two as the lap was completed.

Fourth place starter Tony Farone also got by Manchester at that point while Tim Dwyer got by Manchester for the third positions on lap six. Manchester’s great run came to an end on lap seven when he spun in turn one bringing out the caution for the first of only two times in the event.

On the restart, Farone was the new race leader while sixth place starter Mark Mortensen was the new second place car followed by Dwyer in third. Farone was running the middle to low groove on the track while Mortensen was running the extreme outside groove against the wall in between turns one and two for the remainder of the event with the final yellow coming out with five laps to go.

Mortensen stayed with Farone on the restart but as the laps went on Farone maintained a comfortable lead to get his first win of the 2020 season and the sixth of his career in the division in the Hometown Pub & Grub sponsored #18 Bicknell car over Mortensen, Dwyer, 12th place starter Chad Edwards, and eighth place starter Brian Borst.

“We were jumping around this season between Albany Saratoga, Fonda, and Glen Ridge but Fonda is home and it always will be home,” Farone told Mimi Lazzaro in victory lane. “I’m glad to be here tonight and hopefully we can race again here this season but if not, I am already looking forward to 2021.”

Harold Robitaille led the first five laps from his outside pole position start with sixth place starter Brett Mortensen moving up to the second position by lap three after getting by Clayton DuMond for the spot. The first of four yellow flags came out on lap six with Mortensen getting the lead once the race was restarted on the inside of turns one and two with ninth place starter Dylan Eldred the new second place car.

At the halfway point, Mortensen held a straightaway advantage over Eldred but that closed up with another caution on lap 13. Mortensen and Eldred maintained the top two positions on the restart with 10th place starter Johnny Young the new third place car with one final caution coming out on lap 17.

Mortensen held the lead on the single file restart and went on to his third win of the season and the fifth of his career in the division in the 518 Realty sponsored Teo car over Eldred, Young, 13th place starter Troy Zilles, and Carter Gibbons.

In post-race tech both Young and Zilles were disqualified moving Gibbons up to third, Jeff Lutes up to fourth, and Kyle Dingman up to fifth.

“That was a tough race but we were able to come out on top,” Mortensen said in victory lane after celebrating on the roof of his car with a bottle of champagne that his brother Mark gave him as he exited the racecar. “I got the lead on the restart and knew I had to hold off Dylan (Eldred) for the win and we were able to do that.”

Andy Graves started the Algonkin Motel Pro Stock feature on the outside pole and led at the drop of the green flag. Jim Normoyle started the event in the eighth position and by lap six was the new second place car after getting by Jason Morrison for the spot. Nick Stone started 12th and was in the top five by lap seven but one lap later he was going in between both Normoyle and Graves for the lead in turn two.

Stone maintained a straightaway lead with five laps to go with seventh place Luke Horning on the move in the closing laps, getting into the second position on the final lap while Stone went on to his seventh win in eight events in 2020 in the self-built, Hometown Pub & Grub sponsored #27.

“The car is good, especially when there are two grooves to work with,” Stone said in victory lane. “When I can work the entire race track the car is unbelievable, it’s hard not to get to the front.”

Michael Arnold started in spot number one for the Robert’s Towing & Recovery Street Stock feature and led every lap to get his first win of the season and the fourth of his career in the division over Al Relyea, Zach Sorrentino, Lou Gancarz, and Jason Samrov.

Wayne Russell, and Cole Lawton, took turns leading the first four laps of the Four Cylinder Cruiser feature before 11th place starter Ken Hollenback took over the point on lap five on the inside of turns three and four. Hollenback led the remaining laps for the overall win in the SOHC class while John Napoli finished second overall and declared as the DOHC winner. Dan Haslun, David Peek-Britten, and Russell completed the top five.

BONUS ON BEHALF OF THE AYERS MEMORIAL ANIMAL SHELTER

$100 to the winner Mortensen, $50 to the second and third place finishers – Eldred, Gibbons