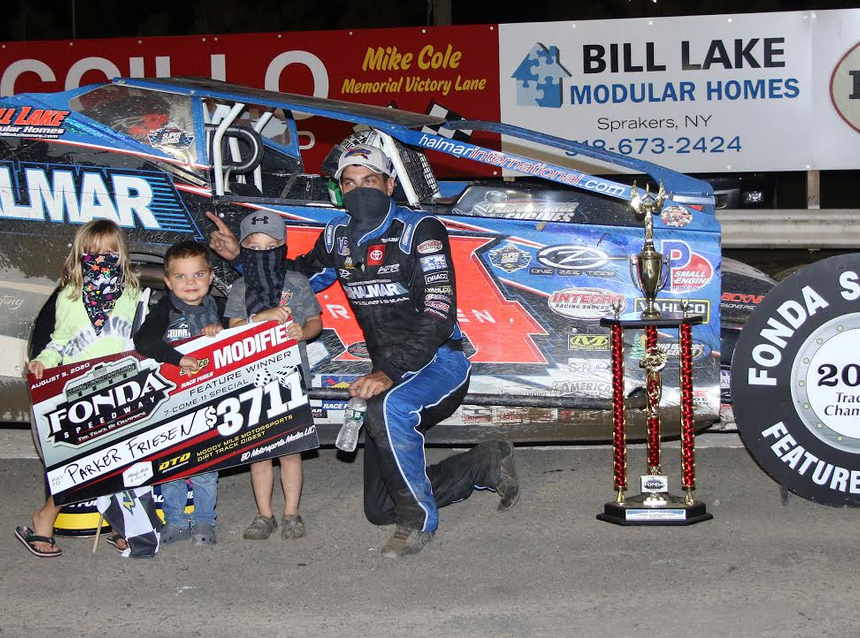 Fonda, NY – Presented by Moody Mile Motorsports, Moody Tree Farms, and Dirt Track Digest the 7-Come-11 special at Fonda was run on Wednesday evening for the Sunoco Modified division. The 30-lap, $3,711 to win event was the final race on the Fonda Speedway schedule until Saturday, August 15 when track champions are crowned in all divisions on “Championship Night”.

Also, in competition at Fonda on Wednesday were the Swagger Factory Apparel Crate 602 Sportsman and the Algonkin Motel Pro Stocks with the winners of those two events being Cody Clark and Nick Stone, respectively.

Mimi Lazzaro sang the National Anthem in opening ceremonies for the event which was televised live on Dirt Track Digest TV while the 50/50 girls were also busy selling tickets with the winner going home with a total of $582.

The 7 come 11 special didn’t start out too well for a few drivers as Jeff Heotzler, Danny Varin, and Pep Corradi all suffered either motor or other issues during the hot lap session which sidelined them for the evening. Larry Wight was also on hand debuting a brand new DKM “Cyclone” Chassis but contact with the wall in between turns one and two after a part failure made him get a backup #99L out of his trailer.

Stewart Friesen also had issues during his heat race which kept him out of the draw for starting positions for the feature, placing him 16th on the grid at the drop of Joe Kriss’ green flag to start the event. Many thought that this would be the night that another driver would defeat Friesen in the feature event and take home “Mimi’s Bounty” which was worth $1,230 on top of the $3,711 winners share in the event on Wednesday evening.

They were wrong and now the bounty carries on until the August 15 event when they will again get a chance to defeat Friesen at his home track. If Friesen wins on August 15th however, half the bounty will go to him while the other half will be donated to charity. Sponsors of “Mimi’s Bounty” will all be named after the August 15th event as there will probably be some additional ones involved by then.

Paul Szmal, Jay Severson, and Jeff Ahlum were the announcing trio for the evening and when the initial green flag was dropped it was Sunoco Modified Rookie Adam McAuliffe taking the early lead after starting on the pole. Defending track champion Rocky Warner was the second-place car after both he and McAuliffe started on the front row for the event with mechanical issues slowing Warner in turn one just after lap one was completed. Warner was done for the evening at that point.

Another yellow flag slowed the field on lap three when invader Mat Williamson slowed on track and went to the hot pit to change a flat tire on the car. He restarted at the rear of the field with third place starter Billy Decker the new leader on the restart. The yellow flag was out again on lap four with Bobby Varin the new second place car on the restart. Decker held a straightaway advantage on lap seven until the caution came out and closed the field. Sixteenth place starter Friesen was in the fifth position at the time of the restart.

McAuliffe’s great run ended on lap eight when he slowed on track, pitted for a flat tire, and rejoined the rear of the field. On this restart Friesen was the new second place car and on lap 10 took the lead from Decker with a pass on the inside of turn four. At the halfway point in the event the top five consisted of Friesen, Decker, seventh place starter David Schilling, and 20th place starter Michael Maresca.

Friesen was in heavy lap traffic at this point but that all changed when the final caution of the event came out on lap 21 for Brian Gleason who came to a stop in turn three. Maresca was able to get by Schilling for the fourth position on lap 24 with Schilling dropping out of the event one lap later ending his fine top five run.

No caution was thrown for Schilling allowing Friesen to pull away until lap traffic slowed him slightly with only two laps to go. It didn’t slow Friesen down enough for anyone to mount a challenge however as the Sprakers, NY resident took home the seventh win of the 2020 season in eight events and the 67th of his career placing him into sole position of fourth place on the Fonda Speedway Modified All Time Win List.

Decker, Williamson who came all the way from the rear after pitting for a flat tire on lap three, Maresca, and 22nd place starter Danny Johnson completed the top five in the event.

“Jay Castimore worked his butt off on tires tonight and the Integra Shocks also got a real workout tonight as well,” Friesen told Mimi Lazzaro in the Fuccillo Automotive Group Mike Cole Memorial Victory Lane as Stewart and Jessica Friesen’s son Parker celebrated on the roof with the checkered flag. “And we’re not done yet as we will be back here at Fonda on the 15th.”

“I was running right through the center of turns one and two and made some hay there,” Friesen continued to say. “I really appreciate all of our Northeast fans and can’t wait until we can race with fans here again at Fonda.”

David Manchester and Cody Clark made up the front row for the $1,000 to win Swagger Factory Apparel Crate 602 Sportsman with Manchester taking the early lead. Brian Borst brought out the first caution in the event after a single car wreck on the inside of turn three. Borst was not injured but was done for the evening at that point with heavy damage to his race car.

On the restart, Clark took over the lead with JaMike Sowle now in the second position while behind him defending Swagger Factory Apparel Crate 602 Track Champion Tim Hartman Jr. went between Brian Calabrese and Manchester for the third spot on lap seven. Hartman went out of the race on lap 10 after breaking the suspension on the car in turns one and two while he was trying to mount a challenge on Sowle for the second spot.

The final caution flag flew on lap 19 and on the restart, Clark started to pull away leaving a great battle for the second position between Sowle and Calabrese the race to watch on track. Sowle and Calabrese swapped the second position many times after the race was restarted but when the checkered flag flew it was Clark sitting in victory lane in the Upstate Motorsports #4 Teo car after his second win of the 2020 season and the ninth of his career in the division.

“The track was pretty rough, but we were able to navigate it,” Clark said in victory lane. “We’ve been battling with this car all season and this week we changed bars and shocks and that worked. It definitely feels good anytime you stand in victory lane here at Fonda.”

The winners share of the Algonkin Motel Pro Stock feature was raised from $800 to $1,000 by a fan of the Pro Stock division at Fonda with Ivan Joslin leading lap one of the 20-lap event. Kenny Gates started the event in the third position, and he was the new race leader on lap two after getting by Joslin on the inside of turn four.

Nick Stone started the event in the seventh position and was the new third place car on lap three after he and defending Algonkin Motel Pro Stock Luke Horning both got by Joslin for the second and third spots. Stone was able to pass Horning for the second position and started to apply heavy pressure on Gates for the race lead on lap six.

The halfway point showed Gates, Stone, Horning, Joslin, and Pro Stock Rookie Tanner Warner in the top five but that all changed two laps later when Stone got by Gates on the inside of turn four after Gates slipped high out of the groove in the turn. The race to the win was between the top two cars of Stone and Gates until the checkered flag as they were a straightaway ahead of the third-place car of Horning.

Gates pressured Stone heavily over the last three laps of the event but Stone hung on for his sixth win out of seven events at Fonda in 2020 with Gates, Horning, Joslin, and fifth place starter Andy Graves completing the top five in the event at the checkered flag.

“I was able to get by Kenny (Gates) on the bottom when he slipped up in turn four,” Stone said in victory lane. “But after trying the outside I knew that I had better get back down to the bottom because Kenny like to run down there.”

The next race at Fonda will be “Championship Night” on Saturday, August 15 when “Mimi’s Bounty” will again be available to any driver who can defeat Friesen in the Sunoco Modified feature event. Championships will be crowned in all divisions on the 15th with any further announcements being made on the Fonda Facebook page or the track website.